With the countdown to the 2020 NTT IndyCar Series season in high gear, INDYCAR is highlighting the events on next year's calendar. Featured here: The Chevrolet Detroit Grand Prix presented by Lear, which begins public sale of tickets Tuesday:

The Location: The event has its roots as a Formula One race on Detroit’s downtown streets. John Watson won the first race in 1982, and it was one of three F1 races in the U.S. that year (Long Beach and Las Vegas were the others). Ayrton Senna won the last three F1 street races (1986-88) before CART took over. CART staged three events downtown before the move to Belle Isle (two races won by Emerson Fittipaldi, the other by Michael Andretti). In 1992, the current home was adopted and, like today, it became the first race on the schedule following the Indianapolis 500.

Brief Interruptions: Belle Isle hasn’t continuously held Indy car races. There was a six-year break starting in 2002 and a four-year break after the 2008 race. Following the success of Super Bowl XL in Detroit in 2006, Roger Penske, who served as Chairman of the city's Super Bowl host committee, spearheaded the revival of the grand prix. The economic recession forced the second postponement, but the grand prix returned in 2012 thanks to the support of General Motors, with Chevrolet coming on board as the title sponsor of the event. 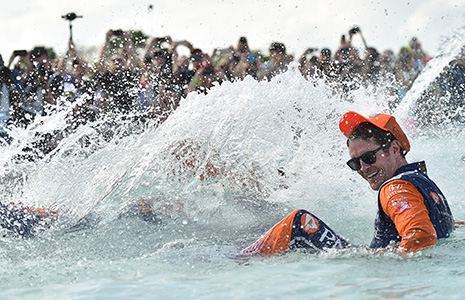 Famous Fence: Helio Castroneves became known for climbing fences at Indianapolis Motor Speedway, but he actually did it first in the 2000 Detroit race. That was his first Indy car victory, and it happened to be in the home race of his team owner, Roger Penske. Castroneves was just 25 years old at the time, and it was his first season driving for Team Penske. Success continued thereafter. The Brazilian won two more races later that season (at Mid-Ohio and Laguna Seca) and won Detroit again in 2001 as part of a four-win season. The first of those four races was the 500 and the more memorable fence climb. In recent years, Detroit race winners have celebrated by splashing in the James Scott Memorial Fountain, which has hosted the event's winners the past two years.

Repeat Winners: Given there have been 27 races on this temporary street circuit, surprisingly there have been only three back-to-back winners: Castroneves was the first, Sebastien Bourdais the second (2015-2016) and Graham Rahal the third (both races on the same weekend in 2017). Castroneves and Scott Dixon are the only three-time Belle Isle winners.

Double the Fun: In 2013, the Chevrolet Detroit Grand Prix became one of three IndyCar Series venues to host two races in one weekend, joining the Toronto and Houston street course events. Since 2015, the Chevrolet Detroit Grand Prix presented by Lear has hosted the only doubleheader race weekend on the NTT IndyCar Series schedule. The unique format has created some memorable moments, including Team Penske winning both races in 2014 with Will Power and Castroneves and Graham Rahal sweeping the weekend with back-to- back race wins in 2017 -- 25 years after his father won the first race on Belle Isle.

How it Happened: Watch a recap of this year's doubleheader in these editions of Fast Forward -- Race 1 and Race 2.