The Wheldon boys are about to make their quarter-midget debut -- and their first direct competition with each other in the same class -- and the good-natured trash talking has commenced.

“This will be the first time the boys are actually racing in the same class,” said their mom, Susie Wheldon. “In karting, they’re in separate classes. They have that rivalry and competition there, but it’s nice to have that separation. There’s definitely been some smack talking leading up to this event because they’re going to be racing together. I’m like, ‘Oh, gosh. I don’t know if this will work for me to try to referee it all weekend.’ But they’re super excited to be here.” 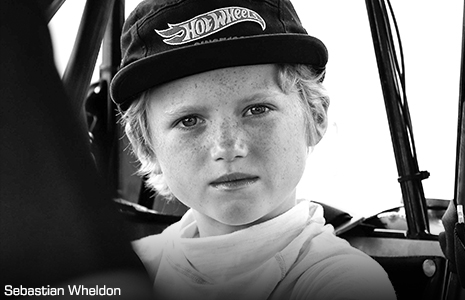 Sebastian Wheldon, 10, and Oliver Wheldon, 8, will compete in USAC .25 Midgets portion of the third annual Battle at the Brickyard, which begins Thursday at Indianapolis Motor Speedway. The sons of the late Dan Wheldon are experienced karters, but this will be the first time in quarter midgets and first time on an oval.

The cars are smaller versions of full-size midget cars, capable of top speeds in the 30 mph to 45 mph range, depending on the class. Unlike karts, quarter midgets compete exclusively on ovals. The Wheldons tested recently in Florida to become accustomed to the cars, oval racing and racing together.

“It was like a whole new experience,” Susie Wheldon said. “It’s totally different than karting. You don’t race on an oval in karts, and the track looked so small, but they jumped right into it. It’s wild to see them out there on an oval. They went out there at one point together and passed each other to get used to how it feels. They’re not used to turning left only.”

Dan Wheldon, the two-time Indianapolis 500 winner who died in a crash at Las Vegas Motor Speedway in October 2011, wanted his sons to have the opportunity to try karting, and Susie has carried out those wishes. When Sebastian was 4 years old -- the same age at which his dad first started karting -- he received his first kart. Oliver started shortly after that.

“It wasn’t really a question,” Susie said. “It was like, ‘We’ll get them in it and see what happens.’ It started as local stuff and then progressed to national races. I always said I’d try to give them the best opportunity that I can with it and see how far it takes them. They definitely are into it.”

In March, the boys participated in Kart 4 Kids, a charity event before the Firestone Grand Prix of St. Petersburg not far from the family’s home in St. Petersburg, Florida. The Battle at the Brickyard will be the boys’ third consecutive weekend of racing, following a regional championship last weekend at Andersen RacePark in Palmetto, Florida, and an event in Orlando the weekend before that.

“We’ve been super busy in the karting world this year,” Susie said. “It’s been nuts. We’re having to coordinate everything with school and summertime and all of that, but they’re really enjoying it. We’re three weeks in to back-to-back races. It feels like we’re on an INDYCAR schedule in some ways.”

The boys have a familiar sponsor in Hot Wheels. In February 2011, Dan Wheldon played himself in an episode of Hot Wheels Battle Force 5, an animated TV series. A mystery racer in the episode, Wheldon is unmasked by the show’s lead character, Vert Wheeler, causing his sidekick, Spinner, to faint.

Wheldon: “The Lionheart. In the flesh.”

(Spinner gets so excited, he passes out.)

So perhaps his sons racing together on an oval for the first time at Indianapolis Motor Speedway isn’t so much coincidence as destiny.

“I’m not sure the decision is mine anymore,” Susie Wheldon said. “They’re driving the bus. People sometimes say, ‘I can’t believe you let your kids race.’ I’m like, ‘Well, it’s not really up to me. It’s up to them.’ As long as they want to go after it, I’m happy to help them any way I can.”