The Hulman-George family, along with Roger Penske, were honored Tuesday at the Indiana Statehouse for their stewardship and commitment to the iconic Indianapolis Motor Speedway and INDYCAR.

Tony Hulman purchased the Speedway in November 1945, taking a rundown facility and turning it into the world's most famous racing venues.

Penske, whose race team has won the Indianapolis 500 on a record 18 occasions, officially purchased IMS and INDYCAR on Monday.

Penske was joined at the event by his son, Greg, Tony George, Mark Miles and Indiana Gov. Eric Holcomb. 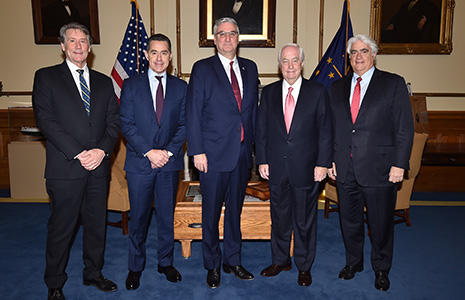 A CONCURRENT RESOLUTION honoring the legacy of the Hulman-George family and celebrating the incoming leadership of Roger Penske and the Penske Corporation at the Indianapolis Motor Speedway and INDYCAR.

Whereas, since that time, members of the Hulman-George family have served as faithful stewards of the Racing Capital of the World, “The Greatest Spectacle in Racing” and INDYCAR;

Whereas, 74 years of Hulman-George family leadership have produced many historic firsts and milestones, including the sold-out 100th Running of the Indianapolis 500, the inaugural Brickyard 400 and the debut of life-saving SAFER Barrier technology;

Whereas, as we collectively mark the beginning of a new decade, we also recognize a new era of leadership at the Indianapolis Motor Speedway and INDYCAR;

Whereas, Roger Penske is an individual supremely prepared to preserve and further the legacy of IMS, the Indianapolis 500 and the IndyCar Series;

Whereas, Roger Penske is also the Founder and Chairman of Penske Corporation, a global industry leader that employs more than 64,000 individuals and manages more than $32 billion in global revenue;

Whereas, Roger Penske’s leadership principles include a commitment to civic growth and philanthropy, highlighted by his service as Chairman of Super Bowl XL and Penske Corporation’s support of many worthy charities and causes;

Whereas, Roger Penske is also a recipient of the highest honor bestowed on an American civilian, the Presidential Medal of Freedom, and many other prestigious awards and honors, including induction in the Sports Broadcasting Hall of Fame and NASCAR Hall of Fame;

Whereas, Roger Penske’s commitment to excellence, growth, integrity and innovation in all his endeavors will now guide and serve the Racing Capital of the World, North America’s pre-eminent open-wheel motorsports series and race fans everywhere; therefore,

Be it resolved by the House of Representatives of the General Assembly of the State of Indiana, the Senate concurring.