The circuit: The 17-turn, 2.3-mile picturesque permanent road course is nestled in the woods a short distance west of Birmingham, Ala. The best seats are on the numerous hillsides, particularly in Turn 2 where the run down the hill (see above) offers action aplenty. The big screen adds to the experience.

Key information: This event has always been held in April, but it has bounced around in terms of specific weekend and order in the NTT IndyCar Series schedule. This year, the Honda Grand Prix of Alabama will be the second race of the season, following the Firestone Grand Prix of St. Petersburg (March 13-15).

Tickets on sale: The link to tickets is here, and note the opportunity to drive your personal car around the track. That's rare and worth consideration. 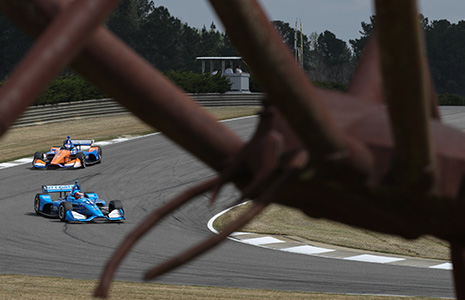 Last year: Rahal Letterman Lanigan Racing drivers Takuma Sato (pictured below) and Graham Rahal dominated the 2019 weekend, taking the top two positions in qualifying and leading 75 of the 90 laps. Sato, who led 74 of those laps from the pole, scored the fourth race victory of his career and the first of two wins in 2019. Watch the 30-minute cutdown of the race here.

Over the years: Team Penske drivers have been the most dominant, with Josef Newgarden winning two of his three Barber races for Roger Penske -- the other was with CFH Racing in 2015, which was his first career IndyCar Series victory. Twice, Team Penske has won three consecutive races at this track, and it won eight of the first nine poles. In 2011, Will Power won by leading every lap, the only time a driver has gone wire to wire there. The team has the widest margin of victory at Barber (13.7476 seconds by Simon Pagenaud over Graham Rahal in 2016) and the narrowest victory (0.5703 seconds by Helio Castroneves over Scott Dixon in the inaugural race in 2010). Watch the Castroneves victory here.

A gem of a museum: A visit to the Barber Vintage Motorsports Museum is a must. It houses an incredible motorcycle collection, including the Britten V1000, a radical departure from conventional racing motorcycle design. Its creator, John Britten, built the bike from scratch on a shoestring budget in his backyard workshop in New Zealand. Only 10 such bikes were created. Its pink and blue colors, along with a lightweight carbon fiber body, make it an eye-catcher.

Art aplenty: A visitor's to-do list should include walking around the facility to see all the unusual art mixed into the scenery. It's not only unique, it's interesting (see insert).