The circuit: With more than 4 miles of tree- and camper-lined track, Road America and its 640 acres offer one of the most beautiful layouts in American motorsports. The run down to Turn 12, known as Canada Corner, is spectacular, and the cart path through the woods is a must take. There's a reason Road America is known as "America's National Park of Speed." 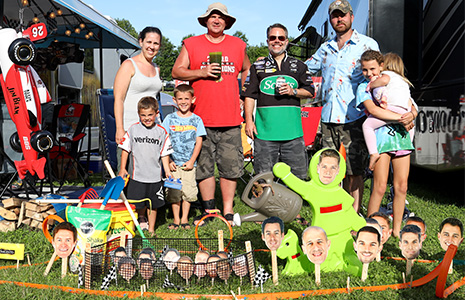 Tickets: Click here for tickets to the Rev Group Grand Prix presented by AMR. The facility has open seating and some of the best campsites in sports. Consider renting a golf cart for the weekend.

Caution-free: Alexander Rossi’s dominating 2019 race victory was in part due to the fact there were no cautions to allow the field to match his blazing Andretti Autosport Honda. Rossi won the race by 28.4 seconds, which amounted to more than a half of a second gained per lap. That the race went without a caution wasn’t all that unusual for Road America – it had happened nine times previously in 28 events.

Good from start to finish: Not only is the Road America circuit one of the best driving tests in U.S. road racing, it effectively is the same configuration as it debuted in the fall of 1955. Not many tracks can say that.

The original road course: As is the case in Watkins Glen, N.Y., it is possible -- even encouraged -- to drive through the county to experience the public-road path drivers raced on prior to the private circuit opening a few miles to the south. In 1950, the road course was 3.3 miles in length, and it was lengthened to 6.5 miles in 1951 and '52. Both routes passed through the quaint town of Elkhart Lake, where a state historical marker notes the start and finish line. The beauty of the original Elkhart Lake course is the names of some of the corners. There's Hamill's Hollow, Schoolhouse Straight, Kimberly's Korner, Dickens' Ditch and the Marsh Turn, among others. It's definitely worth the drive and it won't be difficult to imagine drivers zipping along. John Fitch won the '51 race by completing the 30 laps in two hours, 30 minutes -- an average speed of 80.8 mph. See the map here.

Cold calling: Among all of the competitive action that takes place at Road America, there's an option to take a winter driving program at the track. Seems appropriate for a part of the country that receives its fair share of snow.

September fun: Road America, which is located 18 miles west of the famed Whistling Straits Golf Course, is offering options for fans attending the 2020 Ryder Cup, which will be held Sept. 25-27. Road America's many overnight choices -- cabins, glamping and general camping -- can be seen here, and there are plenty of walking and bike trails to utilize. There's also an 18-hole disc golf course, and did we mention the brats?