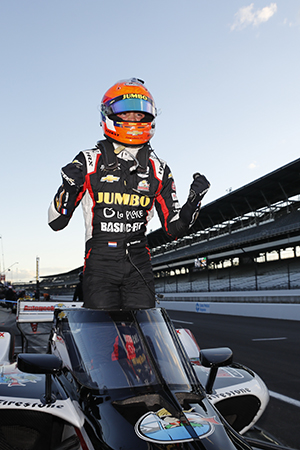 “It was tough,” VeeKay said. “I was not very happy with the car this morning, but (Team Manager) Tim (Broyles) and I sat down and we found some great stuff. A lot of work was put in here. I put in a good lap, so I’m very happy with that. Finally, finally, my first pole.”

Defending NTT INDYCAR SERIES champion Josef Newgarden will line up alongside VeeKay in second. Newgarden, who is second in the point standings, was awarded one point for setting the fastest time in Group 1 with a time of 1:10.4706 in the No. 1 Hitachi Team Penske Chevrolet.

The additional point for Newgarden could be beneficial in his quest for a third Astor Challenge Cup. Newgarden has steadily cut into points leader Scott Dixon’s edge over the last month. He entered this event down 72 points and will start Friday’s race with a deficit of 71.

Newgarden locked in the fastest time after a bit of luck.

With four minutes left in Group 1, Takuma Sato, the 2020 Indianapolis 500 presented by Gainbridge winner, went off track in Turn 4 and got stuck in a gravel trap, forcing a red flag. Sato was pulled out of the gravel and refired with 1:20 left in the session. However, with track cleanup still required, that brought an end to the session.

“That’s probably the luckiest we’ve been as far as yellow flags go this year,” Newgarden said. “I just wish we had gotten it in the race, but we’re not going to complain. We were quick on blacks (primary tires). The car felt awesome right out of the box. Some of the issues we were struggling with in practice were gone. You couldn’t see super well in Turn 12 or Turn 13, so you were guessing a little bit coming on to that front straightaway. But it made for an interesting session.”

With the lack of time in Group 1, Dixon was unable to return to the track to set a faster time in the No. 9 PNC Bank Chip Ganassi Racing Honda. Dixon, who won July’s GMR Grand Prix at IMS, will start 12th..