INDYCAR is going racing again, virtually that is.

Each race will be streamed live on indycar.com for the enjoyment of racing fans while the current 2020 NTT INDYCAR SERIES season is suspended through April as a result of the coronavirus situation. While indycar.com will serve as the primary live streaming source, there also will be secondary platforms to watch the virtual race events each week – INDYCAR’s YouTube and Facebook Live as well as iRacing’s Twitch.

Each virtual race event, which will last approximately 90 minutes to two hours, will begin at 4 p.m. ET each Saturday through May 2.

To enhance the fan experience, INDYCAR will conduct a 15-minute, pre-race virtual autograph session with several of the participants beginning at 3:15 p.m. each week. There also will be a live interview with the race winner by post-race host Katie Hargitt on INDYCAR’s Instagram immediately following the conclusion of the race.

The inaugural INDYCAR iRacing Challenge race venue will be selected through bracket voting by fans today through Thursday. Fans can vote daily on the track match-up in the bracket to determine which venue will advance to the next round. The voting, which has a 12-hour window beginning 10 a.m. daily after today, is available through the @INDYCAR Instagram or Twitter handle and online at indycar.com/iracing.

The INDYCAR iRacing Challenge events will feature qualifications in addition to the races. Teams will be able to design car liveries to match their desired paint schemes. To further give the action an authentic look and feel, each car will be equipped with INDYCAR’s new Aeroscreen, a revolutionary cockpit-protecting device introduced for the 2020 season.

The INDYCAR iRacing Challenge will not crown an overall champion but will add a special element where INDYCAR will make a donation to one of its partner charities.

An entry list of the drivers participating, along with the bracket-winning race venue for the opener, will be announced next week. 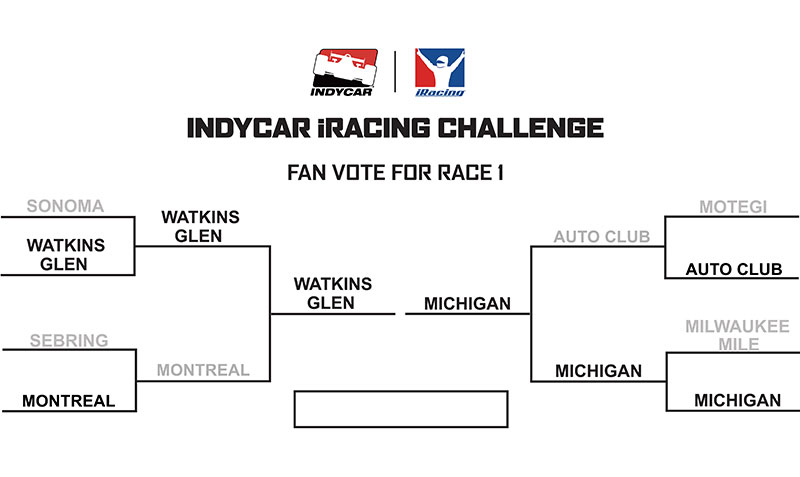