Entering its 37th season of competition, Dale Coyne Racing has a long and storied history in Indy car racing. Starting in 1984 as an owner/driver, Dale Coyne ran seven seasons in CART, including two attempts for the Indianapolis 500 in 1988 and 1989. In 1990, he focused his efforts on the tutelage of several up-and-coming drivers. 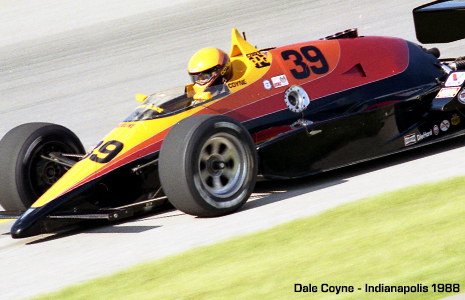 From Dean Hall in 1990 to Paul Tracy in 1991 and beyond, Coyne's ability to help and coach drivers has paid dividends to the drivers who have competed with his seasoned team.

Prior to making the transition to the IndyCar Series following the unification of American open-wheel racing, the team competed in the Champ Car World Series. In 2007, driver Bruno Junqueira recorded back-to-back-to-back podium finishes (Zolder, Belgium, Assen, Netherlands and Surfers Paradise, Australia) on route to a seventh place finish for the year.

In 2008, the team's first year in the IndyCar Series, drivers Junqueira and Mario Moraes recorded five combined top-10 finishes and both drivers led several laps during the famed Indianapolis 500.

In July 2009, the team celebrated its first win with Justin Wilson at Watkins Glen. Wilson would also win at Texas Motor Speedway in 2012, and Mike Conway added a third in the first race of the 2013 Belle Isle doubleheader weekend. Rookie Carlos Huertas made a surprising run to the checkered flag to win the first Houston race in 2014, notching the team's fourth career triumph while Sebastien Bourdais marked his return to the team by winning the 2017 season opener at St. Petersburg.

Also in 2017, Bourdais was on his way to a pole position at the Indy 500 prior to an unfortunate accident that sidelined him for nine races. The driver of the #18 machine was running 1.5mph quicker than eventual pole winner Scott Dixon when he lost control of his #18 machine in Turn 2 of his third qualifying lap.

In 2018, DCR formed a collaboration with Jimmy Vasser and James Sullivan, to run its #18 entry with Sebastien Bourdais under the Dale Coyne Racing with Vasser-Sullivan name for two seasons.