There’s a reason it’s called Team Penske. The emphasis has always been on the team, especially at the Indianapolis 500.

With 18 Indy 500 wins, Team Penske is the winningest team in the history of the famed race. Much of that has to do with the outstanding teamwork provided by the incredible collection of talent.

IMSA General Manager, Acura Team Penske and longtime INDYCAR crew member at Team Penske. He has been a part of 13 of Team Penske’s 18 Indianapolis 500 victories.

“Obviously, there are a lot of great memories,” Bouslog said. “But if I had to pin down on one of them, it was the 2001 win with Helio Castroneves. We went back five or six years after we didn’t qualify in 1995 and the gut punch that was. I was project leader of the Indy Racing League program that was started up in 2001. That, to me, was huge. There was a lot of pressure on that race, not to mention the fact we were doing CART simultaneously. It was the dance of uniforms and the whole thing, from stem to stern, was totally different. The Friday before the race, we were told we couldn’t run Marlboro on the cars, and we had to take decals off and paint everything.

“We had a small paint shop in Indianapolis that let us paint our cars over there.

“To not qualify in 1995 and living through that, it was so hard. To have the opportunity to go back and be project leader of going back. I understood what it meant to do well there. I never worked so hard in my life … to understand every detail was exhausted.

“We had a lot of unfinished business after missing the field in 1995 and not returning until 2001. Plus, we finished 1-2 in that race.”

“My favorite Indianapolis 500 is 2009 when Helio Castroneves did the ‘Triple Crown’ by winning the pole, pit stop competition and the race,” Rinaman said. “To do all three of those is tough. It gives everybody a piece of the pie. The crew gets recognized for the pit stop competition. The race and the performance for the month of May, for all of the wheels to turn in the same direction, that’s an accomplishment, not just for the driver, but all of the participants.” 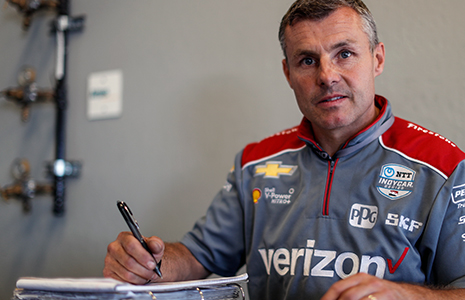 “My first time I arrived there was in 1994 when we were running the Penske chassis at that time,” Jonsson said. “That’s always a big memory. The first time I was involved with my driver winning it was Helio Castroneves in 2001. When I climbed the fence, that is when I realized how big that event really is. Prior to doing that, you hear all about it and read all about the history and everything else, but once you are on a team that won it, you really understand. Doing it with Team Penske, Roger values that race more than any other in the world.

“To be able to win as a crew chief three times with three different drivers, with Roger Penske on the scoring stand for two of those three times, is quite an experience.

“But the one that really sticks out for me is Sam Hornish Jr’s win in 2006. He had a dominating month before things went askew with a pit stop late in the race, and then he came roaring back to win the race. That, to me, is the most outstanding memory at the Indianapolis 500.”

Longtime crewmember who began with Team Penske since Bobby Unser won the 1981 Indianapolis 500.

“I’ve had so many great memories; it’s tough to narrow down which was the best one, but I’m going to have to go with my first one in 1981,” Haslett said. “I was just a kid. I was 22 years old and had just gotten out of the Navy. I went out with my uncle Harold Cummings to help set up the garages, and we stayed in the Turn 2 Suites that Mr. Penske had at the time.

“I had just got out of the Navy and been all over the country but to be able to drive out from Pennsylvania to Indiana was a first, seeing the country out west.

“That started me in racing. We had three cars in the race, and I was assigned to the Norton Spirit with Bobby Unser. I worked with truck driver Carl Nordman. We had a 48-foot trailer, and all three race cars were in that trailer. I was just a ‘go-fer.’ I remember running out to the truck a lot to get different springs and things we needed at the time.

“To top it, we won that year with Bobby Unser. Being on that car, it got me hooked. It was my first race, my first trip to Indianapolis, and we won the race. It has gone from there.

“Thirty-nine years later, I look back at how much I have really enjoyed that experience.” 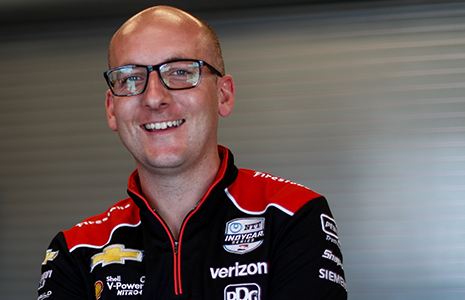 “You think of all the good times,” Law said. “We have been successful and won some races, but it’s the hard days that you remember. One of those was when Helio Castroneves went upside-down in 2015, and we got him back out the same day. It didn’t happen on Race Day, but I look back at that and the teamwork it took to make that happen. I’ll never forget that, but that is what I look back at the most.

“That was one of our first qualification runs where we went out early and were trimmed out. We thought we were done for the day and were going to get the spare car out. But Helio was one of those guys that wanted to get back out. He wanted to put that behind him and move forward. Roger Penske is much the same way. They were in our ear every half-hour. It started off very methodical, and then everybody realized it was possible.

“It came down to the end with help from everybody. There was bodywork from three different cars on that car to get it back on track. That was such a cool moment. The second lap was flat. It showed the confidence he had in us, and it took a lot of people to make that happen.”

“The most memorable one for me was 2018 when Will Power won,” Atkinson said. “I had been there for a win with the team, but that was the first time a car that I was directly involved won the Indianapolis. This will be my 12th year with Power as the driver.

“From the engineering stand, it’s like putting together a puzzle. Sometimes, the world aligns, and it happened in 2018 when we were finally able to close it out.”