Some of the greatest names in racing have been part of the fabled history of the Chevrolet Detroit Grand Prix presented by Lear. The race has been a key part of Motown since Formula One’s John Watson drove a McLaren MP4-1B Ford Cosworth to victory in the 1982 United States Grand Prix.

That event brought the world to America’s Motor City, starting a seven-year run in Formula One that was culminated by three-straight victories by the legendary Ayrton Senna from 1986-88. 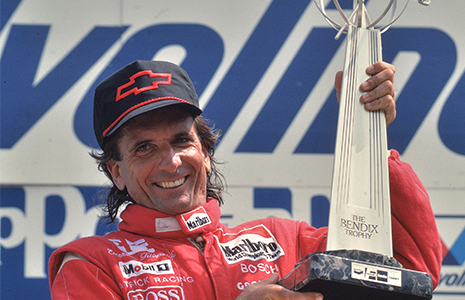 In 1989, it became part of INDYCAR as CART ran on the streets of Detroit from 1989-91. Big names won each year, including Emerson Fittipaldi in 1989, just three weeks after he earned the first of his two Indianapolis 500 victories. Michael Andretti won in 1990 and Fittipaldi again in 1991.

The race got a new home in 1992 when it was moved to Detroit’s Belle Isle. Bobby Rahal was the first winner at the Belle Isle course after contending for the victory during the previous Detroit Grand Prix contests held on the downtown circuit.

“When CART became the star attraction at Detroit in 1989, it was like Long Beach; everybody was happy to take over that race to be in Detroit,” Rahal said. “The downtown track was a long one and had some long straightaways and fast corners. It also had railway tracks, which was unusual for a racecourse.

“To me, the Belle Isle track was a big improvement. It’s even better now than the first year when they lengthened the track. I finished second twice on the old track in downtown Detroit, but it was a good, challenging circuit. Belle Isle, being on the island in a park-like setting, was a pretty good move.”

Although the Detroit Grand Prix has been paused three times since then, from 2002-2006, 2009-2011 because of an economic downturn and this year because of the COVID-19 pandemic, it always makes a comeback.

The Chevrolet Detroit Grand Prix presented by Lear will not be held this weekend, but Event Chairman Bud Denker and his staff are hard at work preparing for next year’s return.

After all, Detroit never gives up and has come back against the odds more than a few times in recent decades. 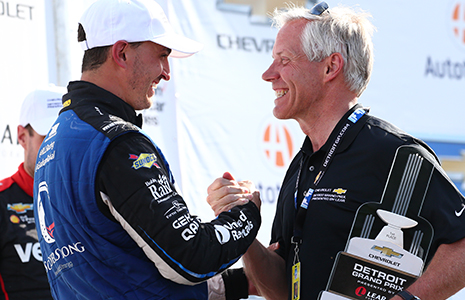 “That shows the grit that we have, the never-give-up mentality that we have in our organization for the Grand Prix and also the community and our city,” Denker said. “Yes, we had to take a pause in 2009, 2010 and 2011 and a pause again this year. Our city was bankrupt in 2013, but look where it is now.

“That was a great looking glass for us and the fabric of who we are. We work hard. We want to put on an amazing event for our city, make the state proud and the city proud. It’s another indication of the results-focused effort we have for Detroit and for the Grand Prix, as well.”

Over the years, the Chevrolet Detroit Grand Prix presented by Lear has created many memorable moments and a few surprising twists that have made this event truly unique.

Both Mario and Michael Andretti had an odd Father’s Day celebration when they both made contact with the safety vehicle in final downtown Detroit race in 1991, Paul Tracy knocked his Team Penske teammate Al Unser Jr. out of the way to win in 1994. In 1997, PacWest teammates Mauricio Gugelmin and Mark Blundell both ran out of fuel late in contest, which cleared the way for Greg Moore’s victory.

In 1999, the pace car leaked fuel late in the race as Dario Franchitti held on for the win. A young driver from Brazil scored his first career INDYCAR win in 2000. In his excitement and confusion, he pulled off the racecourse and climbed the fence to celebrate with the fans.

It was Helio Castroneves, and his fence-climbing move earned him the nickname “Spiderman.” It became his signature victory celebration. 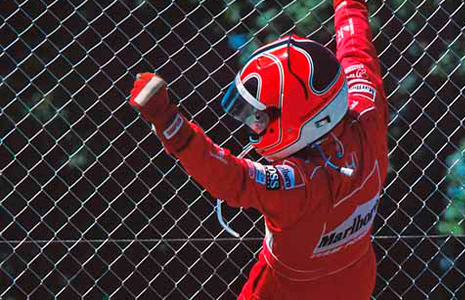 Castroneves won again at Detroit in 2001, before the race fell off the schedule until the Downtown Detroit Partnership and Penske Corporation revived the event in 2007.

“When we announced in 2006 that we were going to bring back the Detroit Grand Prix, I had no idea about putting a race on or about Belle Isle,” Denker said. “We put in $7.5 million worth of investments into the island after Detroit hosted the Super Bowl in January and then we had the race on Labor Day. We had the summer to make sure the paddock was paved, the casino was operational, the marble was refinished and the Scott Fountain worked again. None of that worked because it was derelict for many years, and the city couldn’t take care of it.

“We had to repave a lot of the track and resurface areas. We put new bridges in. It was 2007 when we helped Belle Isle take off. Now with the state of Michigan running it, their investment, our investment and others, as well, the island has come to the point where it is today.”

Tony Kanaan won the Labor Day weekend return at Belle Isle in 2007. Justin Wilson was the victor in 2008. Later that fall, the United States economy crashed, and the race was paused for three more years before it was revived in 2012, with the support of Chevrolet as the title sponsor of the event held just down the road from its world headquarters. Scott Dixon scored his first win on Belle Isle in 2012.

The following year, Detroit became a double-header weekend with full NTT INDYCAR SERIES races hosted on the island both Saturday and Sunday – the Chevrolet Dual in Detroit.

Team Penske doubled down in its “home” race in 2014 with Will Power winning the first Dual followed by Castroneves securing his third Detroit win Sunday. Graham Rahal made history by sweeping both races in the same weekend in 2017. Last year, Team Penske’s Josef Newgarden won the Saturday contest, and Dixon came back to win Sunday for his third Belle Isle victory.

Bobby Rahal has played a part in every Chevrolet Detroit Grand Prix since 1989, and he understands the importance of the event and the history.

“It’s Motown, so it is important,” Rahal said. “That is why we have to keep going back there. They have made so many good improvements over the years to the track. Not only is Detroit a big market, it’s an ever-improving market. Downtown Detroit is changing dramatically and getting better. Companies are moving back in, and people are moving back in.

“It’s important for us to be there.”