It’s a weekend of celebration for the legendary Al Unser, but he has to wait until July to get his special gift.

On Friday, May 29, Unser celebrates his 81st birthday in Chama, New Mexico. On Saturday, May 30, he gets to celebrate the 50th anniversary of his 1970 Indianapolis 500 victory in the famed Johnny Lightning Special.

BorgWarner is creating a special retro “Baby Borg” trophy to celebrate the golden anniversary of Unser’s first win at the Indianapolis Motor Speedway. It will be presented to him in July at the Unser Family Racing Museum in Albuquerque, New Mexico, as the original plan to present the trophy in April was delayed due to the COVID-19 pandemic.

“I think it’s a great honor,” Unser said. “I complained about not receiving one ever since Parnelli Jones got his Baby Borg Trophy in 2013. I asked, ‘Where’s mine?’ They said, ‘It’s coming one day, maybe.’

“It’s totally an honor for this to happen. I’m really tickled to death to still be here accepting it. I just can’t say enough for the BorgWarner people for doing this for us old drivers.”

Retro Baby Borgs commemorate the 50th anniversary of past Indianapolis 500 winners who did not receive an actual Baby Borg but a Borg-Warner plaque. Retro Baby Borgs were first given out in 2013 when Parnelli Jones collected his Baby Borg as part the Baby Borg ceremonies during the North American International Auto Show that January.

Parnelli's was a surprise - he thought he was at the event to help give his friend Dario Franchitti his third Baby Borg following his 2012 win at IMS. A.J. Foyt has an owner’s Baby Borg from his win in 1999 with Kenny Brack, and Bobby Unser has a Baby Borg he was given as part of a ceremony in 2003 when Helio Castroneves accepted his Baby Borg for his 2002 win.

Last year on the morning of the Indy 500, Mario Andretti accepted his retro Baby Borg for his 1969 victory as part of the pre-race ceremony on stage in front of the Pagoda before a worldwide television audience.

The retro Baby Borg Trophy has turned out to be one of the most popular and heartwarming initiatives from longtime Indianapolis 500 sponsor and NTT INDYCAR SERIES partner BorgWarner.

“It’s a way to keep and honor the traditions of the past and connect it to the present,” said BorgWarner Director of Marketing and Public Relations for the Americas Michelle Collins. “We feel it is very important for us as BorgWarner to do and take a lot of pride in honoring the past winners.

“The best part for me is when we make that initial contact and reach out to a previous winner and let them know that we, as BorgWarner, want to do this for them and have worked together to create a very special event around it.

“It is so humbling how excited they are, some even to the point of tears. It’s really an honor for me to be the one to reach out and do this. They really appreciate it.”

World-renowned sculptor William Behrends of Tryon, North Carolina, has created every winning driver's image on the Borg-Warner Trophy since 1990. Behrends has created 30 of 34 images on the "base" of the trophy.

First seen at Indianapolis Motor Speedway in 1936, the Borg-Warner Trophy stands 5 feet, 4 ¾ inches and weighs 110 pounds. Behrends also has sculpted the retro images for the Baby Borgs of Jones and Andretti using images from 1963 and 1969, respectively.

In addition to his images on the Borg-Warner Trophy, Behrends has sculpted statues and busts ranging from Willie Mays to Ben Hogan to Spiro T. Agnew.

“The drivers can’t take home the real trophy,” Collins said. “It’s a neat way for us to give them a memento, for the owners of the team as well as the drivers. We’ve seen different places they take the trophy or things they do with it. It’s a source of pride. They love them.”

Behrends sculpted a sterling silver retro likeness using photos of Unser taken during May 1970, including qualifying, winning the pole, the front row photo, Victory Lane, the day after the race and Victory Celebration images to depict an authentic time period likeness of “Big Al.”

“I can’t deny that it’s hard,” Behrends said. “It’s harder, more time-consuming and painstaking. I have to assemble as many good photos as I can. The value of doing a current guy is we meet with a new winner the day after the race, take photographs from all different angles under the same light. I deal with contours and that really allows me to see the shape and volume of things.

“Here, I’m dealing with historic photos from different times, so it takes a while to put the image together. In the end, it’s the same product and try to bring it to the same standard as the others.”

“It’s really gratifying to me because I watched the 1970 race on ABC’s ‘Wide World of Sports’ and know the Unser name,” Behrends said. “These are my heroes from my younger days. I get to reminisce and bring that emotion to it.

“I have deep respect for these guys – the greats of INDYCAR racing like Parnelli Jones, Mario Andretti and the Unsers.”

As an artist, Behrends can recognize little details in each driver’s face that makes them unique and brings out their personality in the sterling silver image. 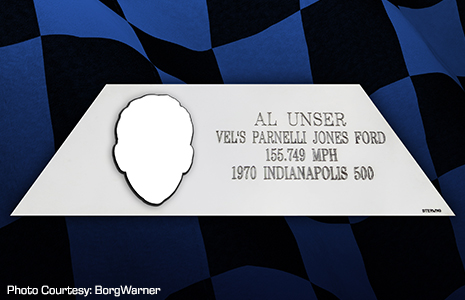 “The guy has aged well over the last 50 years,” Behrends said of Unser. “He looks good now, and it’s 50 years later. He has a nice head of hair, and that is interesting to do in sterling. He has a good, warm, smiling face. He was also very stylish of the time.

“I remember well what the world looked like back then. I graduated college in 1968, and it’s fun to look back on that. It’s a beautiful trophy, a wonderful recreation of the real thing.”

Unser’s 1970 win was a dominating performance where the outcome was never in doubt. Team owners Vel Miletich and Parnelli Jones created the famed “Colt” chassis. Fabled chief mechanic George Bignotti was in charge of the car, and the pit crew performed magnificently.

“That weekend just worked out lovely,” Unser said. “You can’t ask for a better day.

“But the thing about it is I had a lap lead on everybody with about five or 10 laps to go. I just started slowing down. I didn’t want those things to happen. I didn’t want the car to break at the last. I was very careful. Parnelli got shook up because I was slowing down so bad, but I had it made.

“Why take a chance when you are that close?

“Everything went so good in 1970, you think back, ‘Why wasn’t every year like that?’ It just doesn’t happen like that. The Indianapolis Motor Speedway is a funny place. Some days it smiles on you and some days, it frowns. I wanted to make sure everything went good.”

Unser won it again in 1971, becoming the first back-to-back Indianapolis 500 winner since Bill Vukovich in 1953 and 1954. Unser scored his third Indianapolis 500 victory in 1978 driving for team owner Jim Hall in the famed Chaparral.

In 1987, Unser didn’t have a ride at the Indianapolis Motor Speedway when the month began but replaced Danny Ongais as Penske Racing after Ongais crashed in practice. Unser climbed into a year-old show car that had been on display at a hotel lobby in Reading, Pennsylvania, and put it in Victory Lane at the Indianapolis 500, becoming the second driver to win four Indy 500s in his career. Foyt was the first driver with four Indy 500 victories in 1961, 1964, 1967 and 1977. Rick Mears is the only other four-time winner with Indy wins in 1979, 1984, 1988 and 1991 – all for Team Penske.

“It’s an honor to be in that class with A.J. Foyt and Rick Mears,” Unser said. “People have asked me 100 times if there will ever be another four-time or a five-time winner? Yes. That’s why we keep records through all racing activities. It will happen one day, whether it’s Helio Castroneves or someone else who gets four.

Unser is in the twilight years of his life, but the face on his retro Baby Borg will be timeless. It harkens back to his days as a young man, on the cusp of an outstanding career that made him an Indy 500 legend.

“I can’t wait to return to the Speedway in August,” Unser said. “The Indy 500 is going to be the same whether it is May or August.

“When I get there, I get those trembles of excitement that you get when you compete. It brings back a lot of memories. The race fans are wonderful back there, and I look forward to being able to face them again.

“For now, I want to tell all the BorgWarner people thank you. I get to thank them in person in August.”