There have only been six NTT INDYCAR SERIES races on the Indianapolis Motor Speedway’s road course, but the 2.439-mile circuit has produced some of the most memorable moments in NTT INDYCAR SERIES history. Here’s a look a five of the best overtakes created by IMS’ unique road course layout.

‘Art of Racing in the Rain’

With a pair of long straightaways, the track provides two ideal passing zones - Turn 1, a 90-degree, right-hander at the end of the front stretch and Turn 6 a 90-degree, left-hander at the end of Hulman Boulevard in the infield. But last year’s rain race made nearly every corner a passing zone for Simon Pagenaud, who made IMS is own masterclass in racing in the rain.

.@SimonPagenaud made 14 on-track passes during the 2019 #IndyGP at @IMS, but nothing tops a pass for the win.

INDYCAR is back Saturday, July 4 on @NBC. #INDYCAR // #BestOfTheBest pic.twitter.com/jU4u3jpUnX 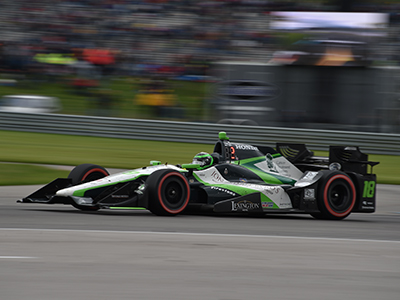 There’s no better time than a restart to use the half-mile-long main straight to pass a rival.

In 2016, Conor Daly used it, along with push-to-pass, to pass Helio Castroneves and take the lead. It was not only Daly’s first time leading laps in the NTT INDYCAR SERIES, but also his first at his hometown track – Indianapolis Motor Speedway. Needless to say, his family was excited.

No Attack, No Chance

Takuma Sato’s motto of ‘No Attack, No Chance’ was on full display in the 2017 race.

Fighting Mikhail Aleshin for a position, Sato made a daring pass along the pit wall as the Russian defended the inside line. It showed the full commitment the Japanese driver has when he’s behind the wheel.

A point he would prove later in the month in the Indy 500.

The front stretch at @IMS is the best place to pass at #INDYGP, but as @TakumaSatoRacer learned in 2017, you still need a #NoAttackNoChance mentality.#INDYCAR pic.twitter.com/2ZMTGMlfbF

With two tire compounds available to teams during road and street course races, strategy can vary. In 2018, with a pit stop to go, Robert Wickens was leading using the primary black tires while Team Penske’s Will Power was chasing using alternate red tires – which are designed to give more grip, but degrade quicker. In this battle, it was advtantage Power. He used the reds to run down Wickens and hold him off for his third win on the Indy road course. 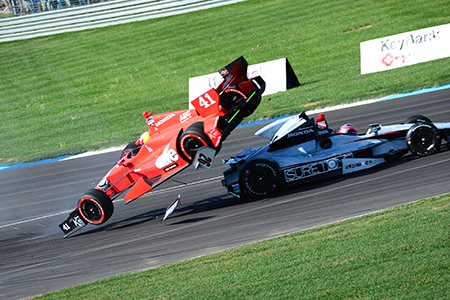 With the long run down Hulman Boulevard, drivers can use Turn 6 as a great place to pass, but sometimes when Turn 6 isn’t so giving. Martin Plowman learned that lesson in 2014 when he outbraked himself entering the left-hander, spun over the curbs and collected Franck Montagny just after the apex.