Nick Pultorak, a flat track motorcycle racer from Detroit, insisted his two sons not follow his career path. But bless his heart, Nick missed a step in his parenting process.

“He never mentioned his daughters not going into racing,” one of those daughters said.

Linda Conti was the youngest of Pultorak’s two daughters, and she was fascinated by watching the Indianapolis 500 on television. “The Perils of Penelope Pitstop” had been her favorite cartoon, and she could run faster than the boys her age. Inspired by athletes such as tennis great Billie Jean King, Linda wondered why a girl couldn’t “go racing.”

Linda was 13 and loving cars when her father offered a deal. He would buy a baby blue Volkswagen Type 3 Fastback for her to drive when she became of age if she would learn to replace its blown engine.

“Down in that basement we built that engine,” she said, proudly.

And with that, Linda was off and racing, a career worth celebrating in Women’s History Month.

Like many youngsters, Linda longed to be a race car driver, and she saved her money to attend the Bob Bondurant School of High Performance Driving at age 18. Among the instructors were future INDYCAR drivers Parker Johnstone and Dominic Dobson, who kindly pulled her aside to ask how much money her father had to invest in her pursuit. Not much, she said. Given that, they recommended a path other than driving if she wanted a career in motorsports.

“You don’t have the talent if your dad isn’t rich,” Linda remembers them saying. “Probably the best racing advice I ever got.” 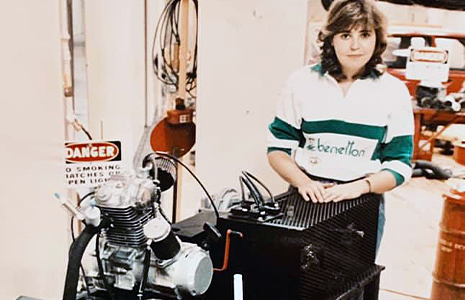 Building engines was one of the options Johnstone and Dobson suggested, and she knew the fundamentals of that. By the next racing season, she was at her local track – Waterford Hills Raceway, a 1.5-mile road course in Clarkston, Michigan – offering to help any team that would take on a driven 19-year-old woman eager to volunteer. One of the last teams she approached accepted, and that small team gave her a well-rounded experience.

The introduction of the Detroit Grand Prix as a Formula One race in 1982 opened Linda’s eyes to an even grander motorsports world, which led her to enrolling at Henry Ford College to study automotive engineering. That degree helped her become the first woman mechanic hired by the Skip Barber Pro Series, where she spent a year based at Lime Rock Park in Connecticut.

From work in Formula Super Vee to Atlantics, Linda kept rising in the sport. She pushed for INDYCAR opportunities, with her dream to work for Penske Racing, but the rejection letters were plentiful. One supportive response came from Steve Horne of Tasman Motorsports, another from Penske Racing.

Working for Bill Simpson’s Indianapolis-based safety equipment company as a helmet technician gave Linda the access to explore the INDYCAR, F1 and NASCAR paddocks, where she developed friendships with Jean Alesi, Mika Hakkinen and Johnny Herbert and worked with Team Lotus. The travels led her to meet many of her racing heroes.

“In one year, I met Ayrton Senna, Dale Earnhardt and Rick Mears,” she said. “I thought, ‘Boy, now I can die and go to heaven.’”

Linda’s adventures led her to work on the crew of AJ Foyt Racing, and she helped organize the INDYCAR SERIES debut of Greg Ray, whose teaming with engineer Thomas Knapp keyed an inspiring small-budget effort that earned a starting position in the 1997 Indianapolis 500. Two years later, Linda is believed to have become the first female team manager in “500” history on the team she co-owned with her husband, Dave. They fielded Robby McGehee in his rookie INDYCAR season, with the car finishing fifth at Indy and McGehee honored as the race’s top rookie.

Her journey would eventually lead her to Roger Penske, but it would take time, and for the sake of securing her future, she joined a Merrill Lynch office in Indianapolis in 1994 to begin what has become a 26-year career as a financial advisor.

Linda’s experience includes helping Lyn St. James with her driver development program, working as an INDYCAR broadcaster and being part of the underwriting process that took Penske Motorsports and Championship Auto Racing Teams public in the second half of the 1990s.

Over the years, Linda became a respected driver spotter, working not only with Ray, INDYCAR’s 1999 champion, and McGehee but also Robbie Buhl, Conor Daly and James Davison, among others. Much of that work was done sitting high above Turn 3 at Indianapolis Motor Speedway, where Mears has worked with Team Penske since retiring as a driver in 1992.

With Mears’ spotting days now over, Penske’s organization, which will help Paretta Autosport field a car for Simona De Silvestro in this year’s “500,” has recruited Linda to spot for the Swiss driver at the wheel of the No. 16 Dallara/Chevrolet.

“So, it comes full circle,” Linda said. “I wanted to work for Roger Penske 30 years ago, and now I get to work for Team Penske by way of Beth Paretta. I guess it shows perseverance.”

Indeed. Imagine, a 13-year-old girl building an engine in her basement, dreaming of having a place in her father’s sport, hoping one day to see INDYCAR, F1 and NASCAR from the inside. Linda has done that -- and continues to do that -- as the financial advisor of many of the sport’s stars through Acorn Advisors Group of Sanctuary Wealth, which she founded six years ago in Carmel, Indiana.

And if this doesn’t take the cake, the Conti’s have a 17-year-old son, Lucca, who wants to study aeronautical mechanical engineering in college and become an F1 engineer. Unlike his grandfather, his parents haven’t advised against it.