Editor’s Note: This is the first day of a four-day series of 2021 NTT INDYCAR SERIES team previews. Today’s rollout will feature AJ Foyt Racing at 10 a.m. (ET), Rahal Letterman Lanigan Racing at noon and Arrow McLaren SP at 2 p.m. Visit INDYCAR.com often today through Thursday to get the lowdown on every team and driver!

2020 Lookback: A victory in the Indianapolis 500 presented by Gainbridge always helps define a successful NTT INDYCAR SERIES season, and Sato did that in 2020, giving the team its second victory in the event since 2004. That Rahal finished third and the team qualified three cars in the top 12 adds to the impressive performance at Indianapolis Motor Speedway. Sato became the 20th multi-time “500” champion. For the season, Sato and Rahal combined for five top-three and 15 top-10 finishes. Among the highlights: Sato won a pole at World Wide Technology Raceway, and Rahal was poised to win the GMR Grand Prix at IMS until an untimely caution allowed Scott Dixon to close in and overtake him. Rahal, who finished second in that race, finished the year with five consecutive top-10 finishes to earn the sixth position in the standings. Sato was a career-best seventh. Spencer Pigot drove the team’s third car in the “500.”

What’s New for 2021: The organization returns largely intact, although Sato will have a new engineer as Eddie Jones has retired as a full-time race engineer. That position is now held by Matt Greasley, who spent the past seven years with Carlin Motorsport. Santino Ferrucci, who has finished seventh and fourth in his two Indy 500 starts, joins the team for “The Greatest Spectacle in Racing.”

Keep An Eye On This: Sato’s “500” victory made him one of only four drivers to have won an INDYCAR race in each of the past four seasons – Scott Dixon, Josef Newgarden and Will Power are the others – and Sato upped his career total to six race wins (same as Rahal).

Season Outlook: Rahal’s strong finish to the 2020 season gives the team a reason to be optimistic, and both drivers should be among the favorites to win the “500.” Adding the fast, fearless Ferrucci stacks the team’s Indy lineup even higher.

Defying Age: It took Sato until age 40 to win the “500,” but he is now one of only four drivers to have won the race twice beyond that birthday (Mauri Rose, Bobby Unser and Emerson Fittipaldi are the others). Another win would make Sato the 11th driver with at least three wins in the event and the first with three wins north of age 40. 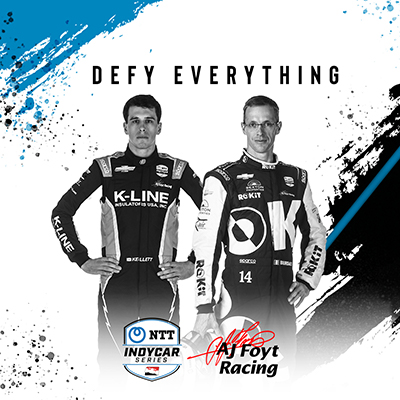 2020 Lookback: It can be argued that no NTT INDYCAR SERIES team was more impacted by the pandemic than this one. AJ Foyt Racing intended to use Bourdais, a four-time INDYCAR SERIES champion, in the opening four races to establish a baseline for the rest of the season, but the forced adjustments to the schedule wiped out that plan. While the team had several strong runs sprinkled through the season, it delivered its strongest performance at the season-ending race in St. Petersburg, Florida, when Bourdais finished fourth with Kimball eighth. Last year marked the last of three seasons with Tony Kanaan driving the No. 14 car. The Brazilian competed in the six oval races last year, finishing ninth in the first race at World Wide Technology Raceway and 10th at Texas Motor Speedway. Kimball drove in all 14 races in the No. 4 car, with St. Petersburg one of his two top-10 finishes. Kellett made his series debut in the No. 14 car in seven road course/street circuit races, and he earned his first “500” starting position, 24th on the grid.

What’s New for 2021: Continuity is the word for the upcoming season. Bourdais and Kellett are scheduled to compete in all of the races, with Kimball joining for the two Indianapolis Motor Speedway races in May and JR Hildebrand in the team’s fourth Indy 500 entry.

Keep An Eye On This: A race win by Bourdais would pull him within one of Al Unser for fifth place on the sport’s all-time list. Bourdais enters the season tied with Will Power for sixth place, each holding 37 race wins.

Season Outlook: With Bourdais aboard from the outset and showing well in preseason testing, there is much to be excited about, so much so that team president Larry Foyt is trying to manage expectations. The series is as competitive as it has ever been, with at least 18 participating drivers who have won INDYCAR SERIES races. Bourdais has won six races since 2014 with smaller teams, and his technical background and overall experience should prove beneficial to this team. Expect Bourdais to challenge for podium finishes, and race wins could be within reach. The St. Petersburg race on April 25 figures to provide one of the best opportunities. Bourdais won the event twice with Dale Coyne’s organization and finished fourth last year.

Defying the Path: Kellett is one of the few college graduates competing in a top level of motorsports. He not only is a graduate of Queen’s University in Ontario, but his degree is in Engineering Physics.