Editor’s Note: This is the third day of a four-day series of 2021 NTT INDYCAR SERIES team previews. Today’s rollout will feature Dale Coyne Racing at 10 a.m. (ET), Meyer Shank Racing at noon and Team Penske at 2 p.m. Visit INDYCAR.com often today through Thursday to get the lowdown on every team and driver! Click here for Monday’s previews and here for Tuesday’s previews. 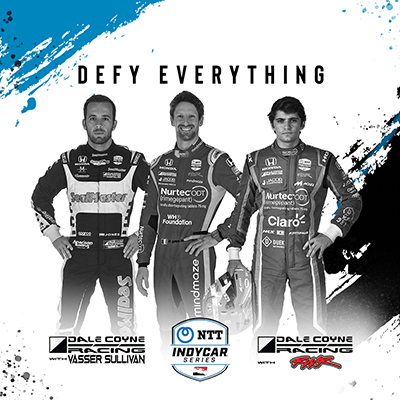 What’s New for 2021: Jones returns to the team with which he spent his rookie season in 2017. He finished third in the “500” and would have been named Rookie of the Year had it not been for Fernando Alonso’s strong, month-long performance. Jones also finished sixth at Long Beach and seventh at Road America that season before moving to Chip Ganassi Racing and Ed Carpenter Racing for one season each. Veteran Formula One driver Romain Grosjean will drive the team’s No. 51 car for the road courses and street circuits, and it should be an interesting watch. Pietro Fittipaldi will take Grosjean’s place on the ovals.

Keep An Eye On This: Grosjean might be new to INDYCAR, but he has competed at the elite level of global motorsports – Formula One – for nine seasons, with 179 Grand Prix starts and 10 podium finishes. While the differences between INDYCAR and F1 are many, Grosjean figures to adapt quickly, and don’t be surprised if he is contending sooner than expected.

Season Outlook: Expecting Grosjean to be a regular top-10 competitor might be asking a lot, but he figures to shine in some events. Jones could surprise by showing the talent exhibited in 2016 when he won the Indy Lights championship. Fittipaldi, the grandson of two-time “500” winner Emerson Fittipaldi, figures to draw significant interest at Indy. Rookie Cody Ware, son of team partner Rick Ware, tested for the team at the Open Test last week at IMS and seems almost a lock for a third entry in the “500.”

Defying Everything: Grosjean is best known for escaping a fiery F1 car in last November’s race in Bahrain. Even with burned hands, the veteran driver has shown well in preseason testing, and his excitement is clear for being in a competitive car in the NTT INDYCAR SERIES.