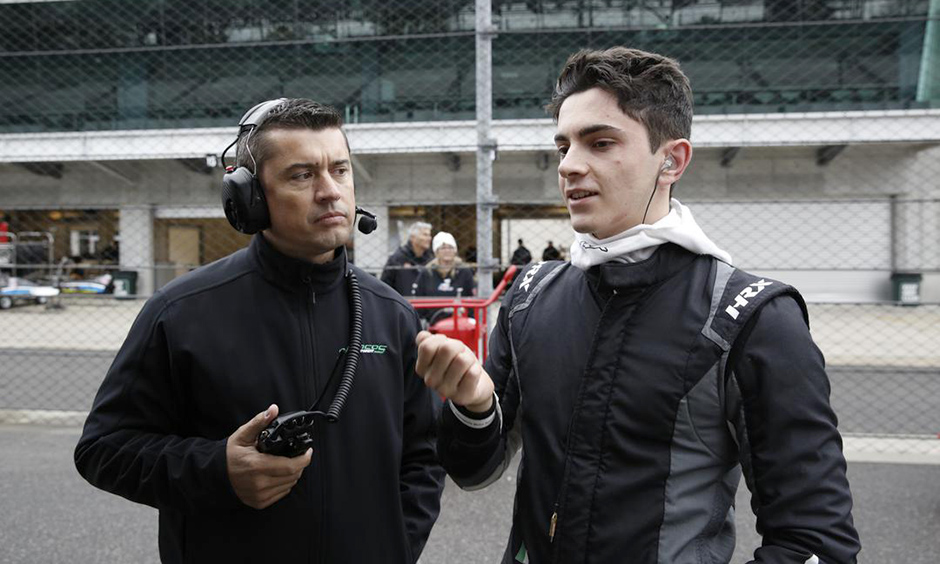 After a successful three years racing in Europe and Asia, up-and-coming Argentine driver Matteo Nannini was impressed with a recent Indy Lights presented by Cooper Tires test and is considering a move to America and a ride in Indy Lights for 2022.

Nannini, 18, made his first-ever trip to the United States Oct. 30-31 to take part in the Chris Griffis Memorial Open Test on the Indianapolis Motor Speedway road course. He drove an Indy Lights car prepared by Juncos Hollinger Racing and left several in attendance wanting more after the first session.

In damp conditions, driving a car he had never been in and on a racetrack upon which he had never competed, Nannini posted the second-fastest time of the opening session. He was the fastest driver until Jacob Abel dethroned him in the final minutes. After six sessions over two days, Nannini had the fourth-best time of the weekend in the No. 15.

Nannini said he enjoyed driving an Indy Lights car. The test piqued his interest in competing in the series full time in 2022, which he said he is considering this offseason. What he likes most about the series is the scholarship offered to the Indy Lights champion that helps them secure a ride in the NTT INDYCAR SERIES.

“It’s something I would consider to do,” Nannini said. “Especially because it’s a very great championship, because if you do well it gives you the opportunity to go up into INDYCAR, a main series I really like. I would keep it in mind to do it next year.”

He said he was surprised at the speed of the Indy Lights car, especially down IMS’ famed main straightaway that led clockwise toward road course Turn 1. Nannini said he was taking it easy with moisture on the track on Day 1, but he admitted that damp racetrack conditions are his favorite, still making for a fun session.

“Maybe the damp conditions are the worst, because it’s not wet and it’s not dry,” he said. “It’s when you maybe really feel the car, and that is the moment when you really feel the confidence in the car. You drive a bit sideways, and it’s quite fun as a driver. I didn’t want to take too many risks, but I was improving my pace, and it felt really good with the car. I didn’t expect to be that fast on the first run.”

Nannini comes from a racing family. His uncle is former Formula One veteran Alessandro Nannini, who competed in F1 for five years, scoring one win in 1989 at Suzuka. Matteo is forging his path toward a career as a professional race car driver.

A successful karting career launched him into single-seaters in 2019. He won the Formula 4 United Arab Emirates championship that year with seven wins and 16 podium finishes. In 2020, he moved to Formula 3, where he scored his first podium in Spain with a third-place finish.

Nannini landed a full-time F3 ride and part-time Formula 2 ride with HWA Racelab for 2021. In F3, Nannini has one win, at the Hungaroring in Budapest, as well as another podium in Spain.

It was this success overseas that helped tip off Juncos Hollinger Racing co-owner Ricardo Juncos to Nannini. But as a fellow Argentina native, Juncos said Nannini is an up-and-coming driver with a lot of hype behind him in their homeland.

So, Juncos elected to give him a test with his Indy Lights team after the season wrapped up to see if he could be a fit for his organization in 2022. He said even before Nannini got on track he was impressed with his strong will and desire to be a race car driver.

“He’s different,” Juncos said. “You can see he wants to be a race car driver. This kid seems to me that he has something inside of him that this is his life, and he’s willing to do whatever it takes to make it. That’s very unusual for me, in my opinion. I’ve seen a few drivers over the last 20 years like that, but not everybody is like that.

“You can see when you talk to him and the way he explains things. I see that right away. And when he’s in the car and he puts the helmet on and goes, you can see he’s a top driver. He’s very young, and on his side there’s a lot to learn, but he’s going to make it. It’s no question. He’s talented, and he has the desire to go to a higher level. That’s some talent you have or you don’t. It’s an attribute that top drivers have.”

Juncos said Nannini’s immediate speed on the 2.58-mile version of the IMS road course that featured the inner loop instead of the Turns 5-6 chicane “was a surprise.” He said they held education sessions with Nannini before he got on track to prep him for a different tire, car and racetrack than he is accustomed.

He added that Nannini’s performance was a welcome sight for the Juncos Hollinger team, which had a down year in Indy Lights by its standards, not placing a driver in the top three in the championship standings. Juncos was satisfied that Nannini proved his cars can still compete with powerhouse Indy Lights teams such as Andretti Autosport and HMD Motorsports.

Whether Nannini’s October success translates to a full-time Indy Lights ride remains to be seen, but Juncos said he would like to get in on what he predicts will be a long career for Nannini while it’s still in its infancy.

“Of course, I would love to have him with us,” Juncos said. “I think it was a good step forward after the test. He showed the potential. I think he’s really happy with the team. We tried to show this kid who we are, how we work and that’s it. I think we gave them a good impression, and I think the intentions are there. We’ll see. Hopefully he can be with us.”