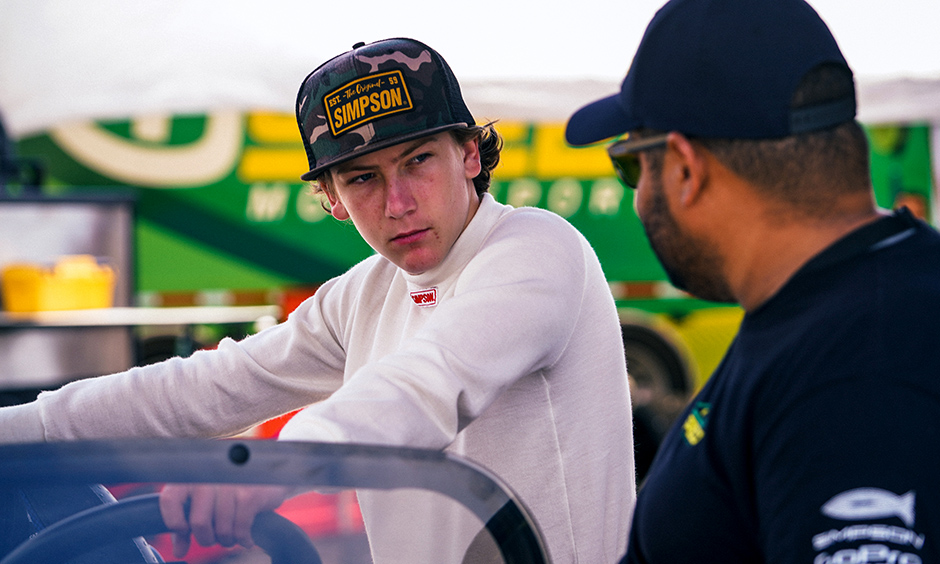 Riding the high of a successful 2021 racing season, Kyffin Simpson is looking to carry that momentum toward the NTT INDYCAR SERIES with a full-time ride for the 2022 Indy Lights presented by Cooper Tires season, striving for wins and even a championship out of the gate.

Simpson, 17, is racing in his rookie Indy Lights campaign for a new Lights team, TJ Speed Motorsports, owned by longtime open-wheel racing engineer Tim Neff, who also was a partner in the Indy Lights team fielded by Sam Schmidt Motorsports.

While Simpson is entering a series new to him, he said it’s been a fun challenge that he’s adapting to well. Specifically, he’s spent multiple Indy Lights tests learning how to drive with more downforce in the car.

Simpson’s smooth transition was reflected well on the speed charts at the Chris Griffis Memorial Open Test last month on the Indianapolis Motor Speedway road course. He posted the second-quickest time of the weekend, just two-hundredths of a second off Benjamin Pedersen’s top lap.

Simpson also completed the most laps over the weekend’s six Indy Lights sessions with 116 laps.

While Simpson and TJ Speed Motorsports are new to Indy Lights, they certainly aren’t strangers to each other. The organization has been Simpson’s home for the last year as the duo blazed a path through Formula Regional Americas Championship powered by Honda.

“It was just a natural progression for him (to join TJ Speed Motorsports in Indy Lights),” Neff said. “Kyffin has just been spectacular this year. It’s easy to forget how young he is.”

It was an impressive performance from a driver who just finished his second season in single-seaters. Simpson, who turned 17 in October, spent his younger years rising the ranks in karting throughout the Caribbean and beyond. Simpson was born in Barbados and grew up in the Cayman Islands, a British Overseas Territory just south of Cuba in the western Caribbean Sea.

Simpson said he’s been a fan of the NTT INDYCAR SERIES for several years, with two-time champion Josef Newgarden being one of this favorite drivers. As a fan, he has enjoyed the competitive nature of North America’s premier open-wheel series and knew it was where he wanted to race.

As his karting career ended, Simpson started looking at paths that would land him in the NTT INDYCAR SERIES. His path took him to multiple regional formula series around the United States and then Indy Pro 2000 presented by Cooper Tires on the Road to Indy ladder system.

When Simpson wasn’t blazing a path through FR Americas this year, he was competing in a part-time Indy Pro 2000 season for Juncos Racing. He ran 16 races and scored three podium finishes, at the IMS road course, Road America and Mid-Ohio.

He said with the end of the season approaching, it was time to decide what path would get him to the NTT INDYCAR SERIES the fastest, and he said he knew Indy Lights was the direction he needed to go to accomplish his goals.

“I’ve been watching INDYCAR for the last couple years, and I’ve really enjoyed watching how great the racecraft is there and how you can race so close to each other, whereas like in F1, you can’t really race as close and things like that,” he said. “I really love racing, so going to INDYCAR was what I wanted to do, and this seems like the best way to do it.”

Simpson doesn’t see his or TJ Speed Motorsports’ rookie stripes as a detriment. He’s confident he can be a force in the 2022 Indy Lights championship race.

“My goal is always to win the championship and win as many races as possible,” Simpson said. “I’m just looking to have a lot of fun and maybe even get into INDYCAR sometime soon.”

Neff also exudes Simpson’s confidence, but the Australian team owner pairs his sense of optimism with a sense of reality in what is expected to be a strong Indy Lights season in 2022.

“I think it’s going to be pretty competitive,” Neff said. “I think if we can finish in the top five with Kyffin, I’d be pretty happy with that. We’re putting in every effort to win the championship, but I’m also realistic. Kyffin is young, and next year is really only his third year driving cars. We’ll just see. No pressure.”