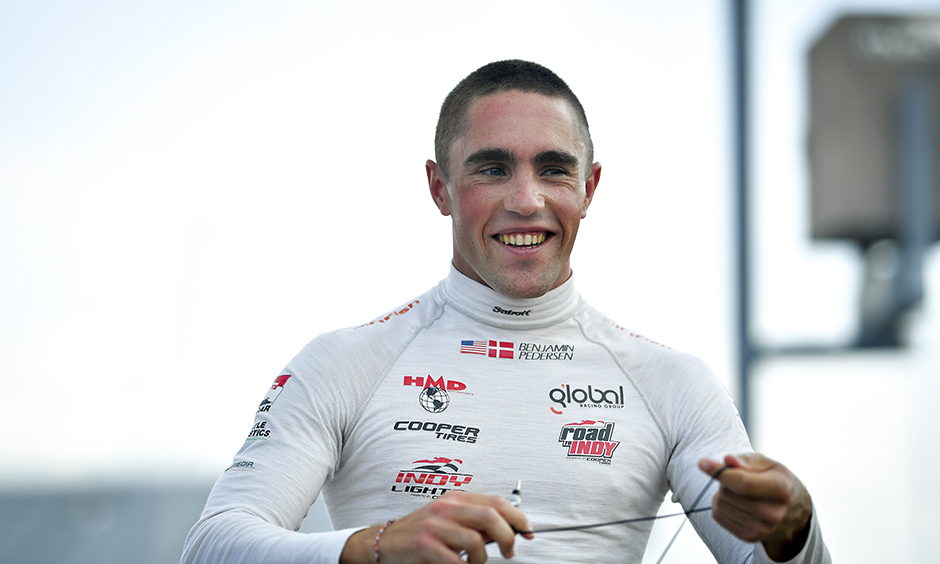 Benjamin Pedersen doesn’t want to hear any talk of a championship heading into the 2022 Indy Lights Presented by Cooper Tires season.

Pedersen is one of the strongest returning drivers from the 2021 season. He finished fourth in the championship standings with six podiums and a best finish of second coming twice, at Barber-1 and Road America-1.

With that, talk in the Indy Lights paddock has placed Pedersen among the early favorites for the 2022 Indy Lights championship. But the Danish-American driver is trying to look beyond the pressure and focus on himself and his race team.

“People have been saying in the paddock we can go for a championship next year, and really, I try to push that aside and just focus on getting better,” he said. “All my focus for this year is trying to win races and be on the podium consistently.

“To be honest, when people say that I’m just like, ‘Yeah,’ but I disregard it, because my focus is just to constantly improve myself, and then everything else will be determined based off that. I think you got to really channel your focus.”

Given the impressive performance during his rookie Indy Lights season, it’s no surprise all eyes are on Pedersen. While he doesn’t want the added attention of a championship contender just yet, Pedersen said his goal is to win the title in 2022.

He isn’t taking the additional pressure in a negative way. Pedersen said it’s nice to hear the compliments and for people to believe that he’s a championship-caliber driver.

“I just channel that positive energy into extreme focus to try to get the most out of myself, and that’s as far as I take it, really,” he said. “I don’t take it much further than that. Every session I take one at a time, every race weekend I take one at a time. For one, to enjoy it, and two you got to work your butt off the whole year. You just got to keep it simple, that’s my big thing.”

Pedersen, who was born in Copenhagen, Denmark, has been driving single-seaters since 2016, when he raced in Formula 4 United States Championship. His strongest season was the 2019 F3 Americas Championship. He won seven races and finished second in the standings.

While that helped prepare him for his first year in the Road to Indy, Pedersen admits he and his team didn’t start the 2021 season in championship form.

Pederson came out of the gate strong at Barber Motorsports Park with a second-place finish, but it took until the halfway point in the season for him to score another podium finish, a second at Road America, with the Global Racing Group with HMD Motorsports team.

After Road America, Pedersen flipped a switch, scoring four podiums and seven top-five finishes in the final 10 races. He attributes the uptick in performance to a growing comfort level with the Indy Lights car and his team.

The speed and results over the final 10 races have proven Pedersen, 22, can catapult from fourth to first in the championship next season. He also verified his title credentials during testing in late October.

During the Chris Griffis Memorial Open Test in late October, Pedersen topped the charts after six Indy Lights sessions over the weekend on the 2.58-mile IMS road course. His best lap time of the weekend in the No. 24 came in the third session of the weekend.

“This year, I’ve experienced it,” he said. “I understand the car a lot more. I’m just trying to start next year the way we finished last year from a driving perspective. We’ll take it one race at a time and just try to get the most out of myself. Really, I can’t do much more than that.”