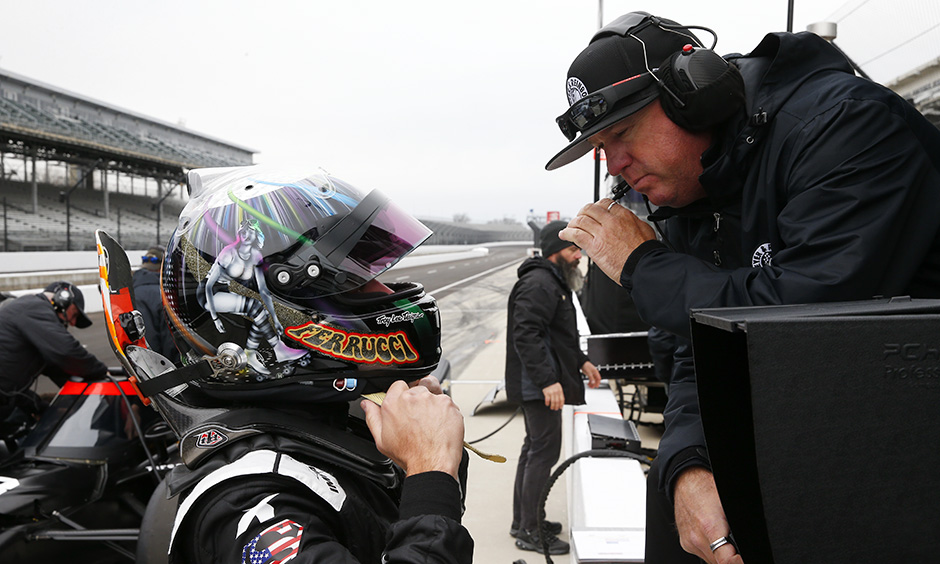 Meyer Shank Racing, which added Simon Pagenaud to reigning champion Helio Castroneves, is one. The other?

Not Team Penske, Chip Ganassi Racing, Arrow McLaren SP, Andretti Autosport or any other team that regularly competes in the NTT INDYCAR SERIES.

Dennis Reinbold’s Indianapolis-based, one-off team rolled into its first series event since last May with its 12 full-time employees, an assortment of veteran crew members added for this week’s Open Test and the upcoming “500,” and two cars that looked ready to roll.

D&RR is Ferrucci’s third different team in the past years at IMS, but he said it is every bit the part of a team capable of winning the 106th Running on Sunday, May 29.

“You know, they’re full time in other series, so the group of guys is really good, really calm and collected,” Ferrucci said Wednesday at IMS. “I think with this being the first day (of testing), it’s the most collected I can remember people and a team being here.

“This place is nerve-wracking, and this is a brand-new car, fired up for the first time last night. Knock on wood, as soon as we got going it was really good. No complaints.”

Ferrucci ended up fourth fastest overall Wednesday with a top lap of 226.182 mph in the No. 23 Dreyer & Reinbold Chevrolet.

In addition to last year’s result, Ferrucci brings finishes of seventh and fourth in the “500,” and he finished ninth in this season’s XPEL 375 at Texas Motor Speedway after replacing Jack Harvey (concussion) with no practice time. He earned the Indy 500’s Rookie of the Year Award in 2019.

Ferrucci’s strategy here is being called by 2004 Indy 500 winner Buddy Rice, whose history with him dates to karting together years ago on the East Coast.

“It’s funny how the worlds align,” Ferrucci said. “Same thing with Sage. I’ve known Sage since the karting world when I was 5 years old. Here we are as teammates.”

Like Ferrucci, Karam had a strong rookie year at Indy – in 2014 when he finished ninth with this team – and his career includes an Indy Lights championship the year prior. Karam is back in the No. 24 car, with a top speed of 220.116 during his refresher test.

“This is his (seventh) year with us, so we know him really well,” Reinbold said of Karam. “I really like what we’ve got here with these two, and many of our (crew members) have been with us a long time, so we’ve got experience. We’re ready for this.”

Jimmie Johnson not only reported no issues with the right hand he broke 12 days ago in practice for the Acura Grand Prix of Long Beach, he reported no pain, either.

Last week Johnson had outpatient surgery to insert a screw in the broken bone.

“I’m so thankful I put that screw in,” he said. “It’s provided so much stability to the bone that the pain is just gone, and it was such a short time between the injury and the screw being put in that I didn’t have any soft tissue atrophy. I have great flexibility and range of motion, and I’m really just wearing the splint to prevent further injury if that accident happens again.

“I’ve never had hardware put in (somewhere) and had it stick around and stay, but modern science is pretty impressive.”

Johnson also said he felt the benefit of having competed in his first INDYCAR SERIES oval race, at Texas Motor Speedway on March 20 when he finished sixth.

“It helped me in so many ways,” the driver of Chip Ganassi Racing’s No. 48 Carvana Honda said. “It’s amazing how little of a lift (off the throttle) can impact your lap in miles per hour. It’s understanding those nuances of just lifting a little because of traffic but not making it a big lift. What is a small lift versus a large lift? It’s (experiencing) the G loads. (It’s) knowing how long it takes the tires to come in.

“I had a full race weekend to experience all of that at Texas, so straight away here I felt more comfortable on the first lap.”

Alexander Rossi’s future has been the subject of much speculation in recent days, with an Associated Press story suggesting the 2016 Indianapolis 500 winner has signed a new deal with Arrow McLaren SP.

Rossi told NBC Sports’ Peacock Premium broadcast that he has not signed with any team for next year but is considering all options as his contract with Andretti Autosport approaches expiration at season’s end.

“There’s a lot of joy that I have driving here (at Andretti), but also at the same time I’m approaching a critical point in my career, (having turned) 30 at the end of last year,” Rossi said. “There’s only so much runway that you have as a racing driver, so this next decision is very important and one that I’m weighing very carefully.

“But nothing has been decided (about 2023). People want to report things have been decided, but that’s just the nature of news and motorsports. Certainly, we’re looking at options and what we’re doing – whether we’re staying or going – and I think Michael (Andretti) is in the same boat.

“We’re trying to make as much of a good run that we can at this point for kind of the first half of the year not only to build my own stock value but the team’s, as well. Michael needs his cars to be going up front. Everyone is benefitting where there is success, and that’s the focus right now.”

Rossi has been driving Andretti Autosport’s No. 27 NAPA AUTO PARTS/AutoNation Honda since 2016, and he signed his current contract in 2019. He has led in five of his six “500” starts, with four top-10 finishes.

Like Rossi, Pato O’Ward and his future have been the subject of much speculation in recent weeks, and the driver of the No. 5 Arrow McLaren SP Chevrolet admitted Wednesday the chatter was bothersome in the early part of this year.

But he seemed significantly more at peace when speaking to reporters Wednesday at IMS.

“It gets to the point where it’s just noise,” he said. “I think I’m in a great space now with the team, and man, I want to go out there and win for them. I know everything will get sorted out.”

O’Ward has finished sixth and fourth in his two Indy 500 starts.

‘Sound the Alarm’ Set for Saturday

The effort is part of a national Red Cross “Sound the Alarm” initiative to install 50,000 free smoke alarms in more than 50 at-risk communities across the country in May.

This work is made possible thanks to generous financial donations from regional partners, including Allied Solutions, Anthem Foundation, Eskenazi Health, the United Way of Central Indiana, IMS, INDYCAR and the United Way of Northwest Indiana.