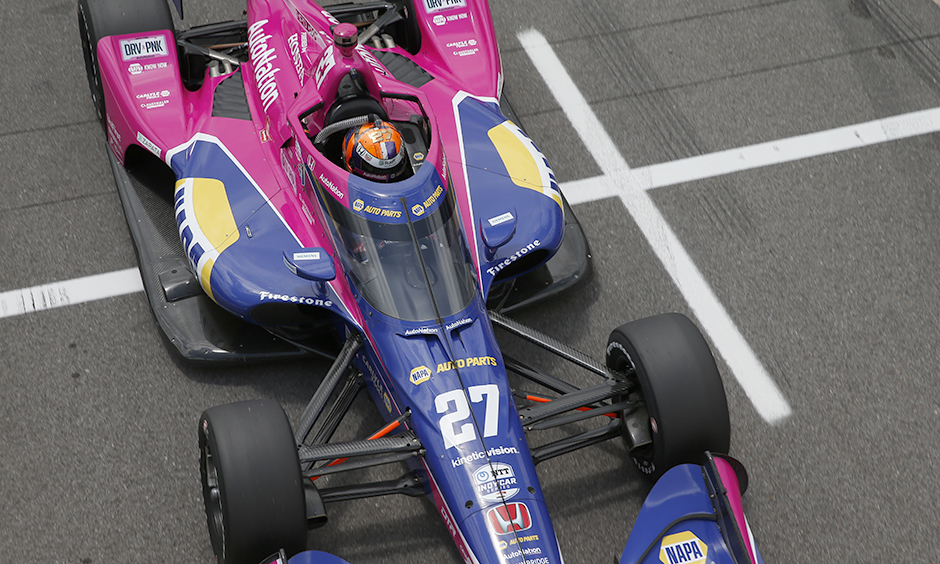 Andretti Autosport brought three front-running hot rods to the Honda Indy Grand Prix of Alabama presented by AmFirst, and one of them crashed hard in the pre-qualifying practice. The damaged car of Alexander Rossi (No. 27 NAPA AUTO PARTS/AutoNation Honda) seemed uncertain to participate in the qualifying session.

So which driver advanced to the Firestone Fast Six? Yep, the car that needed nearly three hours for repairs, completed just minutes prior to qualifying.

Rossi’s car had the engine, gearbox and rear suspension pieces repaired or replaced in impressive fashion by crew members from all four of Michael Andretti’s teams, with help from employees of Honda Performance Development, which powers the organization.

Rossi was strapped into the car while still on the team’s setup pad, and the car was rolled out to pit road as final preparations for qualifying were made. Rossi did the rest, earning a spot in the Firestone Fast Six. He will start fifth in pursuit of his first series victory since the 2019 race at Road America.

“It was unbelievable,” Rossi said of the quick repairs. “It was a big situation to (replace) an engine and a gearbox. I put (the crews) in a very difficult situation. It was amazing just to be out there in the first place and to have the opportunity to compete and qualify.

“Obviously, we knew the car had been strong all weekend. We didn’t get a chance on the (Firestone alternate) red tires, so the first run was kind of guessing a little bit.”

Rossi said members of the organization were “relieved and happy” to have gotten through the adventure. Why? Because starting on the back row of a 26-car field on a tricky track with limited passing opportunities would have effectively ruined the 27 car’s weekend.

“If we had not made qualifying,” Rossi said, “you’re super screwed. This gives us a really good shot to have a good day tomorrow.”

Rossi figures to have teammates charging behind him. Romain Grosjean (No. 28 Enevate DHL Honda) and Colton Herta (No. 26 Gainbridge Honda) expected to be Fast Six qualifiers, but their second rounds were spoiled by a late-session stoppage for the slide-off of Chip Ganassi Racing’s Marcus Ericsson (No. 8 Huski Chocolate Honda).

After being the fastest car in Friday’s practice, Herta’s team had waited until the rest of the cars completed a lap, and they didn’t have enough time to get a prime lap completed.

“It’s the reason we got the pole at Long Beach because we did a lap less than everybody, so we had a lap less on the tires,” Herta said. “It does seem like a lot, but you can feel a difference in tire (degradation). It does make a big difference.”

Given that no Barber winner has started further back than ninth, Herta has his work cut out for him Sunday.

“Tenth isn’t terrible; you can win from there,” he said. “Who knows what the weather is going to bring tomorrow, so we’ll see.”

Rookie Devlin DeFrancesco (No. 29 PowerTap Honda) is the team’s fourth driver. He will start 20th.

Grosjean obviously had heard the chatter about Barber being the ideal track for him to score his first NTT INDYCAR SERIES victory – the natural terrain road course is similar to what he experienced in Europe – but he rebuffed that theory when NBC’s Marty Snider asked him about it following Saturday’s practice.

“We were super-fast in Long Beach,” Grosjean said of the street circuit where he finished second in the Acura Grand Prix of Long Beach on April 10. “I know (Barber) looks more European than anything else, but I’ve been driving for 20 years, so I know the tracks.

“I understand the idea behind it, but I feel ready to win anywhere.”

The 10-year Formula One veteran has an NTT P1 Award and four top-three finishes in his 16 races in this series.

The Englishman will start 11th in Sunday’s 90-lap race, and he thought he could have been even higher. He, like others, was on his fastest lap when Ericsson spun off the course.

“The (lap) before was an all-right one – I kind of just messed it up down where Marcus lost it,” he said. “Maybe it was slippery there.

“But yeah, it’s annoying because I was on for a nice one. It’s a great result for the team … the car is great this weekend. We found a bit (of speed). But it would have been nice to give them a bit more. Sixth, seventh was on the table.

“It’s an element of progress. I’m an optimistic guy – sometimes pessimistic – but this is a good weekend so far.”

Ilott showed his qualifying pace was no fluke, as he led the final 30-minute practice this afternoon with a top lap of 1 minute, 7.0906 seconds.

The past wasn’t a predictor of the present in Saturday’s qualifying session. Three drivers with exceptional Barber resumes failed to get out of Round 1.

Will Power (No. 12 Verizon Team Penske Chevrolet) had an average starting position of 2.9 with four poles and eight front-row berths, but he will start a career-low 19th Sunday.

Scott Dixon (No. 9 PNC Bank Chip Ganassi Racing Honda) had reached the Firestone Fast Six in all 11 events held at this track, and he entered this weekend with an average starting position of 4.2. He will start 13th.

Helio Castroneves (No. 06 AutoNation/SiriusXM Honda of Meyer Shank Racing) hasn’t raced at Barber since 2017, and his average starting position has been 3.75. He will start 16th.