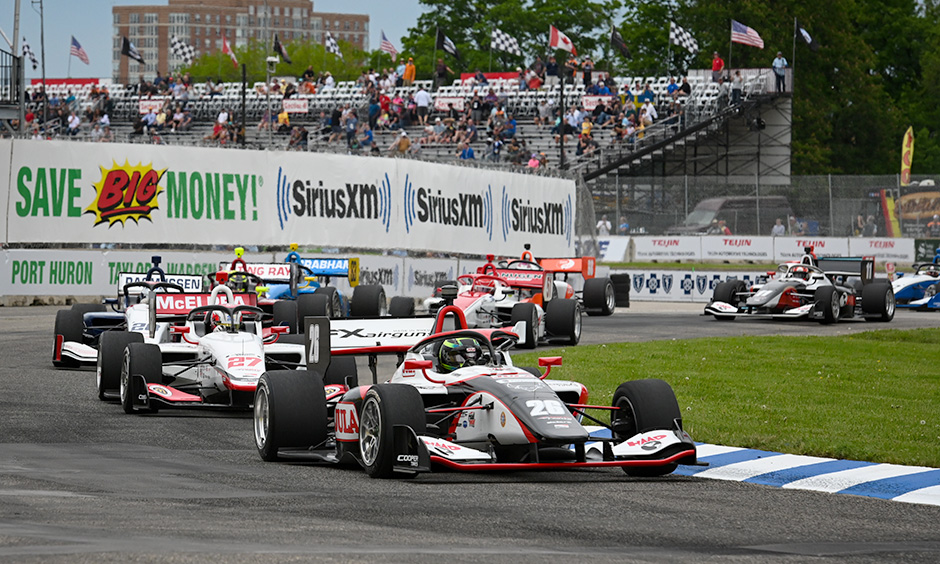 Lundqvist led all 30 laps of the Indy Lights Presented by Cooper Tires event at the Raceway at Belle Isle Park from the pole in the No. 26 HMD Motorsports with Dale Coyne Racing car. He won both Indy Lights races this weekend in Detroit and has won three consecutive races this season.

Swedish driver Lundqvist also led all 25 laps in Saturday’s race from the pole, and Sunday’s win marks his fourth Indy Lights victory in six races this season, already surpassing his entire win total of three from 2021. He leads the championship standings by 84 points – more than a race worth of points – over teammate Benjamin Pedersen.

The weekend was pure perfection for Lundqvist. Besides winning twice from the pole and leading every lap, he also turned the fastest lap in both races.

“What a couple of races we’ve done,” Lundqvist said. “I’m super happy and proud of this team. I think we showed up here. In Practice 1, I wasn’t feeling it, but we just built up to it. We got a good car, and it got the most out of myself.”

Lundqvist, 23, couldn’t be stopped Sunday in Detroit, often stretching his lead to more than five seconds before two cautions on the day bunched the field back on his gear box.

The first yellow came on Lap 9 when Lundqvist’s teammate Christian Bogle wiggled in Turn 13 and corrected his No. 7 HMD Motorsports with Dale Coyne Racing car hard into the outside wall. Bogle was unhurt and credited with 14th.

Heartbreak and frustration continued to follow Andretti Autosport rookie Christian Rasmussen this season. While running third on Lap 19, 2021 Indy Pro 2000 champion Rasmussen carried too much speed entering Turn 5. Unable to slow the car to make the corner, he made hard contact with the outside wall in the No. 28 Road to Indy/Stellrecht machine for the second caution of the day.

Even the threat of rain on the island between the Detroit and Windsor, Ontario, skylines couldn’t stop Lundqvist. Light moisture arrived on Lap 16, potentially throwing a curveball in the race. But given Lundqvist has won the last three Indy Lights races that featured rain, it continued to be smooth sailing for the Swedish driver as moisture never played a major factor.

The dominating performance cemented Lundqvist’s status as the favorite to win the Indy Lights championship and secure the NTT INDYCAR SERIES scholarship for winning the title.

Lundqvist has won all but two races this season and is boasting an average finish of second after six races. His worst finish is fifth, in Race 1 of the IMS road course doubleheader.

Lundqvist is putting up numbers better through the first six races than 2021 Indy Lights champion Kyle Kirkwood did last season when the now NTT INDYCAR SERIES rookie had one win and an average finish of 4.1 before scoring a record-tying 10 wins and the series title.

“It’s fairly early still, and we still haven’t reached halfway in the championship,” he said. “It’s all a bit early to think about that. We’re here to win races. That’s what we enjoy, and that’s also the best way to win a championship.”

Indy Lights is back in action next weekend, Sunday, June 12, at Road America alongside the NTT INDYCAR SERIES. Live coverage of the seventh Indy Lights race of 2022 begins at 10:35 a.m. (ET) on Peacock Premium and the INDYCAR Radio Network.