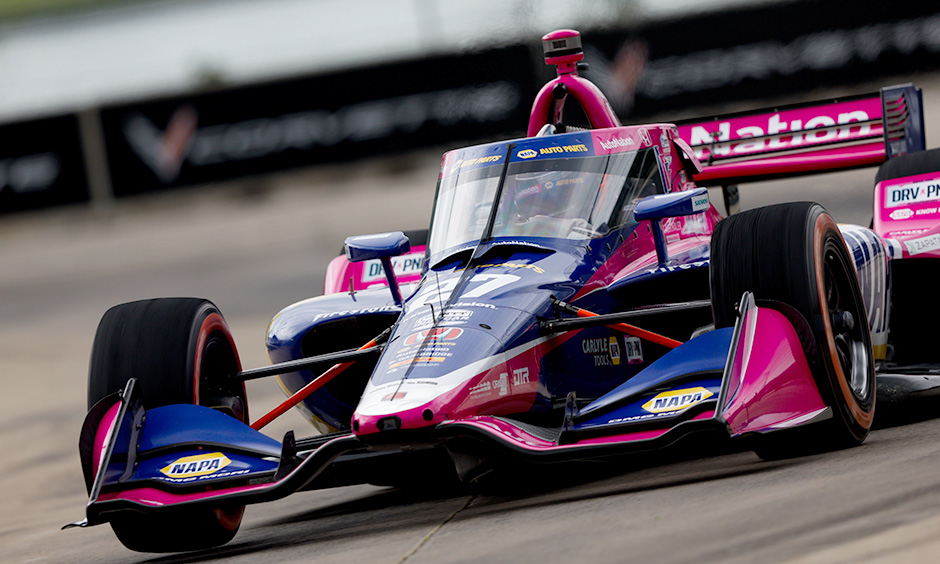 Oh, what could have been for Alexander Rossi.

Had the Chevrolet Detroit Grand Prix presented by Lear been 71 laps instead of 70, Rossi thinks he could have snapped his nearly three-year winless drought in the NTT INDYCAR SERIES and jumped in the iconic James Scott Memorial Fountain.

Rossi drove the No. 27 NAPA AUTO PARTS/AutoNation Honda to a second-place finish at the Raceway at Belle Isle Park, just 1.0027 seconds behind race winner Will Power in the No. 12 Verizon Team Penske Chevrolet at the line. The race officially ended under caution because Rinus VeeKay crashed just as the leaders saw the checkered flag.

What hurts the most for Rossi is just how close he came to passing Power on a differing tire strategy. He was on the more durable Firestone primary (black) tires at the end, while Power was on the quick-wearing Firestone alternate (red) tires.

With Power’s tires on their last leg, Rossi cut the lead from 8.2928 seconds with five laps to go to just over a second by the time they crossed the finish line on the 14-turn, 2.35-mile street circuit at the Raceway at Belle Isle Park.

“I think one more lap, and it would have been really interesting,” Rossi said. “You got to give credit to the No. 12 guys and Will. That’s hard to do at the end, to hang on (with old tires).

“The No. 27 NAPA AUTO PARTS / AutoNation Honda was amazing. Yet again, we come here with an amazing car and can’t quite get the win. But it’s a good recovery from yesterday, and the strategy was good.”

Rossi rallied from the 11th starting position after an incident in qualifying ended Round 2 early and prevented him from advancing to the final round to compete for the NTT P1 Award for pole.

From the green flag, Rossi and his Andretti Autosport team knew they needed to choose an opposite strategy from the leaders if they wanted to advance their running position. So, Rossi started the race on the Firestone alternate tires, knowing they would wear very quickly and he could get his mandatory running of the “reds” out of the way.

Looking to shed the tires quickly and race at maximum pace, Rossi pitted on Lap 4 of the 70-lap race for Firestone primary tires. From there, he led those in the NTT INDYCAR SERIES field on a three-stop strategy.

Meanwhile, Power, looking for his third Chevrolet Detroit Grand Prix win, led the field on the two-stop strategy and saved his Firestone alternate tires for the end.

By Lap 53, both drivers had made their final pit stops of the day, and it was an all-out duel to the finish to win the final NTT INDYCAR SERIES race on Belle Isle, as the race will move to Detroit’s downtown streets in 2023.

Rossi was nearly 15 seconds behind Power on Lap 53 and drove what he said were “qualifying laps,” pushing his pink-and-blue car as hard as he could every lap to try to catch Power.

“It was hard at the end,” Rossi said. “It’s good to get the car where it should have been and have a shot there at the end. We did our best to kind of manage that pace and go for it at the end, but we were probably a lap short. Still, all-in-all, a good result for the team.”

The strong run Sunday came just three days after Rossi announced he would leave Andretti Autosport, the only team he’s competed for in the NTT INDYCAR SERIES, for Arrow McLaren SP in 2023.

Rossi said having the announcement out in the open or the effects of leaving a team you’re driving for played no factor in his mentality or performance, which marked his 26th career podium. The California native said his main focus is 2022 and producing results now.

And now, Rossi is having one of his best performances in nearly two years. After finishing fifth in last weekend’s Indianapolis 500 presented by Gainbridge, Rossi scored back-to-back top-five finishes for the first time since October 2020, when he finished second and third in the Harvest GP doubleheader on the Indianapolis Motor Speedway road course.

What’s more, Rossi has finished in the top 10 in four of seven races this season and sits seventh in the championship. He had nine top-10 finishes all last year, and Sunday marked his best finish since he was second in the Grand Prix of Portland last September.

Still, it isn’t Victory Lane, and Rossi would love nothing more than to end his now 44-race winless drought. The last time Rossi scored an NTT INDYCAR SERIES win was June 23, 2019, at Road America.

And where is the series heading next weekend? Road America.

“I think the No. 27 car, in particular, has some good momentum going into one of our best tracks, frankly, at Road America,” Rossi said. “We feel good about the position we’re in. It’d be fitting to come full circle with a win next week, so we’ll try for that.

Rossi and the rest of the NTT INDYCAR SERIES field will head to scenic Road America in Elkhart Lake, Wisconsin, on Sunday, June 12, for the Sonsio Grand Prix presented by AMR. Coverage begins at 12:30 p.m. (ET), live on NBC, Peacock Premium and the INDYCAR Radio Network.