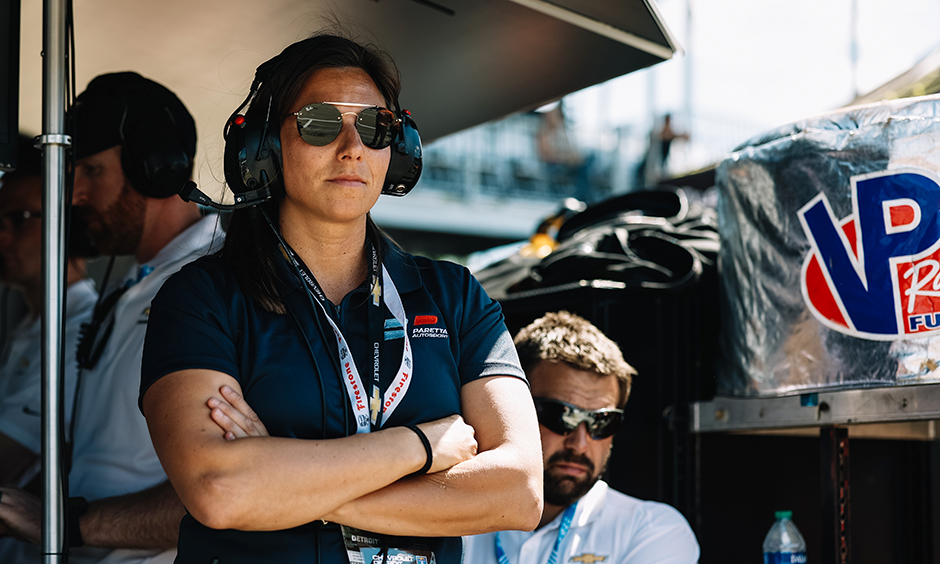 The veteran of 69 series races noted that it has been seven weeks since Paretta Autosport announced it would field her in three races this season, beginning with Sunday’s Sonsio Grand Prix of Road America presented by AMR. She had to wait through four series races, including last weekend’s Chevrolet Detroit Grand Prix presented by Lear, where she sat on the pit box of Ed Carpenter Racing to see how the team she will work with operates during a race weekend.

In one sense, the lead time has allowed De Silvestro to prepare her body for the physical challenges of driving a race car without power steering around a 14-turn, 4.048-mile permanent road course. But in another sense, she has had to manage the mental side of the preparation.

“There was a lot of time to think about it,” she said. “Maybe overthink it.”

But it’s real now. De Silvestro has been in the simulator this week and will travel Thursday to Elkhart Lake, Wisconsin. The first practice of the weekend is at 4:25 p.m. (ET) Friday.

“I’m just really glad to be in the week of the race now, kind of just getting down to work and get going,” she said. “I’ve been waiting for this for a while now, especially on the road course. So, yeah, (I’m) pretty excited about it.”

De Silvestro is a familiar name to many NTT INDYCAR SERIES fans. She is a driver who came on the scene in 2010 with HVM Racing, led four laps in her series debut and won Rookie of the Year for the Indianapolis 500 after finishing 14th. In the opening race of her second season, she finished fourth in St. Petersburg and was tied with Scott Dixon in the standings after two races.

People forget that when Tony Kanaan won the “500” in 2013, De Silvestro was his teammate at KV Racing Technology, and she finished only two positions behind him in the standings. She finished 14th in points, one spot behind Sebastien Bourdais and one spot ahead of Josef Newgarden. But that was effectively the end of her road in the series.

De Silvestro was left without a ride for 2014 and managed three starts with Andretti Autosport in 2015. Since then, she has only last year’s effort in the “500” with Paretta Autosport on her resume.

Beth Paretta has given De Silvestro a way back into the series. They will race the No. 16 Paretta Autosport Chevrolet this weekend with support from Ed Carpenter’s team, and then they will turn their focus toward competing in the Honda Indy 200 on July 3 at the Mid-Ohio Sports Car Course and the Big Machine Music City Grand Prix on Aug. 7 in Nashville.

De Silvestro, 33, is grateful for the opportunity as they can be difficult to get.

De Silvestro will be one of two women among Sunday’s 27-car field. The other is Tatiana Calderon, who is driving the No. 14 ROKiT/AJ Foyt Racing Chevrolet on the road and street races this season.

Since being a full-time NTT INDYCAR SERIES driver, De Silvestro has driven race cars all over the world and been active since her last full season in this series. She has competed in Formula E and Australian V8 Supercars and has been a Porsche factory GT driver, and she knows she faces a hearty challenge this weekend. The last time she raced at Road America was in 2009, and that was in Atlantics. She hasn’t been on a road course in this series since 2015 – and certainly not with an aeroscreen -- and she knows the current field of drivers and teams is as deep and as competitive as she faced the last time around.

Also, this will be a two-hour race. De Silvestro said her longest race since last year’s “500” was a sports car race spanning 45 minutes. That’s why she has been training specifically for the challenge that awaits.

“You want to do the best job you can,” she said. “I think we have to be realistic, as well. We have not tested (this year as a team). It’s the middle of the season, (and) all these guys and girls have been running half the season already. We need to see where we kind of stack up.

“We just need to do our job correctly and just kind of, yeah, keep chipping away at it, finishing the (55-lap) race. I think if we do everything correctly, I think the race could be all right.”

She said she feels “like a little kid again getting to drive an Indy car.”

“Hopefully I haven’t forgotten how to drive,” she said, laughing. “So, I think we’ll be OK.”

The eighth of 17 races on the NTT INDYCAR SERIES schedule will air live at 12:30 p.m. (ET) Sunday on NBC and Peacock Premium. The INDYCAR Radio Network will begin coverage at noon. Listen live on the INDYCAR Mobile App, racecontrol.indycar.com and SiriusXM Channel 160.