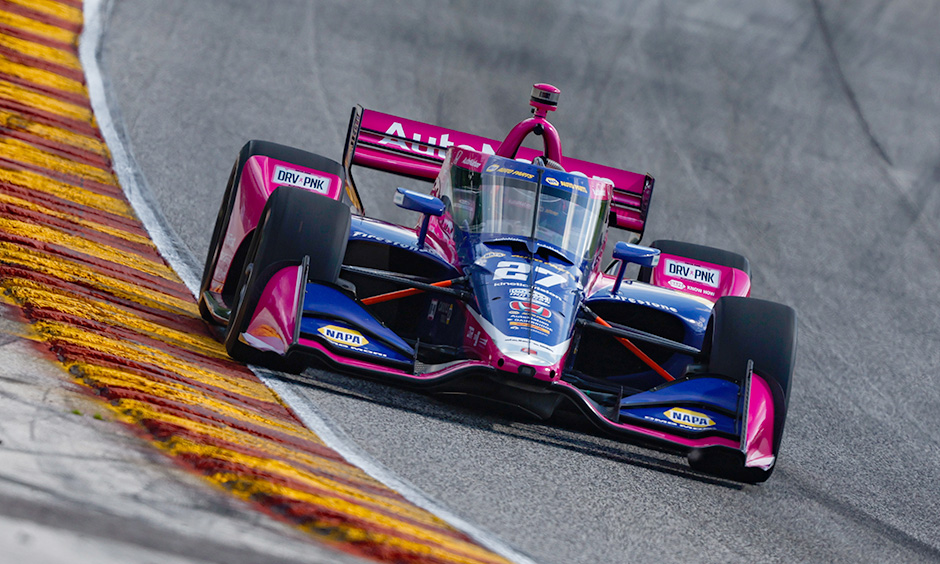 After finishes of fifth and second in the past two NTT INDYCAR SERIES races, Alexander Rossi seems to be back in championship form with Andretti Autosport.

The driver of the No. 27 NAPA AUTO PARTS/AutoNation Honda solidified that notion Friday in the weekend’s first practice at Road America, turning the fastest lap of the session in preparation for Sunday’s Sonsio Grand Prix at Road America presented by AMR, the eighth of 17 races this season.

Rossi arrived at the picturesque 14-turn, 4.048-mile permanent road course on the charge, up to seventh in the driver standings after top-five finishes in the Indianapolis 500 presented by Gainbridge at Indianapolis Motor Speedway and the Chevrolet Detroit Grand Prix presented by Lear at the Raceway at Belle Isle Park in Detroit. Rossi trails series leader Will Power by 74 points. He has finished in the top 11 in five consecutive races.

Friday, Rossi led Friday’s field of 27 car-and-driver combinations with a lap of 1 minute, 45.6027 seconds, the first step toward what could be his first series victory since 2019. At this same track, the Californian led 54 of the 55 laps, winning by more than 28 seconds for his seventh career series win.

“Yeah, it was good,” Rossi said of the first-day Road America practice. “It’s a bit weird to have (the use of) the Firestone (Firehawk) alternate tires on Day 1, so it will be interesting to see how that translates to practice and qualifying (Saturday). The track evolution will continue to get better every session of the weekend.

“Obviously the car rolled off really strong, which is positive on these weekends where it’s so close you’ve got to start from a good point.”

Rossi’s lap edged the best time set by teammate Colton Herta, who posted a 1:45.7361 in the No. 26 Gainbridge Honda of Andretti Autosport w/Curb-Agajanian. Rossi couldn’t be happier to end his 44-race victory drought at this track.

“I love this place,” he said. “I think it’s one of the top five road courses in the world in my book. It’s got everything. It’s just a joy to drive around here.

“It’s a beautiful part of the world, the people are great, the fan turnout is awesome, the weather usually is pretty good, so all A-pluses in my book.”

This race features the series return of Simona De Silvestro, the 2010 Indianapolis 500 Rookie of the Year who has finished as high as second in her 69 career starts. She is driving the No. 16 Paretta Autosport Chevrolet in a partnership with Ed Carpenter Racing.

The presence of de Silvestro and Tatiana Calderon (No. 11 ROKiT/AJ Foyt Racing Chevrolet) gives the NTT INDYCAR SERIES two women drivers in the same race since the 2015 Indianapolis 500 presented by Gainbridge. That race featured De Silvestro and Pippa Mann.

Also back to NTT INDYCAR SERIES action is Callum Ilott, the driver of the No. 77 Juncos Hollinger Racing Chevrolet who missed last week's race in Detroit due to a broken bone in his right hand suffered in the “500” on May 29. Kyle Kirkwood, who has been nursing an injured right wrist from driving into a tire barrier June 4 in Detroit, said he is back to “full grip strength” in the No. 14 ROKiT/AJ Foyt Racing Chevrolet.

Friday’s practice was slowed only once, for a spin of the No. 06 AutoNation/SiriusXM Honda of Meyer Shank Racing driver Helio Castroneves.

All of the action can be viewed on Peacock Premium, NBC’s live streaming platform. The INDYCAR Radio Network also will have coverage on the INDYCAR Mobile App and racecontrol.indycar.com.