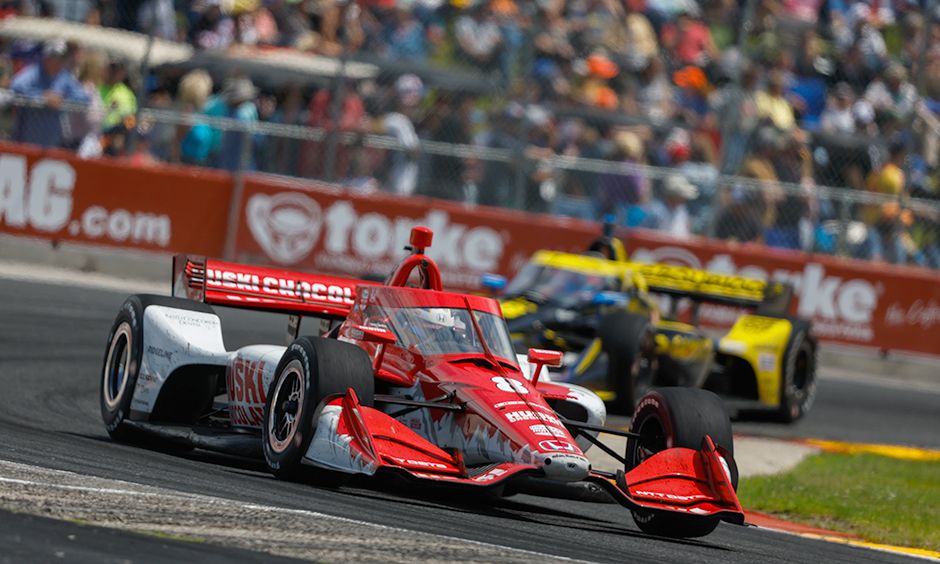 It was mission accomplished for Marcus Ericsson on Sunday at Road America as he powered through contact with his teammate to finish second in the Sonsio Grand Prix at Road America presented by AMR and regain the NTT INDYCAR SERIES points lead.

Ericsson charged to the second step of the podium after a late-race caution bunched the field at Road America. On the Lap 52 restart, Ericsson got a run on Alexander Rossi’s No. 27 NAPA AUTO PARTS/AutoNation Honda and catapulted into second place with three laps to go.

From there, it was smooth sailing for the driver who has been nicknamed the “sneaky Swede” due to his ability to lie low during a race and pounce on the competition when it matters most.

“It was a really good race for us,” Ericsson said. “Got some opportunities there at the end to try and get a better position. Alex (Rossi) had a bit of a slide out of the last corner, so I got a run on him and managed to get by.

“P2 is a really good result for the championship and puts us back in the lead, and I’m super happy about that.”

Ericsson entered the weekend just three points behind Will Power, who won last weekend’s race at The Raceway at Belle Isle Park.

However, early race trouble for Power, in which his No. 12 Verizon Team Penske Chevrolet was spun after contact from Devlin DeFrancesco’s No. 29 PowerTap Honda on Lap 8, set up Ericsson to take back the championship lead with a strong day.

Ericsson has a 27-point lead over 2014 NTT INDYCAR SERIES champion Power and a 32-point gap to two-time series champion Josef Newgarden in third, who won Sunday’s race. It’s the second time in his career he’s led the point standings, with the first coming after he won the Indy 500 on May 29.

“That was one of the goals going into Road America, to regain that lead,” Ericsson said. “I think we’re in a strong position, but it’s going to require a lot of hard work and to keep doing what we’ve been doing.

“I think it’s going to be a tough season, a long season. We put ourselves in a really good position now by leading, so we’ve just got to keep doing what we’ve been doing.”

While the 14-turn, 4.048-mile road course in Elkhart Lake, Wisconsin, is easy on the eyes, Ericsson’s day in the No. 8 Huski Chocolate Chip Ganassi Racing Honda was anything but simple.

Ericsson started the race fourth for his best qualifying effort of 2022, but he quickly got off to a rough start. On Lap 4, Ericsson made a pass for third on his teammate Alex Palou. While driving to the inside of defending NTT INDYCAR SERIES champion Palou, the two made slight contact.

The contact to Palou’s left front wheel was enough to cause something to break on the No. 10 The American Legion Honda. Palou’s car limped off course in Turn 5, and his Chip Ganassi Racing team took it behind the wall for repairs. He returned to the track briefly, but eventually retired and finished last, 27th.

Ericsson regretted the contact with his teammate but said his attempted pass was a fair racing move. He expressed his apologies to Palou and said he was surprised the two cars even touched in the first place.

“From inside the car, the door was open, and I went for the move,” Ericsson said. “I was alongside him at the apex, and I made the corner. From my side, he turns into me from the outside lane. You hate to see your teammate retire from contact with you. That’s the last thing you want to do.

“I don’t see I did anything wrong. It was a fully race move. Might have been a little early in the race, but this race is a track-position race. If you get an opportunity, you need to go for it.”

Palou, who has yet to score a win this season and fell to fifth in the championship, 47 points back, was furious after being checked and released from the infield care center following the early-race contact.

“I think everybody saw that,” Palou said. “I just think he was trying to win the race on the third lap. The car broke, and that’s it. Game over.

“I was surprised that my teammate hit me, not that the car broke. It’s a single-seater car, right? So, if you have a hard hit like that, it just breaks. We can play this game, as well.”

Ericsson continued to defend his move, saying: “There was nothing wrong with that move. That was clear on the TV pictures.”

The Chip Ganassi Racing teammates will have two weekends off to sort their disagreement before the NTT INDYCAR SERIES is back in action Sunday, July 3 with The Honda Indy 200 at Mid-Ohio Presented by the All-New 2023 Civic Type R at noon (ET), live on NBC, Peacock Premium and INDYCAR Radio Network.