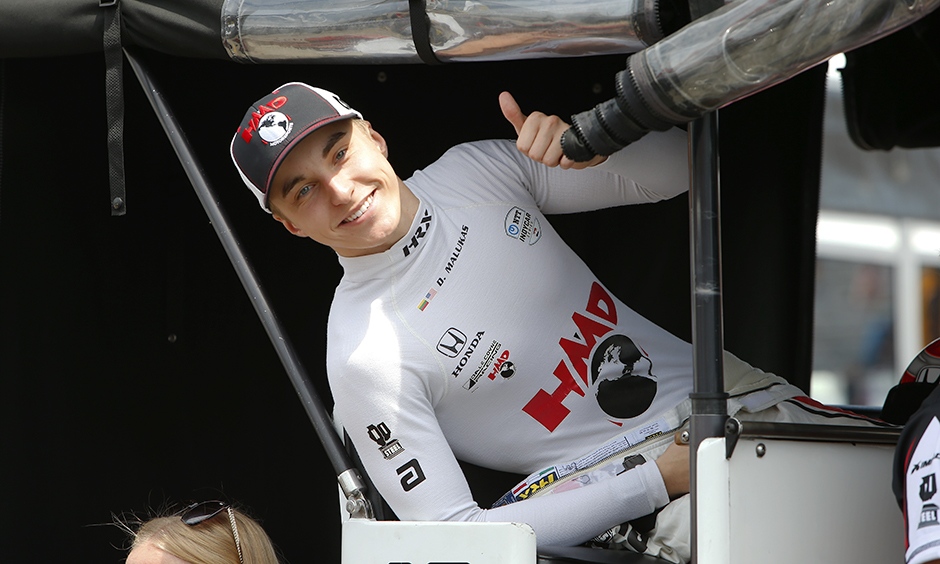 Seeing David Malukas, rookie driver of the No. 18 HMD Honda, qualify fifth Saturday for the Honda Indy Toronto might seem like a surprise at first glance.

Malukas’ career-best NTT INDYCAR SERIES qualifying performance on the streets of Toronto, which came during just his second career appearance in the Firestone Fast Six, can be viewed as a mirror of his recent progress. The strong showing follows his upsurge since the Month of May in Indianapolis, as he has qualified in the top eight in three of the last four races and has top-10 finishes in two races since June 1.

“It was everything we really wanted,” Malukas said of his performance today. “As soon as we made the Fast Six, I feel like it was mission accomplished from there. From that point on, it was trying to get as much information as we can with the second time being in the Fast Six, to learn about the rerun red (alternate Firestone tire), which set to use, etc. We learned a bit more and are going to use it for the next time.”

This mindset of achieving gradual progress, learning from it and using it to achieve further progress paid off for Malukas. Before this weekend, Malukas’ previous best qualifying spot was sixth at Belle Isle, his only other Firestone Fast Six appearance.

Chicago area native Malukas also is coming off placing ninth earlier this month in The Honda Indy 200 at Mid-Ohio, his best finish of his young NTT INDYCAR SERIES career. His progress has been methodical, similar to the groove he found today to advance deeper into qualifying than such series stars as Will Power, Takuma Sato, Graham Rahal, Pato O’Ward and Marcus Ericsson.

And this rhythm, which might at first seemed like a fluke, has become a steady, constant beat. Finding this rhythm attests to the maturity and skill Malukas has acquired as a driver since he chased champion Kyle Kirkwood all the way to the wire in the Indy Lights Presented by Cooper Tires title chase last season.

“Yeah, I think it was just being a rookie, young, stupid mistakes at the start of the season,” Malukas said. “But it’s also getting a feel for everything. Brand-new car, brand-new team, trying to learn how everything is and what to do. There’s a lot to it.”

Now Malukas has a feel for everything with his Dale Coyne Racing with HMD team. Even after a somewhat challenging qualifying session today, with several close encounters with the unforgiving concrete retaining walls, Malukas produced a superb performance while navigating the bumpy Toronto street circuit.

“There’s so many moments where I thought I was going to hit the wall, especially right here in this last corner,” Malukas said. “It’s a spicy one, but overall, yeah, it was very good.”

The maturity and skill Malukus have gained as a driver will be put to the test during 85 laps Sunday on the unforgiving circuit around Exhibition Place in Canada’s biggest city (live coverage starts at 3 p.m. ET on Peacock Premium and the INDYCAR Radio Network). But he thinks he’s prepared and ready.

“I feel like since the Month of May we’ve kind of been, every race, taking a chunk, taking a step out of it,” Malukas said. “Everything seems to be getting along more. We’re just keeping this momentum. Going into a new race weekend is kind of like, ‘Let’s keep going, keep this momentum.’”

Now that he’s found his rhythm, it’s very likely that Malukas will continue to improve even more, and it won’t be a surprise anymore to see his name on the top 10 of the time and results sheets.

“Overall, I think the team all around just pushes that much more to make sure we can keep going there and making it, doing these good results,” Malukas said.