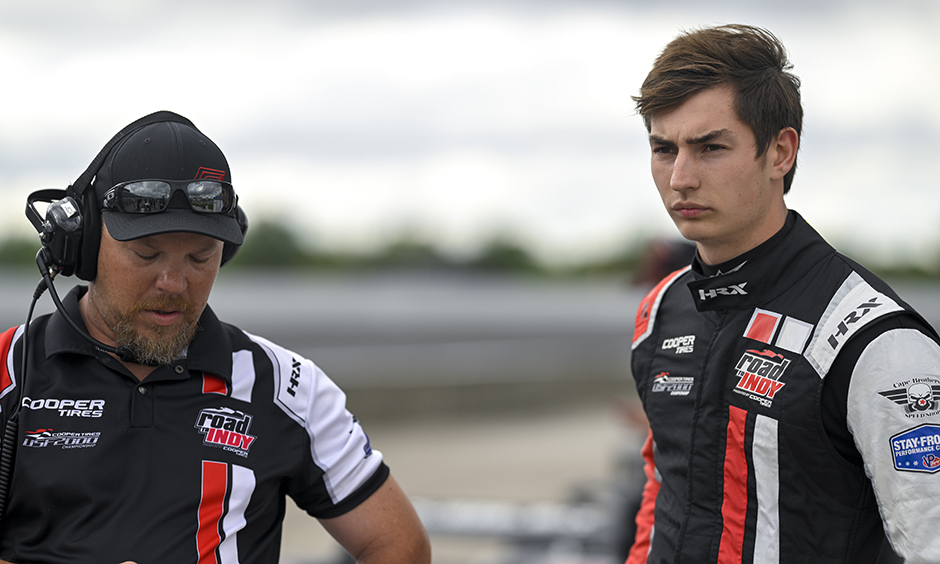 There is nothing conventional about how Jagger Jones ended up on the path toward the NTT INDYCAR SERIES.

When the checkered flag fell on 2019, the grandson of 1963 Indianapolis 500 winner Parnelli Jones, had wrapped up a stout campaign in ARCA Menards Series West stock car racing. He collected one win at All American Speedway, along with a trio of second-place results en route to a runner-up finish in the championship to current NASCAR Camping World Truck Series veteran Derek Kraus.

When the global pandemic hit in 2020, though, potential opportunities to leap into the Truck Series seized as sponsors pulled out and lack of funding put Jones on the sidelines for two years.

“I didn't have any money to go racing for all 2020 and 2021,” said Jones, 20. “I didn't do a single race. I didn't really know if I was going to be able to make it happen on the financial sponsorship side of things make that comeback.”

The long wait for Jones to return behind the wheel came earlier this year with Cape Motorsports in USF2000 Presented by Cooper Tires, where he captured one win and five podiums to place fourth in the overall standings.

Looking back after the journey to return to racing has come full circle, Jones found a silver lining.

“I think the biggest positive from that gap is the fact that I'm now racing in the open-wheel side of things,” said Jones, who attends High Point University in North Carolina. “As much as I love NASCAR racing and have so much respect for it, I think me personally as a driver, the open-wheel side of things in INDYCAR is where I should have been all along. Not saying anything bad about NASCAR like I made a wrong decision going down that path, but driving styles, me as a personality, my desire's always been to win the Indy 500.

“I'm happy that I'm in the open-wheel realm now, and I don't think that would've happened without a break or time to rethink things. That would be the biggest positive.”

Now, the resurgence of Jones’ career progresses upward as he prepares to compete next season in Indy Lights – the top development category for the NTT INDYCAR SERIES. The step up also comes with Cape Motorsports, which last fielded an Indy Lights entry in 2010 for Gustavo Yacamán that also included a partnership with Wayne Taylor Racing.

“I've been competitive in every series that I've ever raced in, and I don't really expect anything different,” Jones said. “I know the competition in Lights is pretty stacked and being with a new team, but the Cape Brothers, they've been at this level before. They are so dedicated to using every resource, doing everything and even beyond what anyone else is doing.”

With a sterling pedigree that features 14 USF2000 championships spanning 22 years, there is little doubt Cape Motorsports will adapt and evolve into title challengers in Indy Lights.

“I wouldn't just go with a new team, but that's why I went to Cape because they've won so many championships and it's a safe bet,” Jones said. “But seeing that and seeing their work ethic and all the effort they put into it from every aspect is the reason why I trusted them with this new move for them and this new move for me.”

Additionally, third-generation talent Jones will carry the No. 98, a number made famous by his grandfather on the hallowed grounds of Indianapolis Motor Speedway.

“I definitely thought about that a little bit,” Jones said. “98 has just been a number that's just been so associated with our family, so might as well keep that going. Growing up all through karting and through the first stuff I raced, I was all 98 until the team aspect came in where team’s own number. I've always wanted to be 98. When the team said it was available and they were willing to do it, I was all for it.”