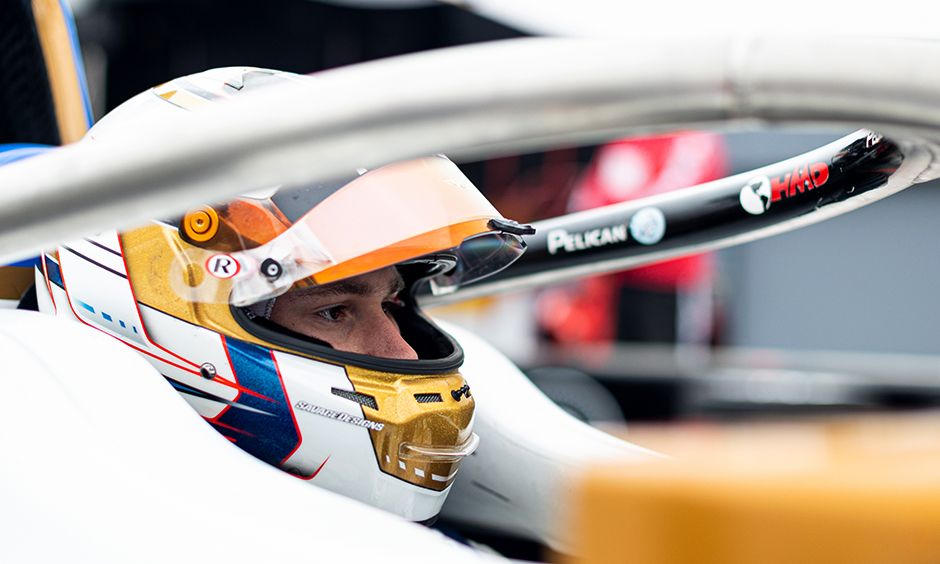 Christian Bogle might be 21 years old, but there is no mistaking he has an old soul.

The Louisiana native, who just finished his second season in Indy Lights with HMD Motorsports with Dale Coyne Racing, carries himself like someone born in the mid-1980s or early 90s.

That notion goes beyond his preference in music that comprises of System of a Down, 50 Cent or Eminem at a time when the world “Forgot About Dre,” among others. The identity of Bogle at the core is his love of cars; not only admiring each and every signature curve or engine growl, but also being a throwback from a bygone era and wrenching them.

“I always grew up around cars,” Bogle said. “I used to hang out with my uncle a lot and he did a lot of restorations on old cars and stuff, and he still does it today. I used to always watch BBC ‘Top Gear.’ I absolutely love those guys. That's also got me into cars. Obviously, I didn't really pick up the racing aspect until like 2018, but I've always just had a thing for working on and just being around cars, in general, no matter what era they're from. I just love any car.”

And like many with a passion for getting their hands dirty, Bogle has a project car – a 1992 Nissan Skyline GTR.

“It's like 10 percent driving, 90 percent fixing it,” he said. “I've done quite a bit, but it's worth every penny because it's fun to tinker with, and at the end of the day when actually you get it running and you get to drive it, it's so worth it.”

Bogle recalled the unfiltered influence of time in his uncle’s shop, with some of the early days spent sandblasting various classics. In many ways, it is what he attributes as inspiration for his love of cars.

“It's pretty fun to get involved with that stuff, especially when you're younger,” Bogle said. “I think whenever you're younger it's easier to pique your interest with certain things, and it really sets the course for what you like growing up. So, just being around it a lot, I think that's why I've found such an interest in tinkering and working on cars.”

Yet, there is an ongoing problem he’s dealing with.

“Yeah, it's hard to find good car groups nowadays where people actually truly know the in-and-out workings of what they're looking at,” Bogle said.

The unwavering love for cars also ignited a passion for racing.

Unlike many other drivers in motorsports that began karting at an early age, Bogle was a late arrival and didn’t step onto the racing scene until 2018, when he was 17. The learning curve was initially steep, with a run in the F4 United States Championship. However, the following year he found success and swept the F4 weekend at Circuit of The Americas with the team owned by Indianapolis 500 veteran and 2006 Indy Lights champion Jay Howard, which provided confidence and validation of a future behind the wheel.

“At the beginning of the year, we were seconds off the pace – we're talking three, four seconds off – and at the end of that year we end up going to COTA and completely sweeping the weekend,” Bogle said. “So, in a matter of a year we've gone from a back-marker car to front-running and winning races in F4. It's still F4, one of the junior formula categories, but to me that was a moment to where I was like, ‘If I work at this, there's a possibility that I can do this in the future.’ There's progression. We haven't stalled out, and there's an opportunity here, essentially.”

Now, with his third year in Indy Lights looming in 2023, the focus for Bogle is about sharpening his craft.

“It's just those smaller refinements where you're looking for tenths (of a second), and it can move you up a few places or drop you down a few places in qualifying,” said Bogle, who finished a career-best fourth in June at Belle Isle. “It's amazing to me how small the differences are. Just driving, let's say the way you brake into a corner and it can be worth just a few tenths and it can move you up like five positions in qualifying, and that makes or breaks your weekend sometimes at certain tracks like Barber, where it's extremely hard to pass.

“Qualifying is absolutely everything there, and that’s where I’ve tried to improve most and where I tend to struggle the most is really trying to figure out how to get the most out of the car at times.”