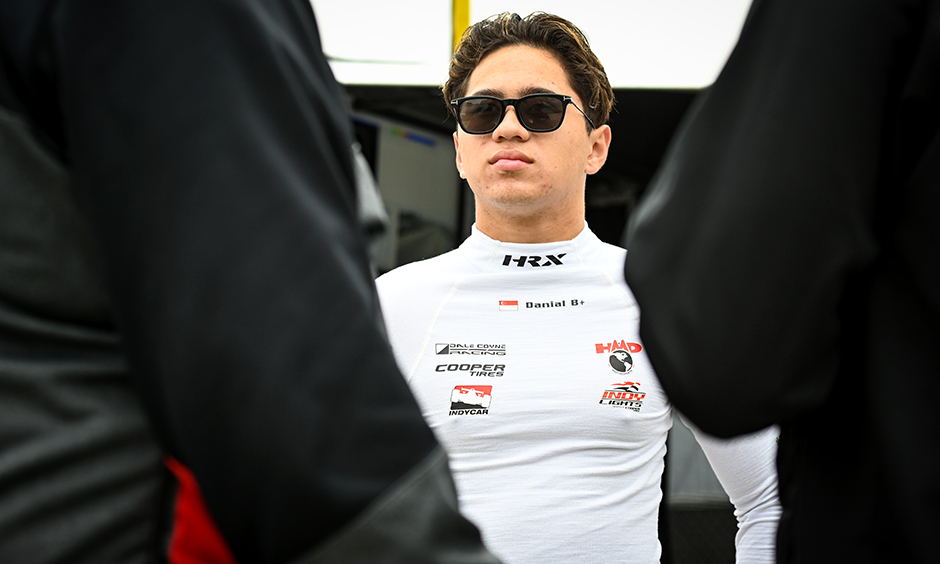 Danial Frost is likely to have some sleepless nights over the course of the next year after being hungover with adrenaline from his first NTT INDYCAR SERIES test last month.

After propelling the No. 68 HMD Motorsports with Dale Coyne Racing entry to his first Indy Lights win (Indianapolis Motor Speedway Road Course, Race 1) and finishing seventh in the 2022 championship standings, the Singapore native was given an opportunity to step up in a private test at Sebring International Raceway with Dale Coyne Racing. It was a positive outing by Frost, who still can’t stop smiling from the experience.

“That was a dream of a drive to finally hop in something that we've been looking forward into to driving since I started this career,” Frost said. “That was definitely an eye-opener to be able to drive that and to really feel what it's all about and to work with the team is amazing; just to see how they operate versus how we operate at HMD is a completely different ball game. But it is definitely an experience, and I hope to be in that car again.”

Additionally, that test only adds more fuel to focus and perform in Indy Lights in 2023.

“I would say that little tease is probably giving me lots of nightmares when I sleep,” Frost said. “Now, obviously that I'm back in the Lights car is nice, but I want to see myself in INDYCAR. I hope in the future, but we have to still focus on getting the results and doing well this year so we can make that happen.”

Frost, 21, kept the momentum rolling and topped the charts a few days later in his Indy Lights machine at the Chris Griffis Memorial Test on the IMS road course.

The outing by Frost not only showcased his ability to transition back to the Dallara IL-15 chassis but showcased his mental maturity in staying present on the task at hand.

The past two years Frost has gone from earning podium results to standing on the top step. Now, with 34 starts under his belt in the top developmental category for the NTT INDYCAR SERIES, he aims to be pushing for championship glory in 2023 with the HMD-Coyne team.

“The third year is not a bad deal for us,” Frost said. “We've not had as much experience as some of the other guys. So, I think it's a positive thing that we are staying for an extra year before jumping into INDYCAR. I'd say that this is something that we probably need to do first and prove that we can do it. In terms of experience, I think that's the number one thing that we're lacking. The last two years has been a learning time, right? So, we need to focus on what we needed to do.

“Now, I think we can try to finally put something together and hopefully, there's no bad luck like how we had last year. That's what we're looking for and aiming and hoping. We'll just have to see what this next year can give us.”