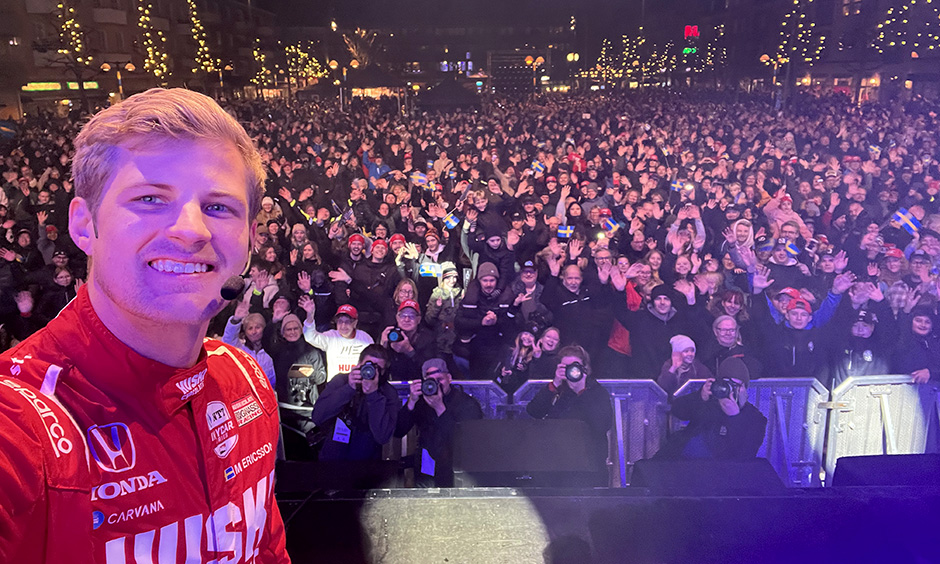 The winner of this year’s 106th Running of the Indianapolis 500 presented by Gainbridge returned to his native Sweden over the weekend for a memorable celebration among family, friends and fans, with the famed Borg-Warner Trophy also along for the ride.

“Yeah, it's been incredible,” said Ericsson, 32. “It's been a crazy schedule. We've trying to really maximize the exposure of the trophy and of me and then of INDYCAR here in Sweden, and the turnout has been incredible. It's been great.”

The calendar has been full, too, as Ericsson has showcased his victory in “The Greatest Spectacle in Racing” for Chip Ganassi Racing and the ultra-competitive NTT INDYCAR SERIES across Scandinavia with appearances on national television morning talk shows, magazine photo shoots, autograph sessions with thousands of signatures, along with multiple dinners that spanned from close friends to Swedish officials and sponsor Huski Chocolate. 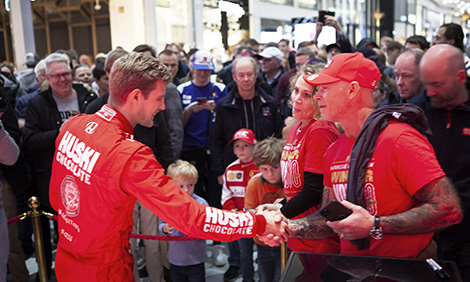 Ericsson also turned up with his freshly minted face on the Borg-Warner Trophy at the largest mall in Scandinavia. There was also a stop in Orebro, Sweden, at the statue of Swedish Formula One legend Ronnie Peterson.

Perhaps the most memorable stop was returning to his hometown of Kumla as roughly 8,000 people -- more than a third of the city's population of about 22,000 -- flooded the town square in frigid temperatures to pay homage to their local hero in a one-hour celebration.

The festivities included a chef in Kumla telling the crowd about when Ericsson served an apprenticeship in his kitchen when he was 12, special videos featuring congratulations from all of Ericsson’s Chip Ganassi Racing teammates, Ferrari Formula One driver Charles Leclerc, childhood friends and mentors, and Swedish fans. Ericsson signed more than 1,000 autographs after the ceremony and finished the evening with a family dinner at his favorite pizzeria in Kumla.

“That moment being up on stage and seeing all the people, not only friends and family, but all the other people that came out was just incredible,” Ericsson said “It's that day I will always remember, let's put it that way. I could never imagine how many people would come out and share this with me.”

Swedish media covered the tour stops, including one paper printing a photo of Ericsson and the headline “King in Kumla.” The fan turnout of the trip, which concludes today, has been so profound that it also got the attention of Michelle Collins, global director of marketing and public relations at BorgWarner.

"The response and reaction Marcus and the Borg-Warner Trophy got in Sweden was incredible,” Collins said. “Race fans and media truly embraced the events in Stockholm and his hometown of Kumla. Everyone was so enthusiastic and appreciative.

“BorgWarner was so happy to support all the memorable events with Marcus over the past few days. Winning the Indianapolis 500 is something he will always remember and to be able to share those memories with friends, family and fans was amazing to see throughout Sweden. Marcus is truly a hero and revered here - it was so special." 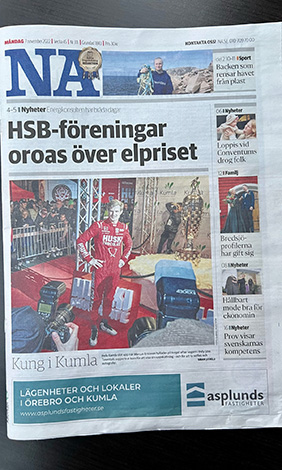 “For Huski Chocolate, having Marcus in Sweden with the Borg-Warner Trophy has been truly unique, and I’m so proud for our team to be able to share this moment with him, his family and the fans,” Manninen said. “We at Huski share the same values with Marcus: Have a kind heart, never give up or back down, be loud when needed, always do your best and have fun while doing it.

“We had 8,000-plus friends of all ages at Kumla town square to celebrate Marcus on Sunday evening. I could not have dreamed of a better way to wrap up our weeklong Sweden tour with him and the Borg-Warner Trophy. I guess we have to do this next year again, Kalas! (party in Swedish).”

For his part, Ericsson, driver of the No. 8 Huski Chocolate Chip Ganassi Racing Honda, has been looking forward to the celebration back home ever since tasting the milk last May 29 in Victory Lane at Indianapolis Motor Speedway.

“It was a bit hard in the season, to straight off the victory going into the most busy part of the season,” Ericsson said. “So, it was never really much chance to celebrate and really do all those things you want to do after you win the biggest race in the world. It's something I've been looking forward to, and now after the season I've been doing a lot of cool stuff that goes with winning the ‘500.’

“This past week has definitely been the highlight of my offseason. It's been just an incredible week. The weekend going to Stockholm and then the biggest shopping mall in Scandinavia and seeing people there for hours and hours and then my hometown at city square has just been super cool.”

As the trip winds down, Ericsson plans to spend time back home, with limited trips planned back to the United States ahead of the 2023 NTT INDYCAR SERIES season, and he’s already motivated to go a step further.

“This was the big highlight, and then there's always things coming up,” Ericsson said. “I'm going to have to go to the States a few times here before the end of the year but try and spend some time here in Europe and Scandinavia and Sweden, as well, to recharge my batteries and come back even stronger next year to try and defend that Indy 500 title and go win that championship that we were after this year, as well.”