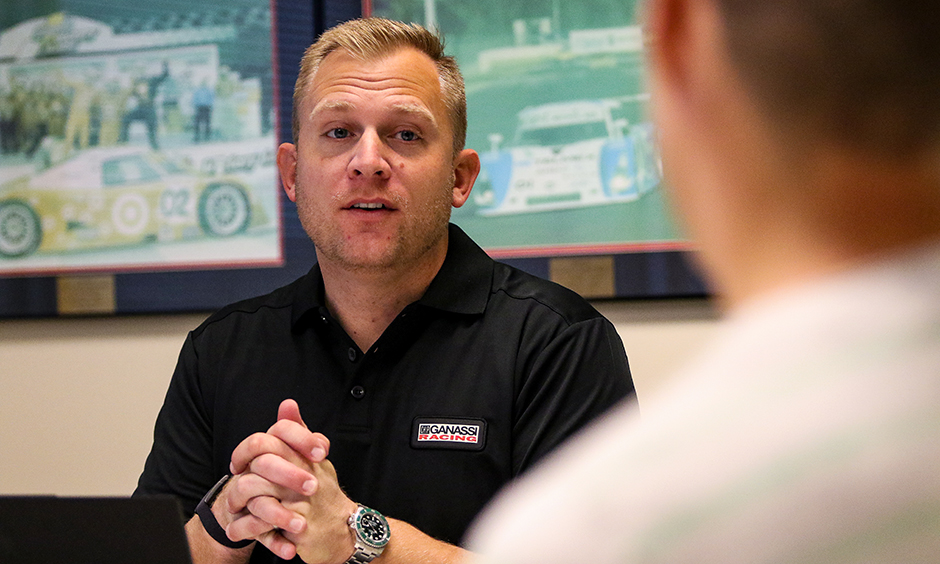 Former Arrow McLaren SP president Taylor Kiel, whose entire motorsports career had been with that Indianapolis-based organization, is in new surroundings at Chip Ganassi Racing, although some elements are oh-so familiar.

The office next to his is occupied by his stepfather, Mike Hull. Many of his new colleagues have long been friends in the NTT INDYCAR SERIES paddock. Preparing cars for the upcoming season and the schedule that accompanies them is much the same as it was at his former team. The drive to work? Only a 3-mile deviation.

And yet, this job change reminds him of when a youngster changes schools: New friends, new teachers, a fresh start to what’s next.

Now that Kiel is a few days into his new role as a team manager at CGR, he agreed to discuss the differences in this edition of “Five Questions with ....”

Q: The obvious first question is, had it long been the plan for you to work with Mike Hull, who has been in your life for more than 30 years? Were you just sitting in the living room one day, and the conversation turned to working for him?

Kiel: Yeah, more or less (laughing). It’s been an ongoing conversation for us for years, really. It was a situation where I originally needed to go out and do my own thing, establish myself and build my personal brand, so to speak, and understand my own ways of working so I could make sure I could cut it in this business. I think I’ve proven that – I’ve certainly proven that to myself, and I think I’ve also proven that to my colleagues and competitors alike. Opportunities started to open up over the years, and I expressed to a handful of people that I was confident I’d come to a point in my career where I felt like I needed a change, and there was an opportunity there (at CGR). Organically, it went from there.

Q: You’re very early on in this job, but how is it working with Mike and, from an office standpoint, how is it being so close to him on a daily basis?

Kiel: I expect it to be fine because we’ve done a really good job over the years of separating church and state, whatever the analogy is. We never really talked about work unless we were racing against each other – your guy blocked my guy, a few conversations like that. Ultimately, we’re family, so we always kept it that way and the sensitivities of our respective positions (with different INDYCAR teams). We kept (conversations) very above board. But now we have the opportunity to really go in depth about (our jobs) and understand where (CGR) has been in the past, where it is now and how we’re going to go in the future. That’s exciting for me, and it opens up a whole new category for us to chat about, which is cool.

Q: You worked at Arrow McLaren SP and its predecessor for 14 years, going from the bottom of the organizational chart to the top, but you were always in the NTT INDYCAR SERIES paddock. Given that Arrow McLaren SP and CGR are located so close to one another and there are so many races each season, is it fair to say you knew a lot of the people you’re now working with, perhaps even 30 to 40 percent of them?

Kiel: Well, probably less than that because there are a lot of people (on teams) that never go to the racetrack. Certainly, I’m familiar with a lot of (CGR) people who work on the INDYCAR side, so I’m able to get up to speed with a lot of those folks – Blair (Julian), Barry (Wanser), (Chris) Simmons – key stakeholders I’ve been very familiar with for a very long time, even beyond that. We’ve all ran in the same circles for a while now, right, so that’s very helpful. I think it would be very difficult coming into a situation like this this late in the offseason without any personal relationships, so that’s definitely been a big help.

Q: Chip Ganassi Racing not only is a championship-winning NTT INDYCAR SERIES team, it competes in other forms of motorsports, too, with much success. You’ll have your hands in some of those other disciplines, too. Is that something else that excited you about the job, and is it fair to say you have much to learn on that side of the business?

Kiel: The beauty is, all of that does not have to be my total focus. Mike O’Gara has the sports car program totally under control, and that program is a fantastic program. When you work in a certain industry like INDYCAR for so long you’re focused on some of the various obvious goals that everybody is focused on – winning the Indy 500, winning the (season) championship, trying to win races here and there – and you get tunnel vision on what it takes to do that. So, for me, the sports car program or the Extreme E program or anything else we try here in the future allows me to take my blinders off for a minute, see some different ways of working, see different rules, see different strategies, see different circuits, people, equipment, et cetera. That’s really what it is. Other organizations have multiple programs, but they’re siloed. Here, you’ve got exposure to everything under one roof. We all sit in the same room working together. There’s a lot of information shared across the different departments. It’s a constant think tank here, which allows people to be more well-rounded and have more depth to their thoughts in how they go about working to be more efficient, technically savvy or operationally savvy, whatever it might be. That’s what is exciting for me.

Q: You had about two months where you officially were unemployed. Racers never get long breaks like that. How was it?

Kiel: I had a ridiculous amount of FOMO (fear of missing out), I can tell you that. I’ve been through a lot of these INDYCAR offseasons and knew what I was missing, and ultimately my wife, Katie, did a great job of keeping me grounded and telling me this is the longest break you’re ever going to have for a long time so let’s try to make the most of it. I spent a lot of time with her and our daughter, who is just over 1 year old now, and those moments you can’t get back. I tried to be the best stay-at-home dad that I could. We finished the kitchen (remodel), we finished the downstairs, we pretty much got all of the house projects done. I knocked those out pretty early because I didn’t want to be up against the deadline and being flustered as we started this new (work) chapter. What was exciting about (CGR) is that it’s a very established organization – there’s no doubt about it – but there’s a ton of growth left and staying static is not in the DNA here. They’re always doing, always growing, always trying to find out what the next thing to go race. I saw that as a huge opportunity to expand my skillset, and I’m looking forward to it.