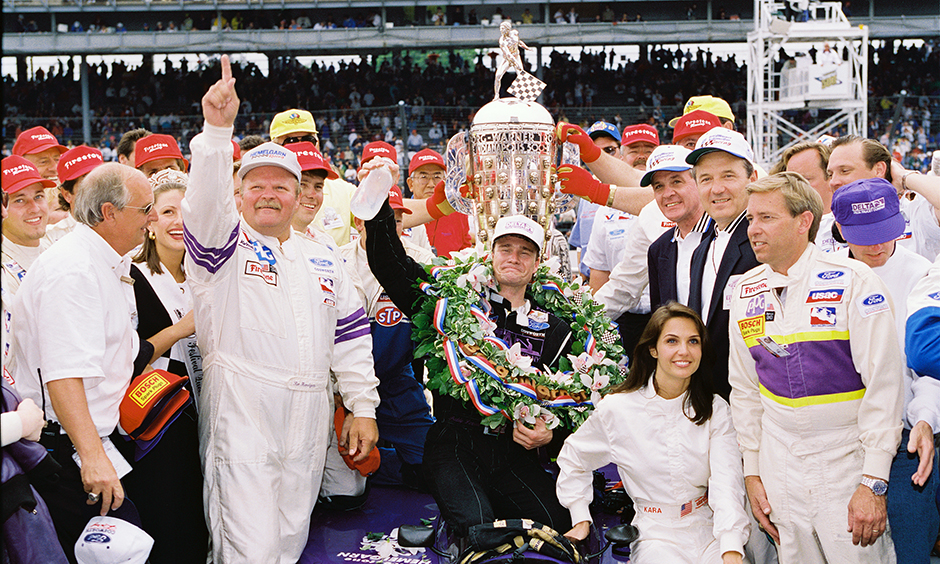 Today’s question: With Thanksgiving tomorrow, it seems appropriate to look back and ask, who are we thankful for this holiday season that first ignited our interest in motorsports or INDYCAR SERIES racing?

Curt Cavin: I trace both my interest in motorsports and what led to my career in journalism to the same person: my paternal grandmother, Marjorie Cavin. A frail and soft-spoken woman from a family of Indiana farmers, Marjorie was a frequent attendee of the Indianapolis 500, and she would come home from Indianapolis Motor Speedway with an assortment of souvenirs – ticket stubs, a program, an assortment of newspaper clippings – and artfully produce scrapbooks. For reasons unbeknownst to me, I never got to attend the race with her, but while at her home north of Lebanon, I would pour through those scrapbooks to learn everything I could about the race I had listened to on the radio. I was so entertained by those books; they sparked my interest in assembling my own – surely the reason I worked on two of my high school yearbooks. It was while working on those yearbooks that Fran Walker, a longtime teacher at Western High School, encouraged me to study journalism, which took me to Franklin College and my dream job at The Indianapolis Star, where early on I got the chance to cover the “500” and later traveled to much of the world covering the sport. Completing the circle, I have long considered Johnny Rutherford and Mario Andretti two of my favorite people in this sport, and they happened to have unquestionably been Marjorie Cavin’s favorite drivers. I often think about how all of this came together, and I certainly will again on this Thanksgiving.

Joey Barnes: While I grew up in a household that was all about the late Dale Earnhardt, the first driver that really pulled me into racing was Michael Andretti. The year was 1996, and I just remember always seeing that black No. 6 Newman/Haas Lola Ford Cosworth toward the front and scrapping with the ‘Target Tyrants’ of Chip Ganassi Racing’s Jimmy Vasser and Alex Zanardi. To the kid version of me at that time, it felt like an underdog taking the fight to the favorites. Ultimately, he ended up splitting Vasser and Zanardi to finish runner-up in the championship, getting the tiebreaker over the latter by virtue of wins (5-3). I became so consumed with the precision and fierceness of open-wheel racing that it led me to watch my first Indianapolis 500 that year and watched Buddy Lazier win, making the ultimate comeback after shattering his back in a practice crash earlier that season. It was an unbelievable story. I was in awe of all of it, and very much still am.

Paul Kelly: Full disclosure: I did not grow up in a racing family. At all. The Kelly’s were – and still are – very much a stick-and-ball sports family. I’m the outlier and came to racing as a passion and vocation in my first job in newspapers when I took over the motorsports beat at the Binghamton (New York) Press & Sun-Bulletin in 1988. My editor asked me, “Do you know racing?” I said, “Well, I watch the Indy 500 every year.” He replied, “OK, you have the beat.” That led me on a 34-year journey of working in racing and its terrific people that still fascinates and pleases me today. I watched the delayed highlights of the “500” as a kid because it was – and still is – THE RACE, even if you’re not a racing fan. The speed, color and pageantry pulled me in, but there is probably one person I must thank for spawning and feeding the attraction – ABC play-by-play and hosting legend Jim McKay. When McKay was in the booth at an event, you knew it was big. He covered the race like a real journalist, talking about the positives and negatives. Plus, he delivered his thoughtful prose with such gravitas, knowing when to speak and when to stay quiet, when to stay calm and when to elevate his voice to amplify the drama, like few others in sports broadcasting. So, I’m thankful to Jim McKay for unknowingly nurturing my interest in racing, which became a passion and my career.