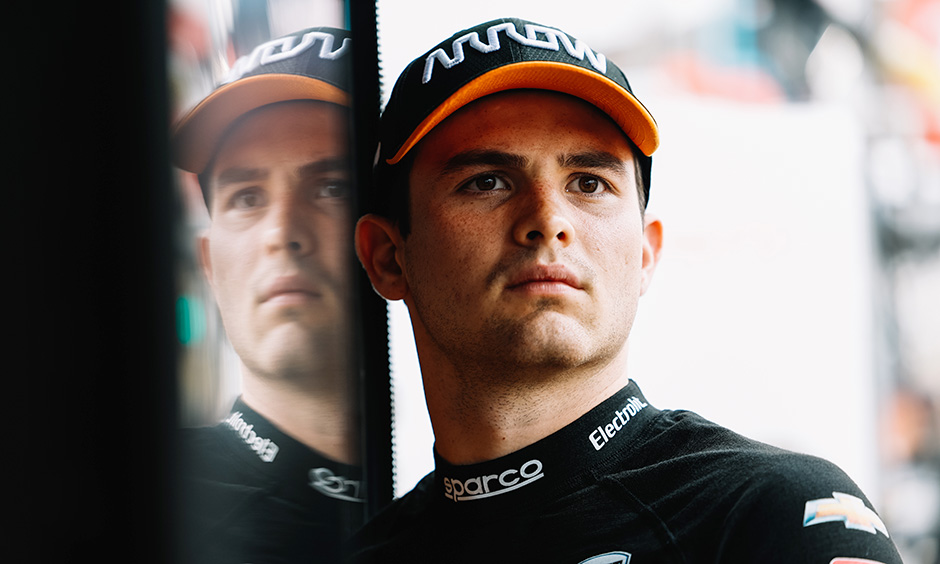 Any championship aspirations Pato O’Ward has in 2023 won’t only hinge on his ability to adapt to ever-changing conditions on the track, but also within his team.

The upcoming season in the NTT INDYCAR SERIES will feature a new voice in the ear of the 23-year-old Mexican as former strategist Taylor Kiel, who also served as Arrow McLaren Racing’s team president, departed over the offseason and joined Chip Ganassi Racing. The duo captured four wins, 13 podiums and five NTT P1 Awards over the past three seasons.

With roughly two months remaining before the season-opening Firestone Grand Prix of St. Petersburg presented by RP Funding (March 5 on NBC), it is still undecided who will be calling strategy atop the timing stand for O’Ward’s No. 5 Arrow McLaren Racing Chevrolet.

Recognizing his fiery personality while battling on the racetrack, O’Ward prefers someone with a different demeanor on the radio.

“Hopefully, it’s a very nice and calm voice just like Taylor had because I think in that way opposites do attract, because I am very animated and he was very calm and collected and like a rock,” O’Ward said. “I really don’t know who it is going to be. But whoever it’s going to be, I hope it’s someone that’s in the same ballpark where Taylor was in terms of tone and how he said things because it was straight to the point.”

Since 2003, the NTT INDYCAR SERIES champion has driven for Andretti Autosport, Chip Ganassi Racing or Team Penske. However, O’Ward has helped push Arrow McLaren Racing to consistent frontrunners challenging to reset the ‘Big Three’. Each of the past three seasons, he has been the highest-finishing driver in the overall standings (fourth, 2020; third, 2021; seventh, 2022) to not be affiliated with Andretti, Ganassi or Penske.

McLaren also committed a bigger investment into its INDYCAR program over the offseason, which could make all difference to taking that next step – winning the Astor Challenge Cup.

“Hopefully the growth and supercharge that has been brought in by the whole McLaren organization this year will get us there,” O’Ward said. “I don’t think we’re quite there, but when St. Pete comes and once we get done with the first few races, I think we’re going to have a good idea of where we’re at.

“We just keep growing. We keep getting better every year. I do know that we are more than capable of being one of the leaders of the series in every way, and I think this year might be it or for sure very soon. I really don’t know when it’s going to be, but I have a lot of faith in the team behind me.”

When examining if any potential adjustments need to be made, O’Ward believes the team shouldn’t be doing much differently, noting he was in contention for wins and podiums “probably more than 85 percent” of last season.

While the focus is always on executing at a high level to score more victories, podiums and poles, the main emphasis comes down to minimizing mistakes.

It was really a tale of feast or famine for O’Ward over the 17 races in 2022. He scored eight top-five finishes, which included two wins, along with a notable runner-up in the 106th Running of the Indianapolis 500 presented by Gainbridge. There were also random mechanical miscues as well that plagued the group to collect eight finishes outside the top 10, with three of those results being 24th or worse.

“That’s just something you’ve got to live with and move on from,” O’Ward. “You can’t really control when those things will happen, but what you can do is keep putting yourself in the situations to win races and be on podiums. That’s ultimately what is going to give you the opportunity to fight for the championship some years. Some years will be luckier and some years will be a little bit tougher, so those are character-building weekends that you just got to learn from, move on and make sure it doesn’t happen again.”

While every year brings renewed aspirations, O’Ward doesn’t have a specific target number of wins in mind. But, like any competitor, he wants more. In fact, the only thing on his mind is much of the same: fighting for glory in the Indianapolis 500 presented by Gainbridge and the championship.

“I don’t like to put certain numbers on it because every year is different and every year always goes unexpectedly,” O’Ward said. “Every year has its fair share of challenges and unique things that may become a shock or come as expected. But being in position to fight for the championship, fight for the Indy 500, win more races. The past two seasons I’ve won two races in a season, I’d love to double that. And a combination of the poles I got in ’21 and ’22, I think that’d be fantastic. I think that’d be a great year.

“It’s just all about how we can position ourselves every single weekend. The results will come if we make sure we’re doing our jobs correctly. As a rough idea, that’s what I want to do; I want to give the team a championship. I want to give them a ‘500’ win and just keep on winning. That’s why we do this.”