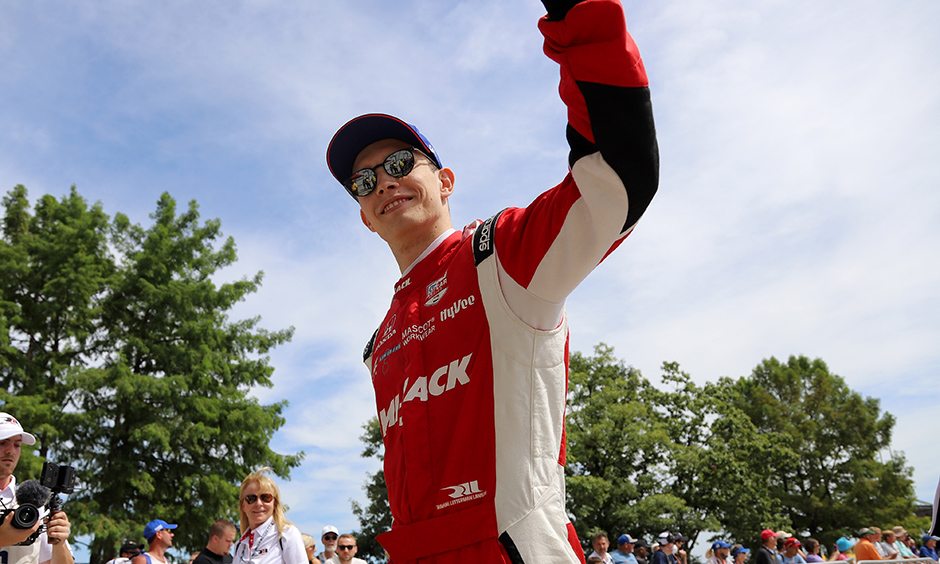 Christian Lundgaard is forging a new path in his young life, venturing to a racing series and a country both mostly unknown to him, but full of optimism that a renewed spark in his lifelong passion will lead to much success.

On Wednesday, Lundgaard and Rahal Letterman Lanigan Racing announced a multiyear deal that will see the Danish driver take over the No. 30 Honda in the NTT INDYCAR SERIES starting next season.

The move to North America’s premier open-wheel series comes after a successful stint in Formula One’s ladder system. Lundgaard, 20, competed in Formula 3 in 2019, scoring one win at Hungaroring along with two podiums. In 2020, he moved up to Formula 2 for ART Grand Prix, where he scored two wins, at Red Bull Ring and Mugello, along with six podium finishes.

But during a 2021 F2 campaign that has brought three top-10 finishes thus far, the Alpine Academy driver started looking for a change, both professionally and culturally. After a test with RLL and one NTT INDYCAR SERIES race – the Big Machine Spiked Coolers Grand Prix on the Indianapolis Motor Speedway road course in August, where he qualified fourth and finished 12th – he realized this was exactly what he was looking for.

“I’m excited to be here,” he said. “I came over to do the race without any expectations, and it went pretty well. The whole culture in America is so different than what I'm used to. When I got the taste for the INDYCAR car and had the Barber (Motorsports Park) test, I think for me it was a new experience, something completely different than what I was used to.”

Team co-owner Bobby Rahal said RLL president Piers Phillips first brought Lundgaard to his attention after noticing his success overseas. So, they put Lundgaard in the No. 45 car, which the team ran part time in 2021 and used to test who they wanted in the car full time next season. Santino Ferrucci and Oliver Askew also had stints in the car.

Rahal said every step of the process with Lundgaard went extremely well, and he thought Lundgaard presented the brightest future for the three-car organization that includes drivers Graham Rahal and Jack Harvey.

“The test at Barber went very, very well with Christian,” Rahal said. “We just felt that the package that we saw that Christian really represented the direction we wanted to go, and so that's why we made the decision to go with Christian.”

Lundgaard has aspired to race professionally his entire life. His young racing career has taken him from his homeland of Denmark, through Europe and beyond in karting and then in single-seaters.

He comes from a racing family, which includes his father, Henrik, who was a European Rally champion. His mom is a former motocross racer, and his uncle, cousin and brother have all raced.

Lundgaard was successful from a young age, and it led him to join the prestigious Alpine Academy in 2017. His goal was to reach Formula One, in which Alpine F1 Team fields cars for two-time F1 World Champion and Indianapolis 500 starter Fernando Alonso and Esteban Ocon.

But with limited success this season (he’s 11th in the F2 championship standings) and a cap on where he can go in F1 due to Alpine having no openings, Lundgaard admits it has taken a toll on him. After watching Romain Grosjean spark a renewed interest in racing with his part-time NTT INDYCAR SERIES season in 2021, Lundgaard realized he also wanted that.

He said his NTT INDYCAR SERIES debut in the No. 45 Honda was a refreshing take on racing in a series that prioritizes driver skill over aerodynamics. All told, he admits he was surprised at how much he enjoyed his time at the Racing Capital of the World.

At a crossroads in his young career, he decided he needed to follow the route that makes him happiest. And that route is a 17-race NTT INDYCAR SERIES schedule, which will include his oval debut at Texas Motor Speedway and the 106th Running of the Indianapolis 500 presented by Gainbridge.

In preparation for the change in scenery, Lundgaard said he spoke to many drivers that made the transition to the NTT INDYCAR SERIES and discussed the differing cultures within the open, friendly INDYCAR paddock and the more isolated international racing culture.

“In the end, it actually came down to what do I personally want and what will I enjoy, and for me when I did the race over here, that's what I enjoyed the most,” Lundgaard said. “I haven't enjoyed a race weekend as much as that one for years, except obviously when you have a very good weekend in whatever you're doing and you are winning and dominating.

“It's more about racing than it is about so much else. Here, you come, you enjoy, you like driving. When you begin in Europe, you have the, let's say the proper feeling of racing that you enjoy, but the more you do it you kind of die, the spirit dies.”

Lundgaard said racing in the NTT INDYCAR SERIES lit “a completely new spark that fired in me,” and he is eager to stoke that into a flame during his rookie campaign. He’ll race for Rookie of the Year honors alongside a batch of new drivers that includes fellow F2 graduate Callum Ilott.

But before he can light that fire, Lundgaard has two more F2 races on his schedule, Dec. 4 at Saudi Arabia and Dec. 11 at Abu Dhabi. Then, his sole focus can turn to the NTT INDYCAR SERIES, which will start its season just over two months later with the Firestone Grand Prix of St. Petersburg Feb. 27.