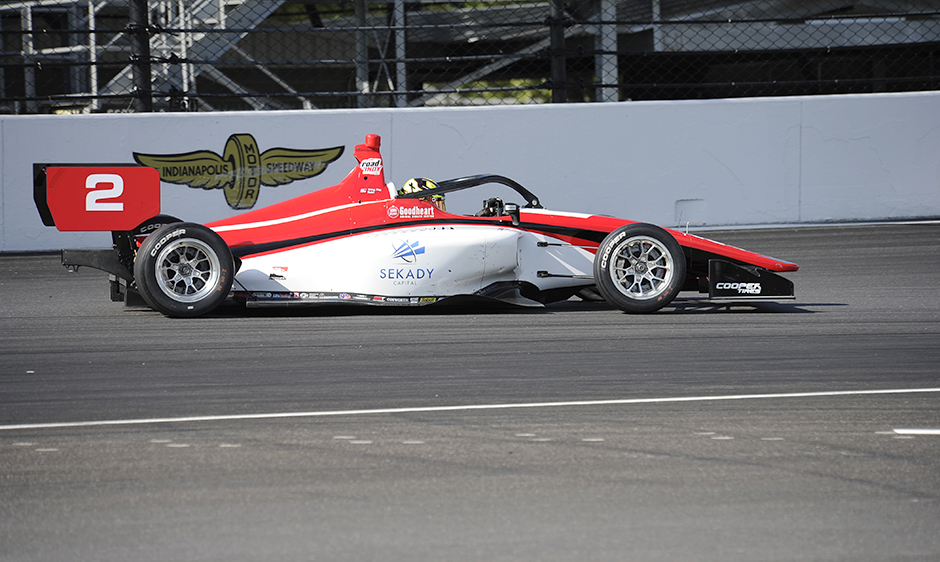 Sting Ray Robb is about to embark on his second season in Indy Lights presented by Cooper Tires, and if it goes as well as his final season in Indy Pro 2000 in 2020, he could again be called a series champion.

But that would just be a title, said the 20-year-old driver from Boise, Idaho. It does not define him.

“My identity is who I am, and (race results) are just side effects of what is going on in my life,” he said. “Last year, dropping down to finishing 10th (in race), we’re battling for last, we can’t finish a race – I had to realize I’m still the same person. I’m not a loser because I’m finishing 10th.

“More than on the track, I grew as a person, and it’s cool – really cool – to see what I’ve learned about myself in that area.”

Robb is now part of Andretti Autosport’s four-man assault on the Indy Lights championship. Along with Matthew Brabham, Christian Rasmussen and Hunter McElrea, Robb has an opportunity to regularly contend for race wins and the series title in a season that begins Sunday, Feb. 27 with the Grand Prix of St. Petersburg.

Robb’s self-adjustment is nearly two years in the making, beginning with the late July weekend in 2020 at the Mid-Ohio Sports Car Course.

In a second season with Juncos Racing, Robb had finished fifth, second, 10th and third in the opening races, and truth be told, he was doubting himself. Forty-eight races into his Indy Pro 2000 career, he still wasn’t a race winner, and he wondered if he ever would be.

He responded by taking a knee during the Mid-Ohio weekend.

“I was like, ‘All right, God, I have given you everything that I have, and I’m either not good enough or I just can’t get it right,” he said. “I’d been doing this for so long and trying to do it on my own, and I said: ‘I’m done, I’m giving it to you.’”

At that moment, a part of the Bible which speaks to trials and tribulations came to him.

“Consider it pure joy whenever you face trials of many kinds because you know that the testing of your faith produces perseverance,” Robb recited from the book of James. “Let perseverance finish its work so that you may be mature and complete, not lacking anything.”

He paused to reflect on how that changed his approach.

“I realized that after all these years, this long, drawn-out pain was for a good reason,” he said. “Even though it sucks in the moment, it’s going to make you who you’re supposed to be -- make you better for it.”

Robb won the next day’s race, part of a season-ending stretch that produced seven wins in 13 races to net the first series championship of his career.

“That was a light-switch moment,” he said. “OK, I was giving it (God), trusting Him and relying on my faith. I can realize people around me, rely on the opportunity given to me and just be thankful for it. I think that released a lot of the pressure to perform.

Robb had only one top-five finish last season in Indy Lights, but he knew circumstances around him weren’t ideal. The challenges of the pandemic struck Ricardo Juncos’ small team harder than most, and the competition was fierce with Kyle Kirkwood and David Malukas – both now NTT INDYCAR SERIES drivers – winning 17 of the 20 races. Linus Lundqvist, who returns to Indy Lights, won the other three.

Those contrasting seasons has Robb prepared to tackle what’s next.

“I’ve learned a lot about me, and I’ve learned how to get through those hard days at the racetrack,” he said. “If I were to have cruised through (last season) I don’t think I would be as good of a driver as I am now.”

Robb doesn’t have illusions this season will be easy. The competition is fierce, particularly within Michael Andretti’s organization. Brabham and Rasmussen have won USF2000 and Indy Pro 2000 season championships, with Rasmussen winning his in each of the past two seasons. McElrea finished third in Indy Pro 2000 last year, and the four drivers have exchanged the spotlight in offseason testing.

“Every driver is going to (have the same goal): It’s to win,” Robb said. “So, I think that we’re going to have to take it day by day. If you can win the day (at hand) you’re going to be doing something right.”