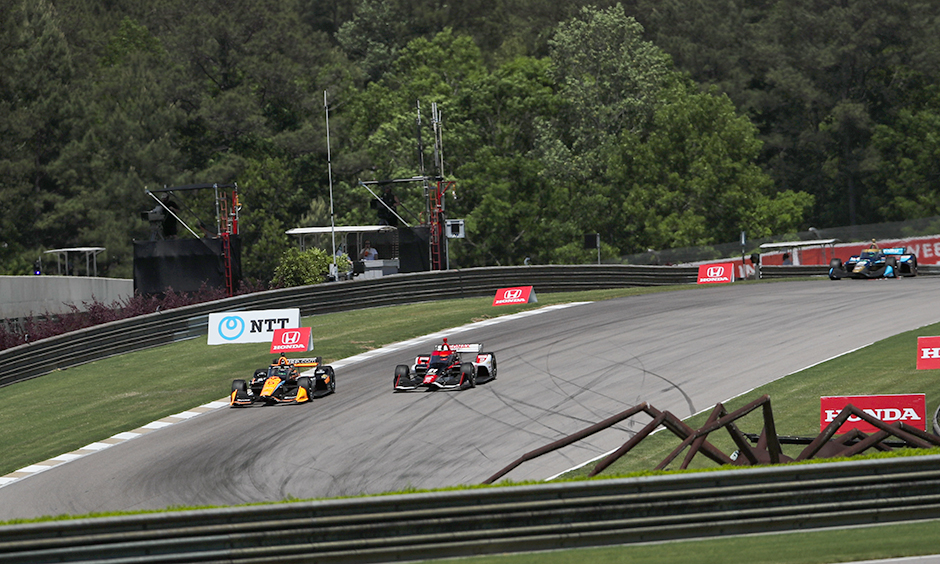 The Month of May started with a bang at Barber Motorsports Park as inclement weather held off and a sold-out Race Day crowd enjoyed a day of incredible racing in the Honda Indy Grand Prix of Alabama presented by AmFirst.

Pato O’Ward ended Team Penske’s dominant run to start the season by scoring his first win of 2022 with Arrow McLaren SP and his first victory on a permanent road course after wins on an oval and street course in 2021.

While it appeared the race was going to be a duel of two- vs. three-pit stop strategies in Birmingham, Alabama, a timely caution made it an all-out drive between O’Ward, Alex Palou and Rinus VeeKay for an exciting finish.

Allow us to shift our minds into fifth gear and unpack the 90-lap race at Barber Motorsports Park.

Shaping Up for Thrilling May, Summer

The top four drivers in the championship standings are just 10 points apart. How about that?

Alex Palou vaulted into the championship lead for the first time this season as he put together yet another consistent performance in the No. 10 The American Legion Honda with a second-place finish. And yet again, Palou leaves Barber with the points lead, just like he did last season when he won the race, which was the season opener in 2021.

The other king of consistency this season, Will Power, drove the No. 12 Verizon Team Penske Chevrolet to a fourth-place finish for the third time this season. Fours are wild for the 2014 NTT INDYCAR SERIES champion as sits fourth in the championship, just 10 points away from Palou.

In between the two most consistent drivers so far this season are Scott McLaughlin in second, who finished sixth in Barber, and Josef Newgarden in third, who had a rough day and finished 14th at one of his best racetracks.

Still, St. Petersburg winner McLaughlin is just three points behind Palou, and Long Beach and Texas winner Newgarden is nine points out of the lead. Not to mention, Sunday’s winner Pato O’Ward is fifth, 30 points out.

We are now one race through a grueling five-race stretch between May 1 and June 12 that includes the Indianapolis 500 presented by Gainbridge, which is worth double points. With 50 points awarded to the winner, there are 250 points available in the four remaining races, not including bonus points for the NTT P1 Award and laps led.

Alex Palou scored his third podium in four races so far this season and fourth top-10 finish of the year.

Defending NTT INDYCAR SERIES champion Palou is boasting a 3.5 average finish so far this season. That performance has been good enough to give him the championship lead heading into the Month of May.

At the site of his first NTT INDYCAR SERIES win at Barber Motorsports Park, Palou chased down Pato O’Ward at the finish but came up .9800 of a second shy of the Arrow McLaren SP driver. Palou led four laps.

“I was already really happy with the start of the season we had, and obviously another podium, another race where we were pushing it at the end, and almost got it,” Palou said. “It gives us some momentum, some confidence, some happy time.”

Palou has had great results this season, but he has been honest in his assessment of his Chip Ganassi Racing team struggling to put together full race weekends. Last weekend at Barber was a strong showing from start to finish, and it almost landed him in Victory Lane.

Now with the best average finish of anyone in the field, Palou looks to be getting hot as his Astor Cup title defense kicks into gear.

Unfortunately for him and the No. 21 SONAX Chevrolet team, they lost the battle on late-race pit stops and fell to third at the finish. VeeKay led the most laps of the day, pacing the field for 57 of the 90 laps.

VeeKay was hard on himself after losing out on what looked to be his second career NTT INDYCAR SERIES victory, realizing that he didn’t push hard enough on his out lap compared to O’Ward and placing blame on himself for not winning.

“I did beat him out, so we had a pretty good pit stop,” VeeKay said. “Unfortunately, I didn't push enough on that out lap. Another lesson learned. Unfortunately, the hard way.

“I have screwed myself a few times in the past braking a little too deep, locking a tire and basically destroying my whole last stint. I did not know Pato was going that deep. I was looking in my mirrors a lot. Maybe that distracted me a little bit. I don't know. If I could go back, I would go way deeper and stay ahead of him.”

It was a welcome performance for the Ed Carpenter Racing driver, who scored his first podium since finishing second at Belle Isle-1 last year. It was also his third top 10 finish in four races this season, a performance that has landed him seventh in the championship.

While the box score doesn’t represent it, the most impressive performance of the weekend at Barber Motorsports Park may have been produced by Callum Ilott and Juncos Hollinger Racing.

Ilott placed in the top 10 in all three practice sessions throughout the weekend, even being the fastest driver in final practice Saturday. He also qualified a career-best 11th in the No. 77 Juncos Hollinger Racing Chevrolet and was on time to possibly earn a spot in the Firestone Fast Six before Marcus Ericsson’s late spin ended the second round of qualifying while Ilott was on a flying lap.

Heading into Sunday’s race, the Brit was all smiles.

In the early stages of the race, Ilott jumped to eighth and ran as high as sixth before the first round of green flag pit stop cycles began. But on Lap 32, it all went downhill.

Entering Turn 9 and attempting to pass Helio Castroneves, Ilott carried too much speed and blew by Castroneves, spinning off course and getting stuck in the gravel trap. The incident cost Ilott two laps, and he finished 25th.

“We were having a great race,” Ilott said. “Bit of a shame to end the weekend like that. I feel sorry for myself and for the team. We had such a good car this weekend, so it’s a bit of a hard one. We will take the positives, as it was overall a great weekend up until that point. We had lots of pace, lots more than normal, so hopefully we can continue that momentum into Indy GP and see what we can do.”

While the box score shows a dismal finish, this was the kind of weekend Ilott needed to prove he could be a force in the NTT INDYCAR SERIES. It certainly showed why he was such a hot prospect in the Formula One world as a Ferrari junior driver.

Now, Ilott is doing a lot with the smallest team in the paddock.

While Sunday marked yet another Race Day for the NTT INDYCAR SERIES at Barber Motorsports Park, the date served as a more important day for legions of race fans and members of the paddock: May 1.

The Month of May is here, and soon the Indianapolis Motor Speedway will roar to life with nonstop racing action. It begins Friday, May 13 with NTT INDYCAR SERIES practice and qualifying, as well as Indy Lights Presented by Cooper Tires Race 1.

Indy Lights has the second race of its doubleheader Saturday May 14, and then NTT INDYCAR SERIES will compete on the 14-turn, 2.439-mile IMS road course for the GMR Grand Prix.

That all leads up to the preparation for the 106th Running of the Indianapolis 500 presented by Gainbridge. Opening practice is scheduled for Tuesday, May 17, with Race Day on Sunday, May 29.

Get ready, because the greatest month in racing is here.