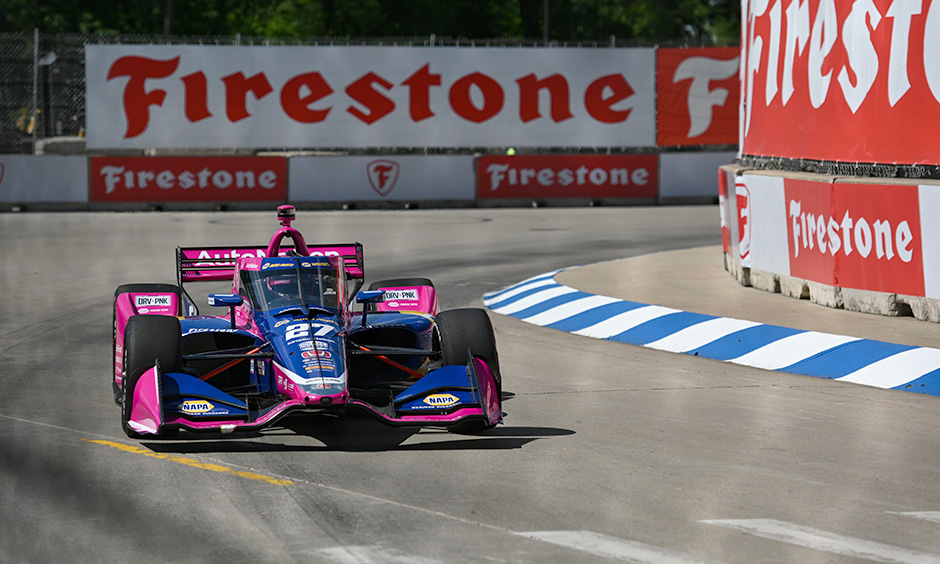 Alexander Rossi was the quickest driver in practice Saturday morning for the Chevrolet Detroit Grand Prix presented by Lear, aiming for his first NTT INDYCAR SERIES pole since 2019.

Rossi led with a top lap of 1 minute, 15.8101 seconds in the No. 27 NAPA AUTO PARTS/AutoNation Honda. That lap was nearly three-tenths of a second quicker than the best time posted in Friday practice, 1:16.1345 by rookie Kyle Kirkwood.

Rossi’s last career pole came in 2019 for race one at this track. Two of his six career poles have come at Belle Isle, as he also took the top spot in 2018 for race two at Detroit.

Four-time Indianapolis 500 winner joined Meyer Shank Racing teammate Pagenaud in the top five, clocking in fourth at 1:16.0412 in the No. 06 AutoNation/Sirius XM Honda. Rookie David Malukas overcame an incident with Kirkwood early in the session to round out the top five at 1:16.1180 in the No. 18 HMD Honda.

In quite a pendulum swing from Friday, Kirkwood had his practice cut short by an incident just three minutes into the session this morning.

Kirkwood and Malukas made side-by-side contact entering Turn 7, with the No. 14 ROKiT/AJ FOYT RACING Chevrolet of Kirkwood nosing into the tire barrier. He was unhurt. Malukas avoided contact with the barrier and continued after performing a U-turn in the runoff area.

“We had a mechanical (problem) from the start of the session,” Kirkwood said. “That’s why it put us into the wall. Unfortunately it’s not something we can fix on pit lane. I was ready to go back out.

“It wasn’t Malukas’ fault at all. I was trying to let him by. Unfortunately, I drove into him. That’s on us, for sure. We’ll be out there for qualifying.”

The tough practice continued for AJ Foyt Racing when Dalton Kellett slammed the concrete barrier in Turn 10 with the left side of the No. 4 K-LINE/AJ FOYT RACING Chevrolet 35 minutes into the session, triggering the second red flag of the practice. Kellett was unhurt.