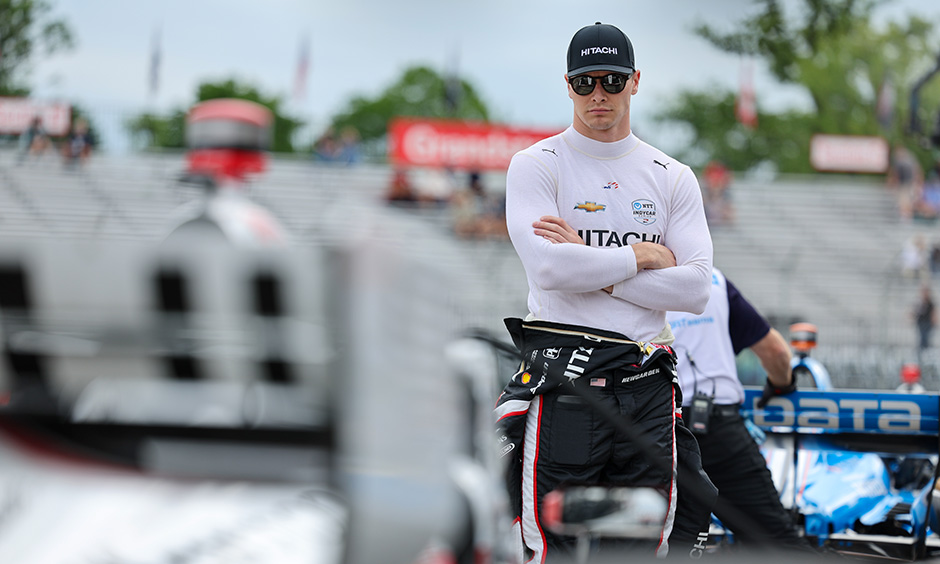 Josef Newgarden, the NTT P1 Award winner for Sunday’s Chevrolet Grand Prix of Detroit presented by Lear, didn’t need to say he was annoyed by the race to reflect that he was. But he went ahead and declared it. Twice, in fact.

Whether Newgarden would have won the 70-lap race with a different tire strategy would be a stretch, but he knew the one his Team Penske crew chose proved to be the wrong one.

Newgarden, like many of the highest-starting drivers, began with Firestone’s alternate and softer (red) Firehawks to not have them on his car at the end of the race, like was the case last year when he got overhauled by Pato O’Ward and lost a win with three laps to go. Meanwhile, teammate Will Power did the opposite, saving the must-use reds for the finish, and it worked out much to Newgarden’s chagrin as he finished fourth.

“It’s hard to not get annoyed,” the driver of the No. 2 Hitachi Team Penske Chevrolet told NBC Sports. “When we need a race to go all green, it doesn’t go all green. We needed that last year (when) we basically ran Power’s strategy last year, but it wasn’t the race to do it. Today would have been the day to do it. So, we tried not to do it today because of what happened last year.

“I don’t know what to tell you – we ran a good race. Strategy-wise, it didn’t work out … and I don’t think you can blame anybody. It’s typical INDYCAR: You can’t predict these things.

“It’s good to see a Team Penske Chevy get the win. (I’m) happy for Team Penske and Will, but it’s a little annoying.”

“It was throw the dice (on strategy) and see what works out,” the driver of the No. 5 Arrow McLaren SP Chevrolet said. “Power was on Josef’s strategy last year – it didn’t work for them last year, it worked for them this year. It’s a roll of the dice.”

Power was one of three drivers who finished the race on the red tires. The others were rookie Devlin DeFrancesco (No. 29 PowerTap Honda of Andretti Steinbrenner Autosport) and Dalton Kellett (No. 4 K-Line/AJ Foyt Racing Chevrolet), and they finished 18th and 20th, respectively.

It’s not often that a race’s seventh-place finisher enjoys watching another driver go to victory lane, but in this case Indianapolis 500 winner Marcus Ericsson felt Will Power “deserved” this win.

In last year’s Race 1 at Belle Isle, a red flag for Romain Grosjean’s crash brought the cars to pit lane. Trouble was, Power’s engine didn’t refire on first command, and the race leader had to give way to Ericsson and the rest of the field. Ericsson held on for the first NTT INDYCAR SERIES victory of his career. Power finished 20th.

“He deserved (a win) after what happened last year in Detroit,” Ericsson said. “That was very tough for him – good for me. I felt bad for him.

“It’s nice for him to celebrate in the fountain; I know the feeling. So, well done to him.”

Power and Ericsson are now 1-2 in the championship battle – separated by just three points -- heading to the eighth of 17 races this season. The Sonsio Grand Prix at Road America presented by AMR is at 12:30 p.m. (ET) Sunday, June 12, with live coverage on NBC, Peacock Premium and the INDYCAR Radio Network.

Rookie Kyle Kirkwood had his best NTT INDYCAR SERIES weekend spoiled by a crash early in Saturday morning’s practice, which injured his right wrist, and wall contact with the left rear tire in Sunday’s race.

In between, Kirkwood and Ben Barnicoat won the GTD division of the IMSA WeatherTech SportsCar Championship race at Belle Isle from the pole in the No. 17 Lexus of Vasser-Sullivan Racing.

While Kirkwood reapplied ice on the wrist immediately after getting out of the car following the Lap 49 incident Sunday, it was retiring from the race early that hurt the most.

“One little snap caught me out,” he said of the brush with the outside wall. “I’ve hit walls way hard than I hit just now. It ended up hitting just right, bending the (suspension). Super disappointing.

“It’s all on me, really. I feel so bad for the No. 14 ROKiT Chevrolet guys of AJ Foyt Racing because they had me on a fantastic (pit) strategy. We were looking at running on the reds less than everyone else, and I was expecting a top-10 finish there. It was just a big mistake on cold tires, for sure.”

Kirkwood, who earlier in the week was confirmed to replace Alexander Rossi next year in Andretti Autosport’s No. 27 Honda, finished 24th.