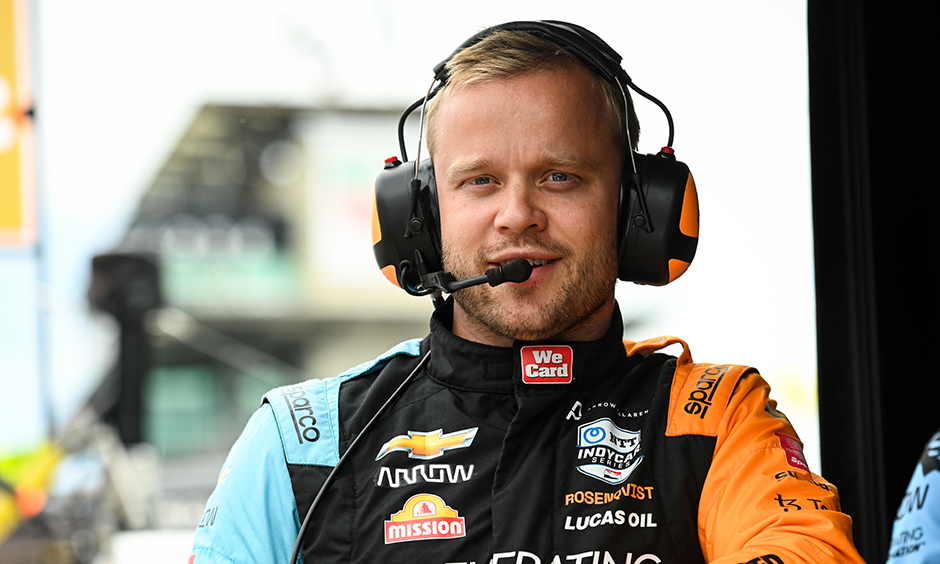 Felix Rosenqvist is producing the best stretch of his NTT INDYCAR SERIES career, and it’s making the Swedish racing star feel like his old self.

A sixth-place finish in last Sunday’s Sonsio Grand Prix at Road America presented by AMR gave Rosenqvist his fourth consecutive top-10 finish. It’s a run that started when he finished sixth in the GMR Grand Prix on the IMS road course last month, followed by a fourth in the Indianapolis 500 presented by Gainbridge and 10th in the Chevrolet Detroit Grand Prix presented by Lear.

The run has Rosenqvist feeling good heading into two off weekends before the NTT INDYCAR SERIES gets back in action at Mid-Ohio Sports Car Course Sunday, July 3 for the Honda Indy 200 at Mid-Ohio Powered by the All-New 2023 Civic Type R (12:30 p.m. ET, live on NBC and INDYCAR Radio Network).

But as any race car driver can attest, there could’ve been more.

“To finally come out the other end and be getting positive results from your work, I think that's always very rewarding,” he said. “But it's not like we won four races in a row or finished in the top five. I think that's just the nature of all of it, but everyone on the team, we always see what we could have done or what we can do.”

Rosenqvist’s 2022 campaign got off to a rough start in St. Petersburg. He qualified 21st and finished 17th, then followed it up with a pole at Texas, but a mechanical failure left him 21st. Since the third race of the year at Long Beach, Rosenqvist has shown solid speed, especially in qualifying.

He admitted that there were a few things he and his No. 7 Vuse Arrow McLaren SP Chevrolet team missed in the early part of the year. He said after he finished 16th at Barber Motorsports Park in May, he and the team sat down and had an honest conversation.

They discussed what they needed to do to improve their team, their running position and overall performance in what is a contract year for Rosenqvist. He said his biggest request was better communication among everyone.

The next week, Rosenqvist scored his first top-10 finish of the season on the IMS road course.

“If you want to put it down to one thing, I'd probably say communication has been better between everyone on the car,” he said. “At least that's what I told the team, like if you have anything you want to ask or you want to improve, just say it. We're all here to help each other, and we all believe in each other.

“We say so many times if we can just put everything together, we're going to be really good. And yeah, from that point it looks like we've been on a bit of a roll. I think that was kind of the turning point.”

Since that conversation, Rosenqvist has been running right with, or even in front of, his teammate, Pato O’Ward, in a refreshing run for the Swede after a difficult 2021 season that saw him finish 21st in the championship while O’Ward was a title contender down to the final race of the year in Long Beach.

Rosenqvist said this run takes him back to his rookie year in 2019, when he came out of the gate strong in for Chip Ganassi Racing, nearly winning his first NTT INDYCAR SERIES start with a fourth-place finish at St. Petersburg.

From there, Rosenqvist ran strong all year, including three consecutive top-10 finishes and ending the year sixth in the championship.

It was a strong year that turned a lot of heads and had Rosenqvist snookered into thinking every season was going to be as successful as 2019. The irony of it all is that Rosenqvist thought 2019 was a bad year.

“I got confused my first year because, my first race ever I almost won,” he said. “I think I didn't understand what was going to come after that with the ovals and different kinds of tracks and just the car in general, like how random it could be.

“I actually thought that was kind of a bad year at the time. I wanted to be winning more. I wanted to win races, and I wanted to finish in the top three in the championship. I had big goals for myself.”

He admitted that your best season to date being your first year “can be annoying at times,” but it’s also a reminder of what he can do. Rosenqvist still has those big goals, and he still believes he can achieve them. He scored his one and only NTT INDYCAR SERIES win in 2020 at Road America, but he feels like he’s on the cusp of another win.

The upcoming races on the schedule are a chance for Rosenqvist to continue his string of success and show more improvement as a team.

“It's important to not get greedy and not lose track,” he said. “I think there's still a lot of ifs and buts. You know, if we would have just done that differently, we could have had a really, really good result. It's so hard to get a good result, and the fact that we just been having consistent results is an indicator that there's going to be bigger things coming.”