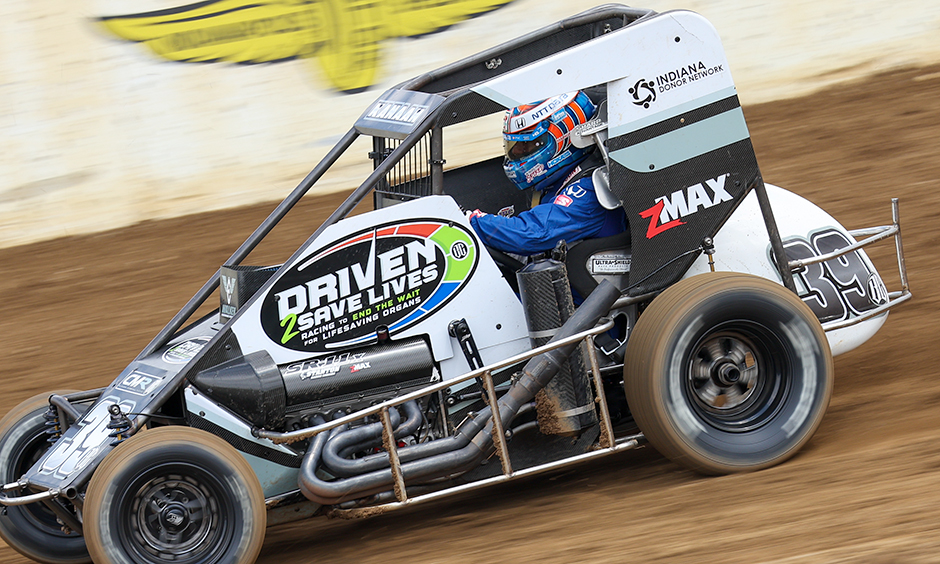 One of Tony Kanaan’s sons looked at the race car his father was about to drive Monday at Indianapolis Motor Speedway and came to a surprising realization. The speed pursuit at hand wasn’t going to be on the iconic oval where Kanaan won the 2013 Indianapolis 500.

“You’re going to run on a dirt track?” Deco Kanaan said. “Why not that (famous) track?”

His father laughed. Soon, it would be him who felt like a kid again.

Kanaan has raced all over the world, winning season championships in Indy Lights and the NTT INDYCAR SERIES. But until Monday on The Dirt Track at IMS, his experience on natural soil had been limited to two races in Tony Stewart’s SRX Series and a late model race at Eldora Speedway in Rossburg, Ohio.

Kanaan was invited to drive the No. 39BC midget of Clauson Marshall Racing in an experience he surely will never forget. The 47-year-old Brazilian had never driven a short-track, open-wheel car before, and it gave him a thrill along with a few sore muscles.

“It’s the fastest car I’ve ever driven,” Kanaan said without hesitation. “My heart rate -- I’m still shaking. It’s hard, physical. I mean, I prepare myself so much physically to drive an Indy car, and I felt like it was 50 laps here today, and I did 12. So, it’s a lot of work.

“You’re fighting the steering wheel, but what an awesome, awesome car to drive. I want to do it again.”

Kanaan completed 21 laps around the quarter-mile clay oval inside the big track’s Turn 3, which will host the Driven2SaveLives BC39 presented by WeatherTech for the fourth time Aug. 3-4. Kanaan’s laps were divided into segments, with nine in the first and 12 in the second. At the short break, he asked how many laps are in the BC39’s feature. He was surprised to learn there are 39.

“I have to say, now I understand why midget and sprint car drivers are so good in anything they do,” Kanaan said. “If you can drive this, you can drive any race car in the world. I will never complain about being loose (in an Indy car) in my life again after a few laps here.”

Kanaan said it was “crazy how fast” a midget feels on such a short track and how aggressively a driver has to work the steering wheel, especially compared to the precision required of an NTT INDYCAR SERIES track on the big oval at IMS.

“Here, you’re fighting the wheel on every lap, and if you don’t fight it, you’re slow,” he said. “It’s the opposite (in the NTT INDYCAR SERIES), really the opposite. I have to say this thing is 10 times more physical than an Indy car. Obviously, I was nervous and grabbing the steering wheel and holding on to it so tight, but it’s going to take me a little bit (to prepare) … if I want to race this thing one day.”

Clauson Marshall Racing co-owner Tim Clauson, the father of the late Bryan Clauson, who along with Tony Stewart inspired IMS officials to make The Dirt Track permanent, was impressed with how quickly Kanaan took to the different type of driving. Clauson said he would have been interested in fielding a car for him if Kanaan wasn’t committed to being in Nashville for sponsor commitments associated with the NTT INDYCAR SERIES’ Big Machine Music City Grand Prix on Aug. 5-7.

“You really got (the car) to rotate on the cushion, and then you got back to the gas,” Clauson told Kanaan.

Said Kanaan, “You can tell the momentum (that’s necessary).”

Even though Kanaan can’t compete in next month’s two-night BC39, one of the Indy 500’s most popular drivers will be on hand the first night to execute a series of demonstration laps, and IMS President Doug Boles is hoping to give him a ceremonial role.

Kanaan is just happy to have driven the car, and he said he felt a special connection to Driven2SaveLives initiative. Bryan Clauson was an organ donor who, through his passing in 2016, helped save the lives of five people who benefitted from the use of his organs. That is how the Clauson family became involved with the Driven2Save Lives campaign through the Indiana Donor Network, where Clauson’s sister, Taylor, works.

“I live in Indianapolis, and I am an organ donor,” Kanaan said. “When I got my (driver’s) license, I was proud to see that (designation) there.”

Tickets for the Driven2SaveLives BC39 presented by WeatherTech are on sale at https://www.indianapolismotorspeedway.com/events/usac/buy-tickets.