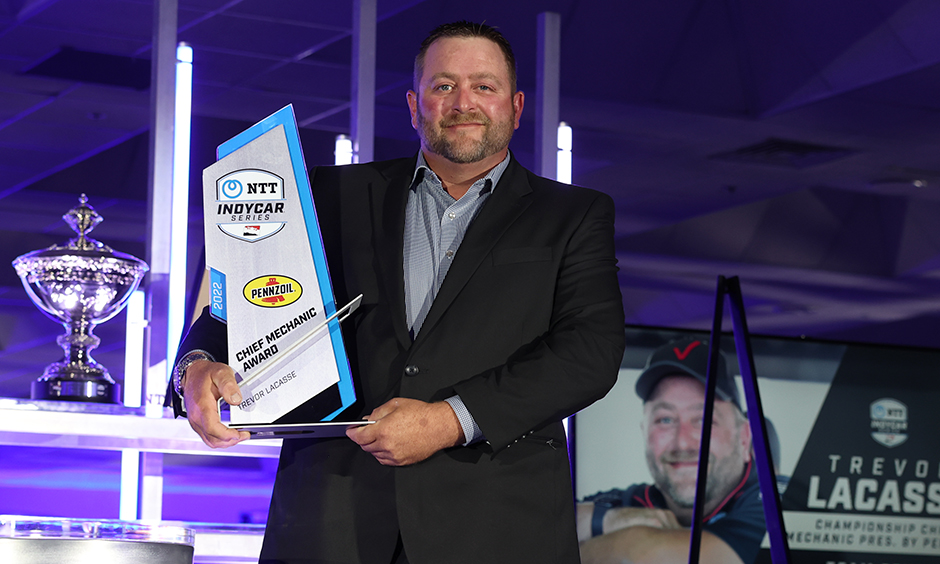 The legacy of a driver is generated with every breathtaking pass and victory on the racetrack, but that opportunity is created by those turning the wrenches to build the monuments of speed and four-wheel fury.

While Will Power bolstered his already sterling resume with a second NTT INDYCAR SERIES title in 2022, the crew members behind the scenes were a crucial part of the process. In the case of the squad of the No. 12 Team Penske Chevrolet, it all started at the top with chief mechanic Trevor Lacasse.

“We knew we had championship-contending pace last year without the finishes to show for it; We had several finishes outside of the top 10 throughout the first half of 2021,” Lacasse said. “This year we came out so strong, and it almost becomes contagious. I knew that if we just focused on what we could control – especially with the frame of mind that Will was in – that we would be a factor for the championship.

“Every year you go to St. Petersburg hoping that you are the one standing on the stage in Laguna Seca. I remember telling Will that very thing: We need to approach every weekend with the mindset that we need to make sure we can maximize our weekends and to give us a shot at Laguna. We got to Laguna this year, and I told Will, ‘Well, we made it to Laguna with a shot, now we go do what we have done all season.’ It was amazing, for sure, to end this year with a championship. All the guys that we had on this car this year were amazing.”

For his part in the title-winning effort, Lacasse was presented the Chief Mechanic of the Year award by Pennzoil. It was the sixth time a Team Penske mechanic earned the award but marked Lacasse’s first.

“There have been some great chief mechanics throughout Team Penske history,” Lacasse said. “Guys like Rick Rinaman and Matt Jonsson, Travis Law and Billy Vincent have played big roles in my career, and to put my name beside theirs with this award is very special to me. You learn so much from each of them, and without them we would not been able to do what we did.

“It is definitely a team sport and, honestly, I feel like this is a team award. The group we have on the No. 12 Verizon 5G Chevy is as good as I’ve been around. We have a camaraderie that doesn’t happen on every team in the paddock. It makes a huge difference.

“The cool part about standing on the stage Sunday night in Laguna was to think of all the racing that I have done over the years and the people that helped me and pushed me to be able to accomplish any of this. You have to think back to growing up in a racing family and all they did to help, but specifically my Dad and Mom. As a dad myself now I have a much greater appreciation for all they did.”

Lacasse is creating a legacy of his own, too.

He was one of the crew members on Juan Pablo Montoya’s victory in the 2015 Indianapolis 500. Then, in his second year as a chief mechanic in 2019, he returned to Victory Lane in “The Greatest Spectacle in Racing” with Simon Pagenaud to join legendary names such as George Bignotti and Clint Brawner. The journey came full circle at the conclusion of this season with Power, whom he originally started at Team Penske in 2010.

“I’ve been really blessed to work on great teams with great drivers during my career,” Lacasse said. “You have to learn from each position and responsibility you are given, and I definitely took something from each one of those. Montoya is different than Simon, who’s different than Will. They’re all world-class racers, but each go about it in a different way. I’m grateful for each of those experiences. They allowed me to become the best version of myself for this year’s team.

“My time at Team Penske has been a dream come true and to get to tell people that you work for Roger Penske is so cool. The effort that he puts into every detail of anything he does makes you want to strive to be better every day. When you look at all the success that we have had at Team Penske over the years, it’s all about the people here. Each one that you work with helps make all that possible.”