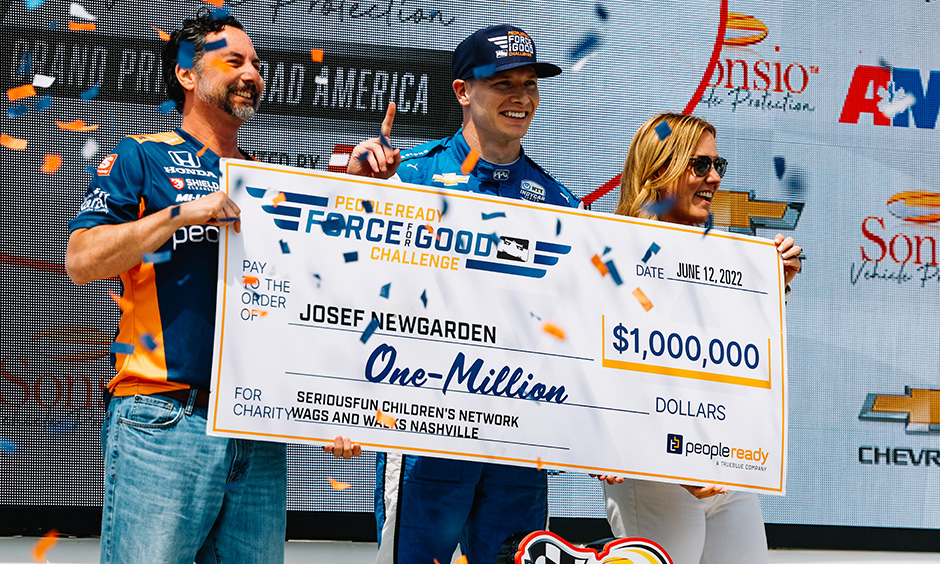 Josef Newgarden can be forgiven if he considers the 2022 NTT INDYCAR SERIES season as one that got away as he fell 16 points shy of his third championship. But the fact is, it was another year in a decade of excellence for the Team Penske driver.

Newgarden won a career-high five races, including one each on a street circuit and a road course along with three on oval tracks. Winning on each type of track earned him a $1 million bonus through the PeopleReady Force for Good Challenge. The prize was shared with the team and Newgarden’s chosen charities, SeriousFun Children’s Network and Wags and Walks of Nashville.

“To have something like this challenge fires you up more competitively (as) you want to get it done for (the charities),” Newgarden said after earning the bonus June 12 by winning the Sonsio Grand Prix at Road America. “You know it’s just a bonus and a plus for these two groups.

“I just know how impactful it is, so I get really competitive and want to make it happen.”

Newgarden’s first victory of the season came in dramatic fashion at Texas Motor Speedway. He had trailed McLaughlin through most of the XPEL 375 – McLaughlin led 186 of the 248 laps – but he scooted past his teammate on the outside in the race’s final corner. Newgarden led only three laps that night yet won by .067 of a second, the closest finish of the season.

His second win, on a street circuit, came in the next race. Newgarden was more in control of the Acura Grand Prix of Long Beach, leading 32 of the 85 laps. Then came the big payday at Road America.

Newgarden’s bid for another season championship took a hit in the Hy-Vee INDYCAR Race Weekend when, after dominating the Saturday race in victory with 208 laps led, he crashed late in the Sunday race while comfortably leading his 149th lap.

He also won the Bommarito Automotive Group 500 presented by Axalta and Valvoline at World Wide Technology Raceway for the third consecutive year and the fourth time in seven years.

Newgarden made a valiant charge to win the championship by racing from 25th to finish second in the season-ending Firestone Grand Prix of Monterey at WeatherTech Raceway Laguna Seca, but he couldn’t overall Team Penske teammate Will Power, who finished third. While it wasn’t the standing Newgarden desired, he still finished in the top two in points for the third straight year and the fifth time in six seasons.