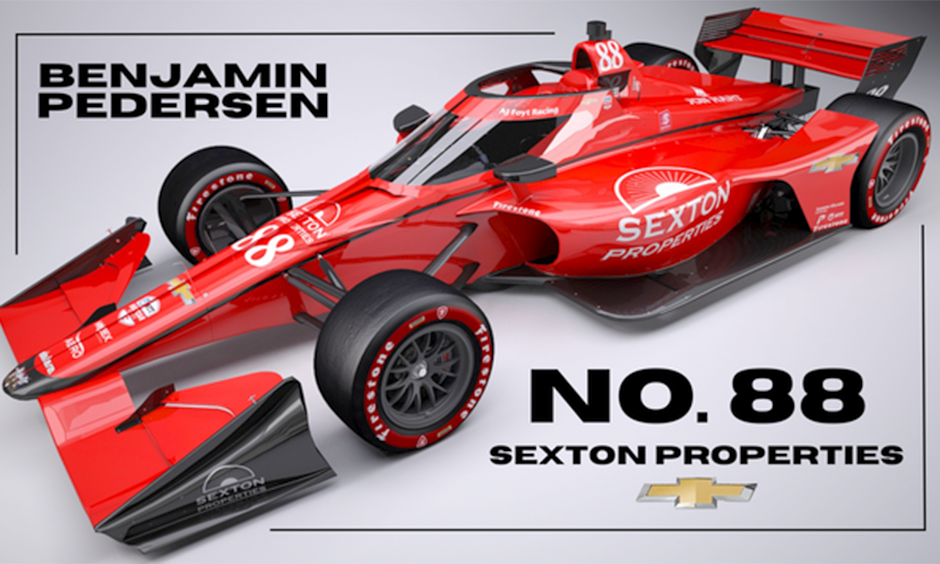 NTT INDYCAR SERIES rookie Benjamin Pedersen will drive the No. 88 Chevrolet this season for AJ Foyt Racing, with the new number for the team matching the age of Pedersen’s legendary boss.

Four-time Indianapolis 500 winner A.J. Foyt turned 88 on Jan. 16, part of the inspiration behind the choice of number by Danish-American driver Pedersen, a graduate from the INDY NXT presented by Firestone series. The car, which features sponsorship from Sexton Properties, is painted in the classic Coyote Red that’s synonymous with Foyt and his team.

“I am excited to get on track in Thermal (California) in just a few weeks with a livery that is recognizable with the iconic Coyote Red and a new car number to AJ Foyt Racing,” Pedersen said. “We wanted to keep with the traditional color and clean look that will resonate with fans of A.J. Foyt, while bringing a fresh new feel with the number 88. It's also a special week for the 88 as we celebrate A.J.'s 88th birthday.”

Veteran Santino Ferrucci is driving the No. 14 Chevrolet this season for AJ Foyt Racing.

The 2023 season starts March 5 with the Firestone Grand Prix of St. Petersburg presented by RP Funding. An Open Test will precede the opener Feb. 2-3 at The Thermal Club in Thermal, California.

Single-day St. Pete tickets on sale: Single-day tickets to the 2023 Firestone Grand Prix of St. Petersburg presented by RP Funding are on sale. Tickets can be bought online at gpstpete.com for the 19th annual event set for March 3-5 in downtown St. Petersburg.

Fans will experience nonstop racing action at this year’s event, which features 10 races from six different series, including the NTT INDYCAR SERIES and INDY NXT by Firestone. Daily general admission tickets are $25 for Friday, $45 for Saturday and $60 for Sunday. Single-day grandstand seats are $120 for upper rows and $95 in lower rows. Junior pricing is available for ages 12 and under.

Multiday tickets remain available for purchase for those fans wanting to attend all three days of the event weekend. A 3-Day general admission ticket offers the best value at $65, and 3-Day grandstand seats are $155 and $125 for upper and lower rows, respectively.

Tickets for the Acura Grand Prix of Long Beach are on sale at gplb.com. Prices range from $38 for a Friday general admission ticket to $175 for a three-day ticket that includes Saturday and Sunday reserved seating in grandstand upper levels.

Winners will be announced at an event Feb. 1 in London. The nominees in the category are the FIA Motorsport Games and the Jaguar Formula E Gen 3 launch.

Chadwick stays connected with Williams: INDY NXT by Firestone rookie Jamie Chadwick will balance her first season in the series with continued work with Williams Racing in Formula One as part of the team’s driver academy.

Three-time W Series champion Chadwick will work on the team’s simulator throughout the year when it doesn’t clash with her INDY NXT commitments.

“We’re very excited to have Jamie continuing as a core part of our driver academy at Williams Racing,” said Sven Smeets, Williams Racing sporting director. “She’s an incredibly talented driver and an important role model in inspiring the next generation of females in motorsport. We look forward to supporting her in 2023 while she takes on the new challenge in INDY NXT.”