INDIANAPOLIS – Entering the Indianapolis 500 presented by Gainbridge for a 27th time, Chip Ganassi Racing is still shooting for the stars this month of May.

Fielding 2008 Indy 500 winner and five-time NTT IndyCar Series champion Scott Dixon as well as impressive rookie Felix Rosenqvist, the team is feeling confident on the eve of qualifying for the 103rd running of “The Greatest Spectacle in Racing.”

Team owner Chip Ganassi has been coming to Indianapolis Motor Speedway since he was an Indy 500 rookie driver in 1982. He was part of the ownership group when Emerson Fittipaldi won the race in 1989, a year before Ganassi launched his own team. After all this time, he still feels the buzz and excitement that comes this time each year.

“Everybody is here. Everybody understands the enormity and what's at stake here. It's really just a lot of fun,” Ganassi said Friday. “I look forward to it every year. I don't know that it's a goose bump kind of thing for me, but it's certainly something I look forward to every year.

“Each year you look forward to coming back and being a part of it. It's a time to focus on what you've been working on over the winter, everything from working hard, going racing, to being with your friends and colleagues and team,” he added.

Dixon, attempting to race in his 17th Indy 500, is focused on achieving the win on the 2.5-mile oval. But the reigning series champion is also aware how important this double-points race is to the big picture. Qualifying near the front of the 33-car grid this weekend would be a solid first step.

“Now is definitely the time to strike,” Dixon said. “Winning an Indianapolis 500 definitely helps the championship. They go hand in hand. So, yeah, that's all we're thinking about right now, is today.”

The one time that Dixon won the Indianapolis 500, 11 years ago, he went on to collect his second season title. He’s all for doing it again in the No. 9 PNC Bank Honda.

“Why not both? That's why we're here, right, is to get both. Chip sets those goals every year,” Dixon said. 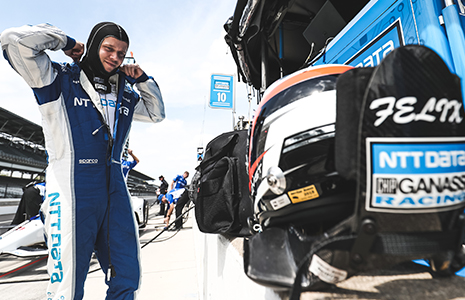 Rosenqvist, who won the pole position for the INDYCAR Grand Prix on the IMS road course a week ago, has had an eventful beginning to his oval racing career. The 27-year-old Swede crashed in the No. 10 NTT DATA Honda on Wednesday, which resulted in a big impact and heavily damaged car. The team was forced to prepare his backup car for use in qualifying and the race.

“We're on the spare car, which is a different car. Obviously, it feels a bit different. … You just need to work on the car, getting it into the sweet spot again where it feels comfortable. No matter how long that takes, that's what you’ve got to do.”

Changing weather conditions this week have made all teams search for the right setup at the right time. The warmest day of the week is forecast for Saturday, the first of two days of qualifying.

“Qualifying is going to be tough this year, I think. Just with conditions, it's going to be pretty grueling for a lot of teams and ourselves,” said Dixon, who is six points behind championship leader Josef Newgarden heading into qualifying. “As normal, (we’re) trying to cover all the bases, but also trying to be the fastest.”

Qualifying offers nine points to the pole sitter, descending a point for each position down to one point for ninth.