Something marvelous happened to JR Hildebrand during his return to a fulltime NTT IndyCar Series schedule in 2017, and it went well beyond his two podium finishes driving for Ed Carpenter Racing.

The rest of that season was something many racers might rather forget. Besides a third place at Phoenix and second at Iowa, Hildebrand struggled to finish in the top half of the field most weekends and ended the season 15th in points. The learning curve was difficult in a downforce package much different than what he’d last raced fulltime, and the challenge of six tracks in 2017 that weren’t on the schedule in 2012 was daunting. 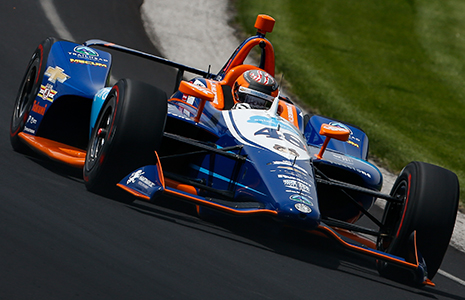 Instead of bemoaning the situation, Hildebrand embraced it. And he rediscovered what made him love the sport in the first place.

“I always enjoy when you have to figure out how to do something different and learn something new, and see that come to fruition,” Hildebrand said. “A couple of times during the season I had these breakthrough moments when I realized I got better because I figured out how to do something different and wrap my head around it. It kind of made me think, ‘Why is this the only thing I’m focused on?’

“After racing fulltime in the IndyCar Series in ’17, I just really felt like I wanted to try some more new things. It took being so embedded in that one thing for me to really realize that there’s so much more out there. I thought to myself, if I really go and do something completely different, this learning process would be, like, on steroids.”

The next year, without a fulltime ride, Hildebrand did something about it. He embarked on a bucket-list year of racing discovery that yanked him out of his comfort zone and reminded of an era when drivers would climb into anything, anywhere, on any surface.

Less than a month after he finished 11th in the 2018 Indianapolis 500 for Dreyer & Reinbold Racing – the team he returns for in this year’s race – Hildebrand wheeled a Porsche up 12.42 miles of switchbacks in the Pikes Peak International Hill Climb, where a one-off has an entirely different, and potentially devastating, meaning.

In August, he planted his right foot into the throat of a 1,000-horsepower 1968 Chevrolet Camaro on the Bonneville Salt Flats and, with a pass of more than 221 mph, earned his Category A license. If 221 in a straight line doesn’t seem sexy for a driver accustomed to 240 entering Turn 1 at Indy, consider what Hildebrand had gotten himself into at Bonneville. Steering an old-body muscle car – with narrow tires, on salt – at that speed felt like wrestling a wobbly-wheeled shopping cart skating back and forth on a narrow aisle.

Had a great time contributing to this year's Road & Track PCotY issue - plus I got to hustle some of the fastest equipment around! Driving these machines really drove home the fact that we live in an automotive reality where performance that's usable in real-world driving is nearly ubiquitous. The things that really separate contemporary performance cars, the things that make you lust after one and feel indifferent about another, revolve more and more around how they create for your holistic driving experience behind the wheel than how fast they go. It became clear that for me it's not the bells and whistles or creature comforts, nor is it the often theatrically-suggestive colors, modes and racing belts. It's whether or not the car can unleash all its performance to give me those really f*cking excessive moments of deep, visceral driving euphoria without getting in it's own way... and maybe - just maybe - it actually enables me to have those experiences in a new or more powerful way. They're few and far between, but a future with cars designed for *that* is one I'd sign up for in a hurry. • 📸: @puppyknuckles @richardpardon #roadandtrack #pcoty #mclaren #senna #ferrari #488pista #porsche #GT2RS #corvette #ZR1 #bmw #M5 #audi #RS5 #alfaromeo #stelvio #mercedes #amge63

“I haven’t done any of this with the intent to re-establish a brand,” he said. “I felt like I needed to get back to trying to generate that feeling I had the first time I raced a go-kart; the sensation of newness and that everything’s a little chaotic, you really feel the speed and every little brain synapse is firing to try to keep up.”

If 2019 brings more of the same, Hildebrand will be a happy guy.

He returns for his ninth Indianapolis 500 presented by Gainbridge, where he will start 21st in the No. 48 DRR Salesforce Chevrolet on Sunday. He’ll strap back into a Porsche at Pikes Peak in June. He hopes to drive again at Bonneville in August, plus just about anything, anywhere that will maintain his racing pulse. He’d love to drive a rally car, even on snow and ice, and gladly would broadslide just about anything on a dirt track.

“The goal was getting back to what made me fall in love with racing in the first place, which was its diversity and the fact there are so many different aspects of the sport, different types of cars to drive and different types of driving challenges,” he said.

So stoked for this to be my playground next week! After seeing the course up the mountain for the first time I can't believe it's taken me this long to run it, and can't wait. Will be running in the Cayman GT4 Clubsport class - a great opportunity to work with @porschecolorado and @porschecustomerracingna - A different kind of challenge for sure but what an awesome one! More to come... @porsche • @ppihc1916 • @urbanarmorgear • #pikespeak #ppihc #porsche #pmna #porschecolorado

Few events are as different as Pikes Peak, a 156-turn, 12.42-mile climb to the sky in Colorado Springs, Colorado. Racers have challenged the mountain since 1916. Among those who’ve won there are among Indy car racing’s best – 13-time overall winner Bobby Unser, three-time winner Al Unser and their uncle, nine-time winner Louis Unser – plus Mario Andretti in 1969, Roger Mears in 1972 and ’73, and Rick Mears in 1976 when the road was dirt.

It’s all paved now, but no less challenging considering the speed and lurking danger. There are no SAFER Barriers on the mountain; just a few guardrails and, of course, steep drops just beyond the pavement.

“There is nowhere friendly to go off the course,” Hildebrand said. “If you go off any corner, you’re probably going to destroy your car.”

He finished 29th overall last year and second to Travis Pastrana in the Porsche Cayman GT4 Clubsport class. It was a good rookie showing, especially considering racers were limited on practice days to running only one third of the course at a time. He never made a full pull, from bottom to top, until his run on race day.

“It was the type of thing that you either instantly fall in love with or realize you aren’t quite as willing to deal with the fact that it’s as crazy as it is,” Hildebrand said.

He left the mountain yearning for more.

“I had three major realizations,” he said. “One, why didn’t I do this 10 years ago? Two, I wish I had done it when it was dirt just to have known what that was like. And three, I should do more of this. Before it was over, I was already thinking, ‘How do I come back here in something on slicks that has some downforce that really would be fast?’”

One thought entered his mind: What about an Indy car?

Besides a heavy Indy car heritage with such names as Unser, Andretti and Mears having won at Pikes Peak, there’s a connection with the cars themselves. Mario Andretti drove a Brawner Hawk rear-engine Indy car, outfitted with knobby-tread tires to grip the dirt surface, to fourth place in 1968 (he won the following year in a Grant King-owned upright dirt car).

“I made some immediate inquiries with active Indy car teams,” Hildebrand said. “The trickiest thing is that it’s not an insignificant task. You’ve got to build a roll cage per the rules and there’s some definite engineering involved. But it made me think how awesome it would be if you could do Indy and then three weeks later show up at Pikes with basically the same car.”

As if Pikes Peak was enough departure from Hildebrand’s norm, what he jumped into last August delivered a much different racing rush.

Got my "A" license (200-249mph) on the long course this morning - a little gusty and really felt like I had to drive the damn thing!! Maybe '68 Camaros weren't really meant to go 220? What a cool experience. I'm outta here but I'll be back for that Unlimited license. 😎🤙🏻 (Big thanks to Jack, Steve, and his band of Ozzies for letting me run the car!) #bonneville #bonnevillesaltflats #speedweek #speedweek2018 #landspeedracing #saltfever #gopro

He drove a highly modified 1968 Chevrolet Camaro down the Bonneville Salt Flats in Utah to a trap speed of 221.264 mph, satisfying the requirement of 200-249 mph needed to earn his Category A license from the Southern California Timing Association.

A year earlier, Hildebrand had used an off weekend on the NTT IndyCar Series schedule to make his first trip to the salt flats, strictly as a spectator. He discovered a unique, bizarre, magnetic motorsports culture that he wanted to become a part of as a driver.

“It’s like Burning Man for gearheads,” Hildebrand said. “One of my takeaways after being there was, ‘Man, you can run anything here.’ There’s a class for everything. I decided I was going to come back, but I wasn’t going to come back unless I’d lined up something to drive.”

He returned last August, driving the Camaro owned by Indiana businessman/racer Jack Rogers and prepped by noted hot rod builder Steve Strope. As a first-timer to that kind of racing, he needed to show his proficiency to officials much like the rookie orientation program at Indy. He first had to make a pass at less than 150 mph, next between 155 and 175, then 175-199. To achieve his Category A license, he had to run between 200 and 249 mph.

For someone with Hildebrand’s background, what could be so hard about that?

“I was probably kind of an a-hole in terms of how I was thinking about it,” he said. “I was like, ‘I’ve gone through a corner at 240. Can’t they just credit me for that somehow?’ The answer was basically no.”

He learned why during his first pass in the Camaro.

“It could not have been more different than anything I’ve ever done my entire career,” he said. “It’s a ’68 Camaro that’s got a Double-A fueler-sized hood scoop on it. You can’t see anything to the right of the car at all because of this enormous intake cowl. It’s got a drag racing four-speed transmission; you keep going forward and backward on the shifter. You’ve got parachutes that you have to use. And you’ve got a thousand horsepower going through these little four-inch-wide rear tires.”

Or, in a more succinct description: “The whole thing was totally weird,” he said.

It left him wondering how he can show up at Pikes Peak and win the thing outright (he’s in the planning stages of a purpose-built car for the mountain next year). And, what will it take at Bonneville to earn a Hot Rod Magazine trophy for the fastest pass of the week?

“As a professional race car driver, that’s instantly where my head went after each of those,” Hildebrand said. “It was a nice lesson for me in that those entry-level experiences were so cool and so totally worth it, and they were liberating in a way. It made me remember why I’m doing this.”