Innovation, ingenuity and talent have been constant hallmarks of the people who have produced General Motors vehicles through the decades, and those qualities are taking on a new dimension to help in the global fight against the coronavirus (COVID-19).

GM has transitioned two of its manufacturing facilities into production of critically needed ventilators and face masks in the last four weeks. Ventilators are being produced in the GM facility in Kokomo, Indiana, while face masks are being made in the facility in Warren, Michigan.

The Chevrolet division of GM is an Official Partner of INDYCAR and serves as the Official Truck and Official Pace Car of the NTT INDYCAR SERIES. Chevrolet is one of the two engine manufacturers in the series.

GM and American medical device company Ventec Life Systems are teaming up to build 30,000 desperately needed ventilators under contract with the U.S. Department of Health and Human Services at the facility in Kokomo, located about 60 miles north of the Indianapolis Motor Speedway. GM was able to leverage its manufacturing expertise and supplier relationships to locate hundreds of parts for these units in a little more than a week. 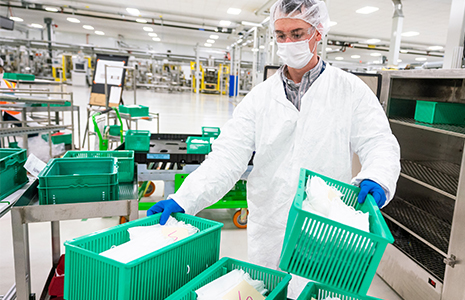 The V+Pro is a portable unit that can run on battery power, important factors for medical professionals in non-traditional locations, such as field hospitals that lack pressured air supply and other normal hospital functions.

More than 1,000 GM workers are engaged in this vital mission to build ventilators, helping to meet the needs of the nation during this global pandemic. GM and its talented workforce are fully capable and ready to use its extensive expertise, manufacturing and purchasing power, and supply chain to build more units if needed.

“Thousands of men and women at GM, Ventec, our suppliers and the Kokomo community have rallied to support their neighbors and the medical professionals on the front lines of this pandemic,” GM Chairman and CEO Mary Barra said. “Everyone wants to help turn the tide and save lives. It is inspiring and humbling to see the passion and commitment people have put into this work.”

Face masks are another vital piece of medical equipment in short supply across the world during the COVID-19 pandemic.

With the help of engineers, designers, buyers and manufacturing personnel, GM converted its facility in Warren, Michigan, in less than seven days to produce masks. Workers are projected to produce up to 50,000 masks per day in the facility’s ISO Class 8-equivalent cleanroom, or up to approximately 1.5 million each month. Delivery of the masks already is underway.

Ingenuity played an important role in the quick conversion of the facility to mask production. GM worked with automotive suppliers to develop the three layers of fabric in the masks. These companies typically provide GM with sound-deadening insulation found in doors, headliners and trunks, but they quickly changed their production processes to help manufacture these desperately needed masks.

GM also is assisting in the fight against the coronavirus by sharing its unique, efficient production plans for masks with the Michigan Manufacturers Association, an organization with nearly 1,700 companies across all industries. This will help a variety of manufacturers accelerate efforts to build masks.

This is not the first time GM and the American auto industry, at large, has quickly shifted its production to aid a national and global fight against a crisis.

During World War I and World War II, the auto industry shifted production from passenger vehicles and parts to vital equipment for the military.

During World War II, GM facilities were transformed into the “arsenals of democracy” encouraged by President Franklin D. Roosevelt, building an impressive assortment of military equipment. No passenger cars were manufactured in GM facilities between Feb. 10, 1942, approximately two months after America entered the war, and Sept. 9, 1945, exactly one week after the war ended with Japan’s surrender.