A week after its marquee event, the 104th Indianapolis 500 presented by Gainbridge, the 2020 NTT INDYCAR SERIES continues with a doubleheader this weekend at World Wide Technology Raceway near St. Louis.

The Bommarito Automotive Group 500 will pit 23 drivers in a pair of 200-lap races on the 1.25-mile oval on Saturday and Sunday (Both races air live on NBCSN at 3 p.m. ET each day.)

Here are 5 Things To Look For at the Bommarito Automotive Group 500.

The Final Push for the Astor Cup

There are five races remaining in the 2020 NTT INDYCAR SERIES season, but there could be as many as seven still to run. Regardless, the paddock’s focus for the remainder of the 2020 season is the series championship and stopping Scott Dixon.

But don’t just hand another crown to Dixon and Chip Ganassi Racing.

Five-time NTT INDYCAR SERIES champion Dixon has only won once at any of the three venues that will host the series’ final five scheduled races – World Wide Technology Raceway, Indianapolis Motor Speedway road course and Streets of St. Petersburg. That one win came July 4, when Dixon won the GMR Grand Prix on the road course at IMS.

Still, the odds are in his favor.

In addition to his win on the Indianapolis road course earlier in the year, Dixon produced podium finishes in 2017 and ’18 at WWT Raceway and four consecutive top-seven results at St. Petersburg, including second last year.

Dixon's 84-point advantage is the largest championship lead this late in the season since 2008 (if there are five races left). Simon Pagenaud led Josef Newgarden by 73 points in 2016 for the previous largest lead.

Dixon also is the driver with the biggest comeback in that span. He overcame a 49-point deficit in the final five races on Juan Pablo Montoya in 2015. 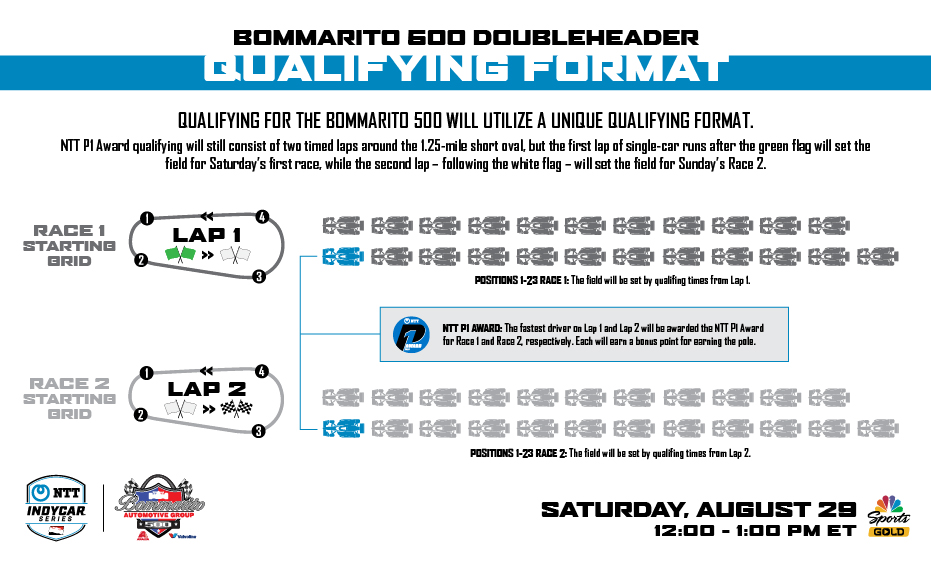 For the third time this season, the NTT INDYCAR SERIES will conduct a doubleheader weekend, with two championship points-paying races Saturday and Sunday.

Qualifying for the Bommarito Automotive Group 500 will use the unique qualifying format that debuted earlier this season at Iowa Speedway.

NTT P1 Award qualifying (Noon, Saturday on INDYCAR Pass on NBC Sports Gold) will still consist of two timed laps around the 1.25-mile oval. The first lap of single-car runs after the green flag will set the field for Saturday’s first race, while the second lap – following the white flag – will set the field for Sunday’s Race 2.

The pole winner for each race will receive the NTT P1 Award and earn a bonus point that accompanies the award.

It's a Team Penske track

Cars owned by Roger Penske have claimed five victories at WWT Raceway, including wins in 2017 and 2018 with Josef Newgarden and Will Power, respectively.

Newgarden, who won the NTT P1 Award at the track in 2019, was in contention for a second WWTR win last year before he was done in by an alternate strategy used by top finishers Takuma Sato, Ed Carpenter and Tony Kanaan.

“I’m really excited for Gateway,” said Newgarden, who hopes to use another strong weekend at WWTR to gain ground on Dixon in the championship race. “While Indy was a really tough race, we had a decent finish, but it just wasn’t our year. We had a really strong car and learned a few things we’re going to try on the Hitachi Chevy this weekend at Gateway. It’s a much smaller oval than Indianapolis, so it can be a tricky race, and this weekend is a doubleheader, so we’ll have two chances to win there. We really need a solid weekend to keep racking up points for the championship, so that will be a huge focus for us.”

Last season, Takuma Sato, Ed Carpenter and Tony Kanaan used an alternate strategy to take the podium positions at World Wide Technology Raceway, and it could be another weekend for some of the NTT INDYCAR SERIES’ smaller teams to shine.

Conor Daly returns to Carlin for the doubleheader weekend. The Carlin-Daly combination scored a sixth-place last season at WWTR. This season, Daly has notched his first career NTT P1 Award at Iowa Speedway and season-best finish of sixth at Texas in the No. 59 Gallagher Carlin Chevrolet.

“It’s been a lot of fun being back with Carlin this year for the ovals, and we’ve had really a strong run as a team together so far, so with this being our last oval of the season, I want to make sure we finish it on a high note,” Daly said.

Daly has a pair of top-six finishes in his three starts at WWTR, finishing fifth for AJ Foyt Racing in his first start at the track in 2017.

“I’ve honestly been looking forward to getting back to World Wide Technology Raceway since the checkered flag waved there last year,” Daly said. “It’s definitely one of my favorite tracks on the NTT INDYCAR SERIES schedule, and after how well we did last year at WWTR, I’m confident that the No. 59 Gallagher Carlin Chevrolet will be great again this year.”

Another driver who could be considered a dark horse is Santino Ferrucci.

“We’re coming off the Indy 500 with huge momentum heading into the Bommarito Automotive Group doubleheader,” Ferrucci said. “I’m super confident we can build on that momentum. We felt like we had the race won last year, leading almost 100 laps. So, I’ve been waiting to get back there ever since. I think we have a really good chance at getting a win, especially with the doubleheader format.”

Sato goes for a double

The races following the Indianapolis 500 haven’t been kind to the winner of “The Greatest Spectacle in Racing,” especially the doubleheader races that have routinely followed the Indy 500 since 2013.

Since 2011, the Indy 500 winner has an average finish of 10.2 in the doubleheader races that follow Indianapolis (Dan Wheldon didn’t compete in Texas in 2011) and has only finished on the podium twice in that span – Dario Franchitti finished second at the Raceway at Belle Isle Park in 2012, and Will Power finished second in the second race at Belle Isle in 2018.

Still, Sato heads into this weekend’s doubleheader as the most recent INDYCAR winner at the 1.25-mile oval at WWT Raceway.

“Last year’s race was a special one,” he said. “St. Louis is a great track. It’s quite challenging. Turn 1 and 2 and Turns 3 and 4 have quite different characteristics, and that makes for great fun for all of us. Last year it was such a special moment. We had a difficult week the week before and leading up to the event was a tough situation, but I was so pleased with the warm welcome at the venue. So many fans came up to me and cheered us on. What an amazing race result with the win. Even though it was midnight, so many fans remained for the podium.

“Once again, a great strategy worked, and the No. 30 team was extremely strong. I was very proud of that moment. It is good to return to defend our win after having just won the Indy 500 for a second time.”